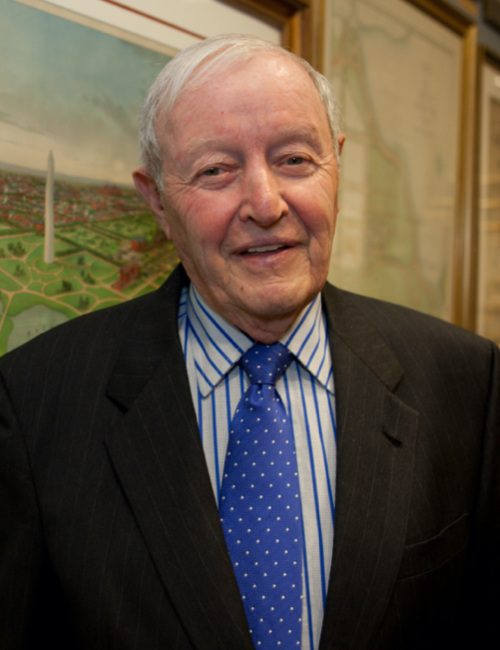 Monumental Achievement: In his 90s, Albert Small retains his passion for real estate development and philanthropy. He is president and CEO of Southern Engineering Corporation, the company he cofounded in 1950, which has built more than 20,000 buildings throughout the Washington D.C., metropolitan region. A dedicated collector of historical documents, Small has donated swaths of his collection, including gifting his trove of documents about the formation, development, and history of Washington, D.C., to GW where he created a museum about the creation of the nation’s capital. He was recognized with the National Humanities Medal in 2009.

"My lifelong love of America and our nation's capital city where I grew up learning about Pierre L'Enfant's plan  for Washington, D.C., and the leaders who helped to shape our country led me to donate to George Washington, making accessible my Washingtoniana collection of historical documents, manuscripts,  photographs and maps to the students of GW. It is my hope to inspire future generations of students by broadening their understanding of history and its important lessons. Thank you for this honor and recognition as a Monumental Alumnus at GW. I am grateful for this opportunity to give back and to be part of  this special community."

Albert Harrison Small is president of Southern Engineering Corporation. He has developed millions of square feet of office space, apartment communities, and single-family homes in Washington. He has served on many civic and cultural boards, including those of the National Trust for the Humanities, the National Symphony Orchestra, the National Gallery of Art, the Foundation for the National Archives, and the James Madison Council of the Library of Congress. He holds an honorary degree, doctor of public service, from the George Washington University, awarded in 2016. He was a 2009 recipient of a National Humanities Medal, presented by the National Endowment for the Humanities to individuals and groups whose work has deepened the nation's understanding of the humanities.

In 2019, the George Washington University became the home of the Albert H. Small Normandy Institute. Mr. Small established the Normandy Institute in 2011 to honor the World War II soldiers who died in the 1944 D-Day Campaign. The institute sends teams of high school students and their teachers to Normandy, France, after participating in a series of lectures by GW history professors and conducting research on a fallen solider from their respective hometowns.

In 2011, Small received the President’s Medal from the George Washington University in recognition of his efforts to enhance cultural and educational opportunities.

Small graduated from the University of Virginia School of Engineering and attended the George Washington University Law School and the American University Graduate School of Business.