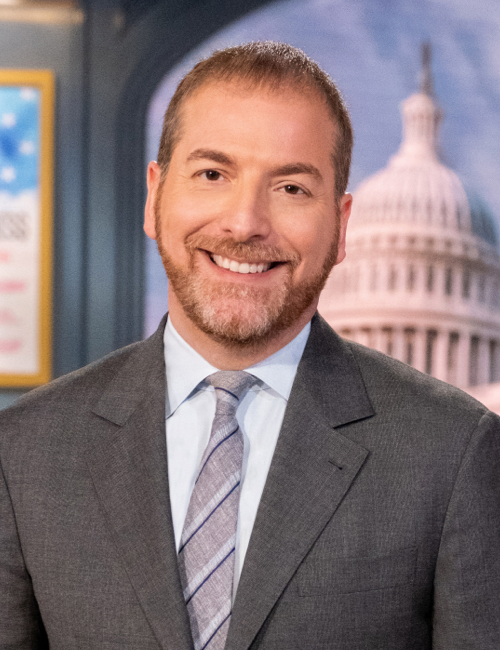 Monumental Achievement: Nationally recognized television journalist Chuck Todd is the moderator of NBC News’ Meet the Press, and political director for the network. Todd is also a primary anchor for the network’s primetime election and political coverage and has moderated presidential debates for NBC News and MSNBC. Prior to his current role, Todd was chief White House correspondent for NBC as well as host of The Daily Rundown on MSNBC. He is the author of The Stranger: Barack Obama in the White House and co-author of How Barack Obama Won: A State-by-State Guide to the Historic 2008 Presidential Election.

"When I first thought about attending GW, it was because I wanted to come to DC... I didn’t know a lot about GW specifically, just its location. So I applied or inquired about every school in the region that could allow me to double major in music and political science, which included GW. After a half day visiting GW, it wasn’t even a close call. GW was THE school I wanted to go to, as long as I could earn that music scholarship! Well, it all happened and there’s no doubt that the path of success that I’ve enjoyed in my professional life is due to one crucial decision I made in March 1990, saying yes to GW. The school delivered on every promise I heard at my first orientation, from access to professors with real world experience in government and politics to some amazing National Symphony performers who doubled as inspiring music teachers, GW delivered and then some. I look forward to continuing to return the favor to GW and pay it forward! This is an honor of a lifetime."

Chuck Todd is NBC News’ political director and the moderator of the #1 rated Sunday public affairs program, Meet the Press. Todd is a primary anchor for the network’s primetime political and election programming and spearheads NBC News’ political coverage across all its platforms and flagship news programs.

Todd was named moderator of Meet the Press in 2014 and the program has since become the #1 rated Sunday public affairs show for five straight years and won the 2019-2020 broadcast season across the board for the fourth season in a row.

In 2015, Todd took the success of the Sunday program to MSNBC with MTP Daily airing at 1 p.m. on weekdays.

As moderator, Todd has brought the longest-running show in television history into the modern age by expanding to streaming, digital and podcasting. The Chuck ToddCast, published each Wednesday, features interviews with top reporters from the nation’s capital and exclusive sit-down interviews.

Over the last five years, the annual Meet the Press Film Festival with the American Film Institute has showcased over 85 issue-based short documentary films from more than six countries, including over a dozen Oscar® and Emmy® nominations and the 2020 Oscar winner for Best Documentary Short Subject, Learning to Skateboard in a Warzone (If You’re A Girl).

During the 2020 presidential election cycle, Todd co-moderated two of the network’s presidential primary debates. The first in June 2019, hosted by NBC News, MSNBC and Telemundo, set records as the most-watched Democratic presidential debate in history with 18.1 million viewers and nine million live stream viewers. Then, in February 2020, the network broke records once again with the most-watched Democratic debate ever, averaging nearly 20 million total viewers and 13.5 million live stream viewers. In 2016, he also co-moderated a Democratic primary debate with MSNBC’s Rachel Maddow.

Prior to taking the helm of Meet the Press, Todd served as NBC News chief White House correspondent, traveling around the world with President Obama and reporting on the main pillars of his presidency, including the passage of the Affordable Care Act. From 2010 to 2014, Todd also hosted MSNBC’s The Daily Rundown, featuring daily interviews with top congressional members.

In 2009, Todd co-authored with Sheldon Gawiser the definitive election result analysis book for the 2008 presidential campaign, titled How Barack Obama Won. His second book, The Stranger: Barack Obama in the White House, was released in November 2014.

In 2007, Tim Russert, then-Washington bureau chief and Meet the Press moderator, recruited Todd to join NBC News as the network’s political director. Prior to joining NBC News, Todd worked at the National Journal’s “The Hotline” for 15 years, serving for six of those years as the editor-in-chief.

Todd is a native of Miami and currently resides in Arlington, Va. with his wife, Kristian, and two children.