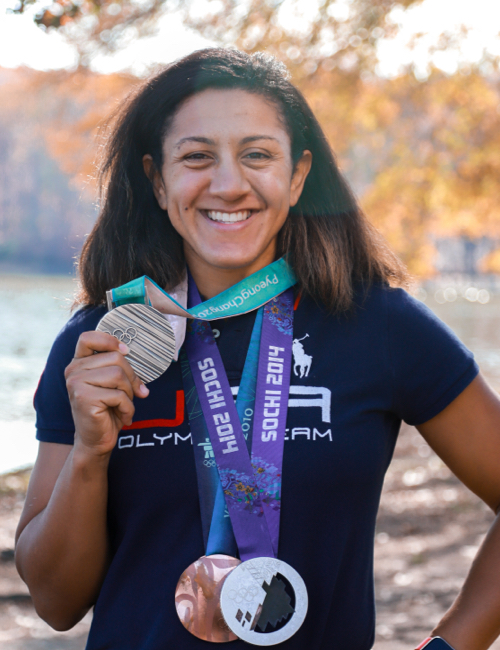 Monumental Achievement: At the age of nine, Elana Meyers Taylor stated her intention to become an Olympian. She achieved that goal, winning medals for bobsled in the 2010, 2014, 2018 Winter Olympics. She is also a four-time world champion, eight-time world championships medalist, and 2015 World Cup champion in bobsled. She made history in 2015 when she became the first woman to earn a spot on the U.S. National Team competing with the men as a four-man bobsled pilot. She went on to become the first woman to win a medal in international competition in a men’s event. Nearly one year after giving birth to her son, Nico, Meyers Taylor is competing for a spot on the U.S. bobsled team for the Olympic Winter Games Beijing 2022. An advocate for sports and equality for girls through her work with the Women’s Sports Foundation, Meyers Taylor’s many honors include being named her sport’s Athlete of the Year four times, receiving the Athletes' Choice Award twice, and being named Rookie of the Year in 2011.

"My experience at GW made me the person I am. It shaped and impacted me as an athlete but also as a person. I still have great friends from the university and I know that I received one of the best educations in the world. I grew as a person throughout my time at GW and can honestly say that GW made me who I am today."

Elana Meyers Taylor is a three-time Olympic medalist in the sport of bobsled, winning a bronze medal in 2010, and silver medals in 2014 and 2018. She is a three-time graduate from the George Washington University with a B.S. in exercise science, an M.T.A. in sports management, and a honorary doctorate in public service. Collegiately, she played on GW's softball team for five years and was inducted into the GW Athletic Hall of Fame, and has had her jersey retired, the first in the program. She also holds an M.B.A. in finance from the Keller Graduate School of DeVry. In 2019, she served as the president of the Women's Sports Foundation. She works with several non-profit organizations, including Classroom Champions, Right to Play, and Gigi's Playhouse. She volunteers with the Georgia Aquarium. She is married to fellow bobsledder Nicholas Taylor and is mother to son Nico Taylor.