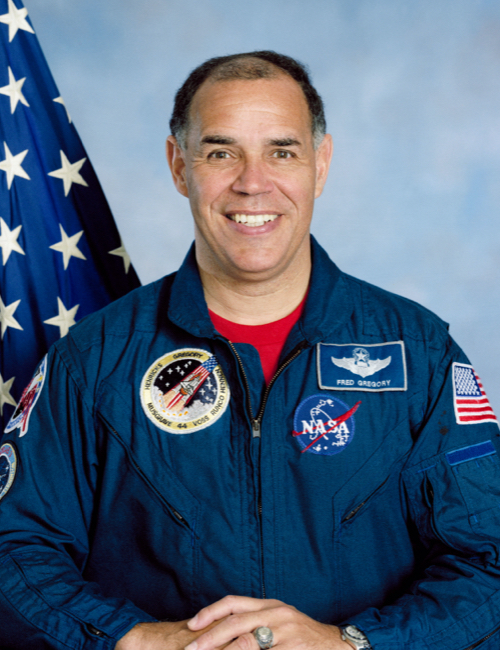 Monumental Achievement: Frederick D. Gregory was a pioneer, serving as the first African American deputy administrator at NASA. This followed his career as an astronaut during which he spent more than 455 hours in space, as pilot for the Orbiter Challenger and as a spacecraft commander aboard Discovery and Atlantis. He retired as a colonel in the United States Air Force in December 1993 after logging 7,000 hours in more than 50 types of aircraft, including 550 combat missions in Vietnam, and serving as a helicopter pilot and a fighter pilot. His honors include: the Defense Superior Service Medal; the Legion of Merit; the National Intelligence Medal of Achievement; two Distinguished Flying Crosses; 16 Air Medals; the NASA Distinguished Service Medal; two NASA Outstanding Leadership Medals; National Society of Black Engineers Distinguished National Scientist Award; President's Medal, Charles R. Drew University of Medicine and Science; Honorary Doctor of Science Degrees from the College of Aeronautics and the University of the District of Columbia. He was also awarded the Air Force Association Ira Eaker Award as well as numerous civic and community honors.

"All the engineering and math courses I completed in college depended on my skill, understanding and dexterity using a slide rule. Calculators were known but were something in the future only the extraordinarily rich would purchase and use for trivial tasks. Real engineers used slide rules!

Several years into my military career, now an engineering test pilot and loaned to NASA from the Air Force as a research test pilot, I became extremely interested in simulation. The young engineers—about six years younger than me—assigned to the NASA simulation labs talked about these new things call computers and they discussed them using words phrases like 'the future,' 'more powerful,' 'simple,' 'telecommunication', 'hardware,' 'firmware,' 'software,' 'memory,' 'IBM,' 'HP,' and something called 'memory.' I had no idea what those guys were talking about.

In the local Hampton, VA newspaper, I saw an advertisement for a college course simply called Computers 101 offered by the George Washington University and taught in the evening in the Hampton/Norfolk area. I thought this was the perfect course that I needed so that I would finally understand those young engineers. I called the phone number listed to enroll, learning that I just could not sign up for one course but needed to enter the GW graduate school to begin my master’s degree.

Two years later, I completed the M.S. requirements for information systems technology, could speak computer-ese, and began the next phase of my career. Thank you, GW!"

Frederick Drew Gregory is a former NASA astronaut and former NASA deputy administrator. He also served briefly as NASA acting administrator in early 2005, covering the period between the departure of Sean O'Keefe and the swearing in of Michael Griffin. As acting administrator, Gregory led the NASA team and managed its resources as NASA sought to advance the U.S. vision for space exploration. In 2002, Gregory was nominated by President George W. Bush and confirmed by the United States Senate as deputy administrator. In that capacity, he served as the chief operating officer for the agency. He was responsible for directing and managing many of the programs as well as the day-to-day operations and activities at NASA. Prior to becoming the deputy administrator, Gregory served as the associate administrator for Space Flight from December 2001 to August 2002. From June 1992 to December 2001, he held the position of associate administrator, office of safety and mission assurance. He retired from NASA in December 2005 and has worked as an independent consultant for L-3, Deloitte, NASA, Delaware North Parks and Resorts, Dynamic Research Corporation, NRC, and others. He has also served as a board member or trustee in many capacities for the Maryland Science Center, the Air Force Academy Association of Graduates, the Air Force Academy Endowment, the National Museum of the United States Air Force, the National Aviation Hall of Fame, and others

Gregory has extensive experience as an astronaut, test pilot, and manager of flight safety programs and launch support operations. He was selected as an astronaut in January 1978 and logged 455 hours in space: as pilot for the Orbiter Challenger (STS-51B) in 1985; as spacecraft commander aboard Discovery (STS-33) in 1989; and as spacecraft commander aboard Atlantis (STS-44) in 1991.

He retired as a colonel in the United States Air Force in December 1993 after logging 7,000 hours in more than 50 types of aircraft, including 550 combat missions in Vietnam. His 30-year Air Force career included serving as a helicopter pilot and as a fighter pilot. He graduated from the United States Naval Test Pilot School and served as an engineering test pilot for the Air Force and for NASA.