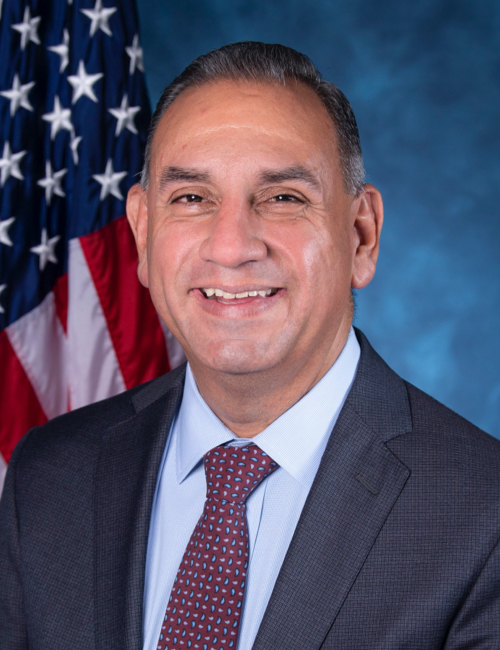 Monumental Achievement: Gilbert Cisneros is transforming the lives of Hispanic families throughout the U.S. Before Cisneros and his wife, Jacki, launched a foundation to improve the level of Hispanic education in the country, they endowed scholarships for Hispanic students at their respective alma maters. Cisneros partnered with the Hispanic Scholarship Fund and the city of Pico Rivera, California to create Generation First Degree Pico Rivera, with the goal of putting a college degree in every Hispanic household in the city. Cisneros served a term in Congress, representing California’s 39th congressional district from 2019 to 2021.

"Making the decision to attend GW was life changing for me. It was the first time I had been away from home, and away from my family. GW was where I had to learn to grow up and become an adult, and to take care of myself. It is where I learned to become responsible, but, more importantly, it is where I got a great education, that prepared me for my future and it is where I made life-long friendships that are still important to me today."

A former military officer and member of Congress, Gilbert Cisneros is a leading philanthropist and advocate for veterans. Born, raised, and still living in southern California, he was elected as the U.S. Representative for California's 39th congressional district and served from 2019 to 2021.

After enlisting in the United States Navy in 1989 upon graduating from high school, Cisneros was selected for the Broadened Opportunity for Officer Selection and Training Program and commissioned as an officer in 1994. He left the Navy after 10 years of service and worked for Frito-Lay. In 2010, he and his wife started The Gilbert & Jacki Cisneros Foundation, focused on helping students find a path to higher education through scholarships and college access programs. Along with supporting education initiatives, the Cisneros have supported organizations to end sexual harassment and assault on college campuses. They also support the USO which supports active duty troops.

Cisneros founded The Cisneros Hispanic Leadership Institute at his alma mater, the George Washington University, which not only provides scholarships for Latino students, but is also becoming a leading institute for policy issues that affect the Latino community. Prior to serving in Congress, Cisneros was a member of the President’s Advisory Council for the Arts and a member of the Democratic National Committee finance committee.

As a member of Congress representing California’s 39th District, Cisneros worked on behalf of service members and veterans and was a member of the House Armed Services Committee and the House Committee on Veterans’ Affairs. He has championed greater diversity in the military officer corps and addressed the issue of mental health and suicide among both veterans and active service members. After the death of Spc. Venessa Guillén, Cisneros participated in discussions about the status of Latinos in the Army and helped to introduce the I Am Vanessa Guillén Act to make sexual harassment a crime within the Uniform Code of Military Justice.

He has advocated for military families on issues of housing, child abuse, and exceptional family members and has been outspoken about the military taking a bigger role in protecting the planet. His activism secured language in the National Defense Authorization Act (NDAA) so that the military would begin to convert all non-tactical vehicles to no-emission vehicles. In addition, he secured language in the NDAA to evaluate and strengthen the Navy’s process to not only make better warriors, but better ship drivers. He is the co-founder of the Military Transition Assistance Pathway Caucus to support and advocate on behalf of military service members returning to civilian life.

Cisneros attended college on a Naval Reserve Officer Training Corps scholarship and received a B.A. in political science from the George Washington University. While in the Navy, he received an M.B.A. from Regis University. At the age of 43, after starting his education foundation, he went back to school using his G.I. Bill benefits and received an A.M. in urban education policy from Brown University.

Cisneros has received numerous awards for his military service, philanthropic work, and service in Congress. Most recently, he received an award from the United States Navy Memorial for his years of service to the United States. He has also been recognized by the U.S. Chamber of Commerce with its Abraham Lincoln Award for his bipartisan work in the House of Representatives on behalf of small businesses.