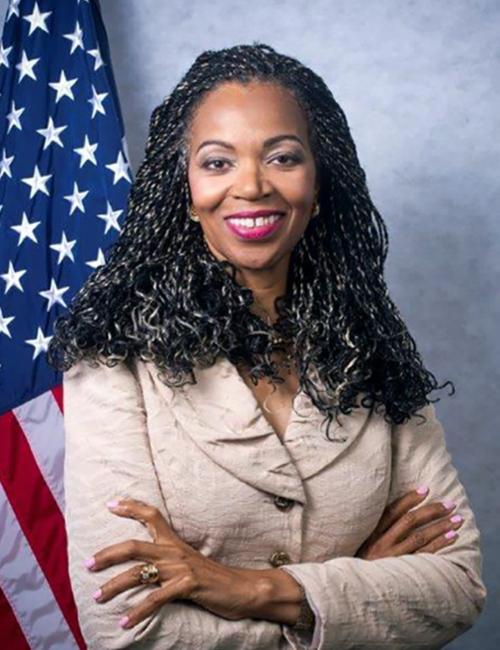 Monumental Achievement: Gina Abercrombie-Winstanley’s sterling 30-year career in the U.S. foreign service included four years as U.S. ambassador to the Republic of Malta. Internationally known for election monitoring in the Gaza Strip and equality efforts in Saudi Arabia, she has advised the commander of U.S. cyber forces on foreign policy priorities, expanded counterterrorism partners and programs as deputy coordinator for counterterrorism, and coordinated the largest evacuation of American citizens from a war zone since World War II. On April 12, 2021, she became the U.S. State Department’s first chief diversity and inclusion officer.

Ambassador Gina Abercrombie-Winstanley, a 30-year diplomat, was the longest serving U.S. ambassador to the Republic of Malta. Through a series of senior positions that included advising the commander of U.S. cyber forces on U.S. foreign policy priorities, expanding the country's counterterrorism partners and programs as deputy coordinator for counterterrorism, and coordinating the largest evacuation of American citizens from a war zone since WW ll, her professional life has played out almost daily in international media.

She began her formal work in teaching and leadership development as chairwoman for Middle East area studies at the prestigious Foreign Service Institute where U.S. diplomats are trained. Earlier in her career, she served in Baghdad, Jakarta and Cairo before taking on the position of special assistant to the secretary of state for the Middle East and Africa. Her Middle East assignments include election monitoring in the Gaza Strip and, an extraordinary assignment where she actively supported gender equality in the Kingdom of Saudi Arabia as the first woman to lead a diplomatic mission there. In addition to serving at the State Department, she has held senior positions at the Defense Department and at the National Security Council of the White House. Prior to that, she was a fellow on the Senate Foreign Relations Committee for the then ranking member, Senator Joseph Biden. Ms. Abercrombie-Winstanley is the recipient of the Maltese Order of Merit, Department of State Meritorious and Superior Honor Awards, including "For acts of courage during an attack on the U.S. Consulate General, Jeddah, Saudi Arabia on December 6, 2004 by al-Qa'ida terrorists."

Over the years, Ms. Abercrombie-Winstanley has been a keynote speaker for a variety of organizations including IESAbroad, The Cleveland City Club, TrueBlue Inclusion; Harvard University, The University of Denver, The University of Malta and Johns Hopkins University. She is an in-demand panelist and moderator at some of the most respected international think tanks including The German Marshall Fund, CSIS, The Brookings Institution, The World Affairs Council and The Council on Foreign Relations, on issues ranging from U.S. Middle-East policy, how diversity and inclusion improve U.S. foreign policy making, cyber security challenges and counterterrorism. She is a strong proponent of excellence through inclusion across organizations and strives to break down barriers to the full participation of women and minorities. She was ambassador-in-residence at Oberlin College for 2020, and served as the co-chair of the diversity in national security working group for the Biden-Harris campaign.

Ms. Abercrombie-Winstanley, a Cleveland native, has degrees from the George Washington University and The Johns Hopkins University and is a member of the Council on Foreign Relations. She has been an active board member for several organizations committed to excellence in educating and leadership development including the Forum for Education Abroad, College Now Greater Cleveland, and the International Career Advancement Association. She also serves on the boards of the Cleveland Museum of Contemporary Art and the Middle East Policy Council. She sings with the Washington Performing Arts Society and has been published in The New York Times opinion section and The Foreign Service Journal. She is the co-author of two papers published in The New York Review of Science Fiction on "Diplomacy in Star Trek" and "The Representation of Disability in Star Trek." In 2019, she was voted into the American Academy of Diplomacy.