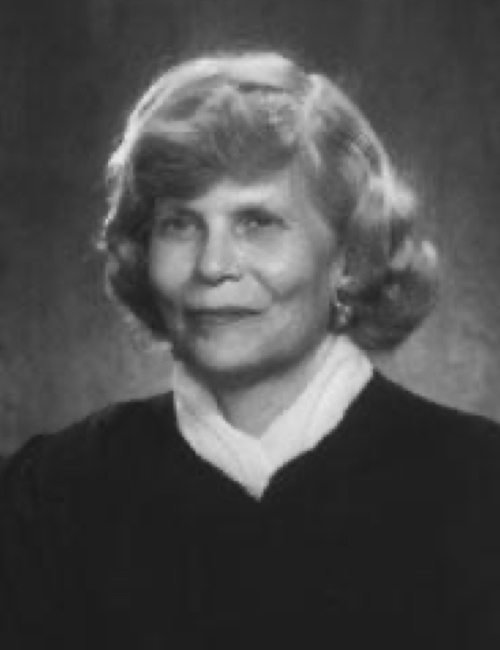 Judge, United States District Court for the District of Columbia

Monumental Achievement: Joyce Green is a pioneer for women in the law. She spent 17 years in private practice before joining the judicial bench in 1968, serving 11 years on the D.C. Superior Court and 20 years as a federal judge at the U.S. District Court for the District of Columbia and the U.S. Foreign Intelligence Surveillance Court. During her tenure as a federal judge, she presided over many significant cases including the sprawling BCCI bank fraud case and the Guantanamo Bay Detainee cases. She has received numerous awards and recognition in the profession and in 1979, Green was named "Woman Lawyer of the Year" by the Women’s Bar Association of the District of Columbia. Since then, she has received the Intelligence Under Law Award from the National Security Agency, the Edmund J. Randolph Award from the U.S. Department of Justice, and the Agency Seal Medallion from the Central Intelligence Agency.

"I have so many very fond memories of my time at GW Law and continue to watch the tremendous growth of this terrific institution. I did not start my legal studies at GW but enrolled as a 'special student' to attend summer sessions because of my interest in the law and the varied course offerings. Dean Colclough changed my plans and devised a schedule that would allow me to graduate in two years rather than three. There were six women total in the day and evening programs. We quickly found one another, studying, bonding (tightly), and sharing experiences. I had a professor who called on me everyday to recite/analyze (the dreaded Socratic method). He did not call on any male students. My male classmates however were completely accepting and reflected no difference or distinction, certainly no discrimination. I had a really great time in law school and am so very proud of the confidence that I gained to meet life’s challenges, with law school also providing a strong foundation for my legal career. Oh, how the times today have changed. Bravo GW!"

Throughout her career, Joyce Hens Green blazed a trail for women in the law. In 1949, she received a bachelor of arts from University of Maryland, followed by a J.D. in 1951 from the George Washington University Law School, from which she also earned a doctor of laws (LL.D.) in 1994.

She spent 17 years in private practice in Washington, D.C., and Arlington, Virginia, becoming a partner at the firm Green & Green, before serving as a judge on the Superior Court of the District of Columbia from 1968 to 1979. In March 1979, President Jimmy Carter nominated Green to a seat on U.S. District Court for the District of Columbia to which she was confirmed by the Senate in May of that year. During her tenure as a federal judge, she presided over the sprawling BCCI bank fraud case and ruled that the bank had engaged in money laundering and other financial crimes and had illegally gained the controlling interest in a major American bank. In the Guantanamo detainee cases, Judge Green ruled that the detainees had the right to habeas corpus and due process to challenge their detention at Guantanamo Bay, a decision that was affirmed in a landmark ruling by the Supreme Court (Boumediene v. Bush, 553 US 723 (2008)).

In 1979, Green was named "Woman Lawyer of the Year" by the Women’s Bar Association of the District of Columbia, and since then has received an honorary doctor of laws from George Washington University, the Intelligence Under Law Award from the National Security Agency, the Edmund J. Randolph Award from the U.S. Department of Justice, the Agency Seal Medallion from both the Central Intelligence Agency and National Security Agency, and the National Security Award from the Federal Bureau of Investigation. In addition, Green has been recognized as the Judicial Honoree of the Year by the Bar Association of the District of Columbia and received both the Distinguished Alumna Award and University Alumni Achievement Award from the George Washington University as well as the Women's Legal Defense Fund Award for Outstanding Contribution to Equal Rights.