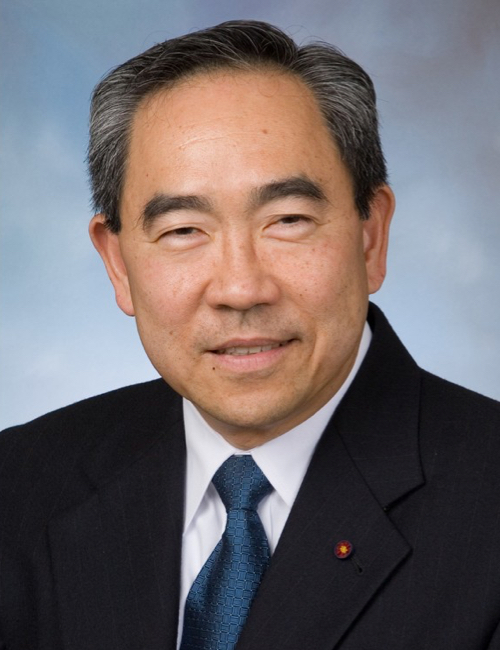 Monumental Achievement: Kenneth Moritsugu combined his passion for caring for others and his commitment to public service throughout his 37-year career in the United States Public Health Service (USPHS). A board certified physician in preventive medicine, Moritsugu was the first Asian American surgeon general of the United States. He has also been a leading advocate for the physician assistant profession. Moritsugu has received numerous honors and awards, including the Surgeon General's Medallion with two gold stars, 12 honorary degrees, and distinguished service medals from the USPHS, the Federal Bureau of Prisons, and the Uniformed Services University of the Health Sciences.

"I think back to the beginning of my medical and professional career with George Washington University as being the springboard for my lifelong commitment to serving people in communities. The daily walk between Madison Hall on 22nd and H Sts., NW, and the medical school at 14th and H, provided me a ground-level view of the many health needs of the diverse population of Washington, D.C. The varied experiences of caring for patients at D.C. General Hospital, the VA Hospital, Children’s Hospital, Fairfax Hospital, and Columbia Hospital for Women, augmented by the knowledge, skills, and experiences of the dedicated academic and community physician preceptors, added to my appreciation of medicine for individuals and for communities, and the differences we physicians could bring to society in helping and healing. Thank you, George Washington, for providing me a solid basis for my entire career."

Dr. Kenneth Moritsugu is the president and chief executive officer of First Samurai Consulting, LLC, a firm specializing in health consulting focused on public health systems and policies, “putting the patient at the center of everything we do.”

Most recently, Dr. Moritsugu served as the interim chief science and medical officer of the American Diabetes Association (ADA) from August 2019 through June 2020. In that role, he was responsible for the generation of the annual standards of medical care in diabetes, as well as the production and conduct of the 80th annual scientific session of the ADA, the first-ever virtual production of this global meeting. During his tenure, the ADA provided guidance regarding COVID-19 and its impact on people with diabetes, underwent an internal realignment of its science and medicine activities, and refocused its mission.

Moritsugu was born and raised in Honolulu, Hawaii. After attending Chaminade College for two years, he received his baccalaureate degree with Honors in classical languages from the University of Hawaii in 1967, a medical doctor degree from the George Washington University School of Medicine in 1971, and a master of public health in health administration and planning from the University of California, Berkeley, in 1975. He is a member of Omicron Delta Kappa, and Delta Omega honorary societies.

He is an adjunct professor of global health at the George Washington University School of Public Health, and adjunct associate professor of preventive medicine at the Uniformed Services University of the Health Sciences.

The recipient of numerous awards and recognitions from national and international organizations, Moritsugu has been granted twelve honorary degrees, and holds the surgeon general’s medallion with two gold stars, as well as the distinguished service medals from the U.S. Public Health Service, the U.S. Department of Justice Federal Bureau of Prisons, and the Uniformed Services University of the Health Sciences. He serves on the boards of 10 non-profit organizations and three academic institutions, including as chair of the dean's advisory council for the Milken Institute School of Public Health.

He has been named an honorary lifetime member of the American Academy of Physician Assistants, and the first and only honorary fellow of the Association of Diabetes Care and Education Specialists.