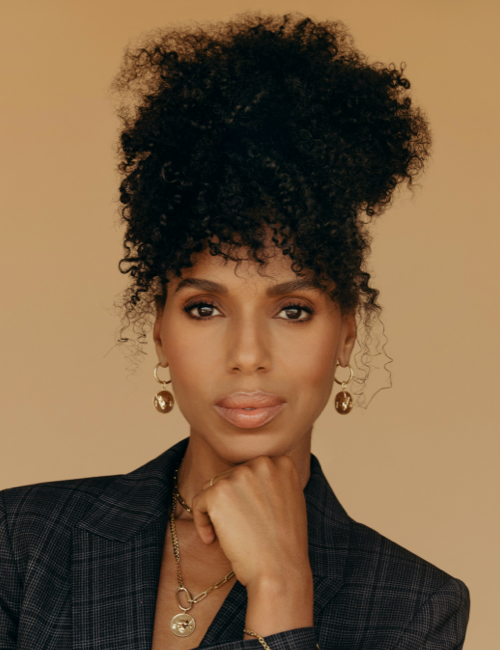 Monumental Achievement: Actor, producer, director, and activist Kerry Washington is a force to be reckoned with on both sides of the camera. She gained wide public recognition for starring as Olivia Pope on the television series, Scandal, breaking barriers by becoming the first Black woman to headline a network TV show since 1974. Washington has been nominated for eight Primetime Emmy Awards, winning one for her work as an executive producer. Washington is also an activist who has served on the President’s Committee of the Arts and Humanities, as co-chair of Michelle Obama’s initiative When We All Vote, and also as co-chair of the Black Voices for Black Justice Fund, an organization dedicated to funding and amplifying the voices of Black leaders who are helping build a more equitable America. Among her many awards are five NAACP Image Awards, including the President’s Award which recognizes special achievement in furthering the cause of civil rights and public service. Time magazine included Washington in its Time 100 list of most influential people in 2014.

Emmy-winning, SAG, and Golden Globe-nominated actor, director, producer, and activist Kerry Washington is a versatile and fearless multi-hyphenate who has received high acclaim for her work in film, television, and theater.

Washington received widespread public recognition for her role as Olivia Pope on the hit ABC drama Scandal, breaking barriers by becoming the first African American woman since 1974 to headline a network TV drama. Over the course of seven seasons, Washington earned two Primetime Emmy nominations, a Golden Globe nomination, a SAG nomination, and two NAACP Image Awards for her leading role on the Peabody Award-winning series. With steamy on-air chemistry and a flair for fashion, Washington turned Olivia Pope into an iconic character.

Washington’s performances over the years have received many accolades, including nominations for the Independent Spirit Awards, People’s Choice Awards, MTV Movie Awards, and wins for the BET Awards and Teen Choice Awards. Washington’s film credits include: The Prom, Cars 3, Django Unchained, Ray, The Last King of Scotland, Save the Last Dance, Lift, For Colored Girls, Night Catches Us, Peeples, The Details, Mother and Child, Life is Hot in Cracktown, Lakeview Terrace, Miracle at St. Anna, Fantastic Four: Rise of the Silver, I Think I Love My Wife, The Dead Girl, Fantastic Four, Mr. & Mrs. Smith, and Our Song.

In 2016, Washington launched her production company, Simpson Street, which uses art, entertainment and technology to share narratives that amplify our common humanity while affirming the value of every individual’s unique journey. Simpson Street’s first project, HBO’s Confirmation, earned Emmy, Golden Globe, NAACP Image Award and Screen Actors Guild Awards nominations. Simpson Street launched the series Five Points on Facebook Watch in 2017, which debuted its second season on the platform in August 2019. The company executive produced ABC special Live in Front of a Studio Audience in fall 2019, which featured re-imaginings of the classic sitcoms All in the Family and Good Times. The special received four Emmy nominations and took home the trophy for Outstanding Variety Special (Live). Simpson Street brought its latest film, The Fight—a documentary which follows five ACLU lawyers as they battle the Trump administration’s attack on human rights and civil liberties—to Sundance in January 2020 where Magnolia Pictures picked up the distribution rights. The film was released on VOD and in theaters in July 2020. Other projects in development include action-drama Shadow Force, which Washington is starring in and producing in partnership with Sterling K. Brown and Danielle Reardon’s Indian Meadows Productions and Made with Love Media’s Stephen “Dr” Love, and the ensemble drama Number One Chinese Restaurant, based on Lillian Li’s novel of the same name, in development at Hulu, written by Jessica Yu and Lillian Li.

Washington and Simpson Street’s latest release is Little Fires Everywhere for Hulu alongside Reese Witherspoon and her Hello Sunshine productions. The series began streaming on the platform in March 2020 and launched internationally on Amazon Prime in May of that year. Washington received Emmy, SAG, and NAACP Image Award nominations for her portrayal of Mia Warren. Little Fires Everywhere also received multiple NAACP Image Award and Emmy nominations, including Outstanding Limited Series. Washington will soon begin production on Netflix’s The School For Good And Evil, starring in the film adaptation of the fantasy YA novel opposite Charlize Theron.

In 2009, Washington made her Broadway debut in David Mamet’s Race, alongside James Spader and David Alan Grier. Washington returned to the stage in 2018 in Christopher Demos-Brown’s American Son opposite Steven Pasquale, Jeremy Jordan, and Eugene Lee. Washington received a Drama League Award nomination and vast critical acclaim for her performance in the limited Broadway run. In January 2019, Washington announced that Simpson Street would be partnering with Netflix to adapt American Son for the screen. The production premiered at the Toronto Film Festival and was released as a Netflix television event. The film received an Emmy nomination for Outstanding Television Movie. Washington also received a PGA nomination for Outstanding Producer of Televised or Streamed Motion Pictures, in support of American Son, as well as three NAACP nominations for Outstanding Actress in a Television Movie, Limited-Series or Dramatic Special; Outstanding Television Movie, Limited-Series or Dramatic Special; and Outstanding Directing in a Motion Picture (Television). In addition to acting and producing, Washington is also directing. Her most recent directing credits include SMILF, Scandal, and Insecure.

Washington is a lifelong advocate and activist. She is dedicated to using her voice to support a healthy and fully participatory democracy by ensuring that all eligible Americans—particularly those who have been historically underrepresented—are engaged and empowered to affect change in their communities. Washington has been involved with many social and political causes, including her service on President Obama’s Committee on the Arts and Humanities. In 2013, Washington was honored with the NAACP President’s Award, recognizing her special achievements in furthering the cause of civil rights and public service. In 2014, Time magazine included Washington on its annual Time 100 list of the Most Influential People in the World. She received the GLAAD Media Vanguard Award in 2015 and the ACLU Bill of Rights Award in 2016. She was a co-chair of Mrs. Obama's When We All Vote campaign and is the founder of Influence Change (IC21), a strategic initiative that partners with high impact, non profit organizations to increase voter turnout. She is also a co-chair of the Black Voices for Black Justice Fund, an organization dedicated to funding and amplifying the voices of Black leaders who are helping build a more equitable America.

Washington is on the governing board and global leadership board of TimesUp to help fight for a future where no one is harassed, assaulted, or discriminated against at work. She is an Angel for Baby2Baby, an organization supporting children living in poverty with diapers, clothing and all the basic necessities that every child deserves. She is also a former board member to VDay, a global activist movement to end violence against all women (cisgender, transgender, and those who hold fluid identities that are subject to gender-based violence), girls, and the planet.

Since 2013, Washington has served as both a brand ambassador and creative consultant for Neutrogena. In 2020, she was as a strategic consultant and investor in Byte, a cutting edge direct-to-consumer tele-dentistry company (1B exit in Dec 2020). Also in 2020, she became a creative partner to AuRate, a direct-to-consumer luxury jewelry brand. In November 2020, she launched the first jewelry collection in partnership with AuRate. For 2021, Kerry has joined OPI as a brand ambassador in celebrating their 40th anniversary.