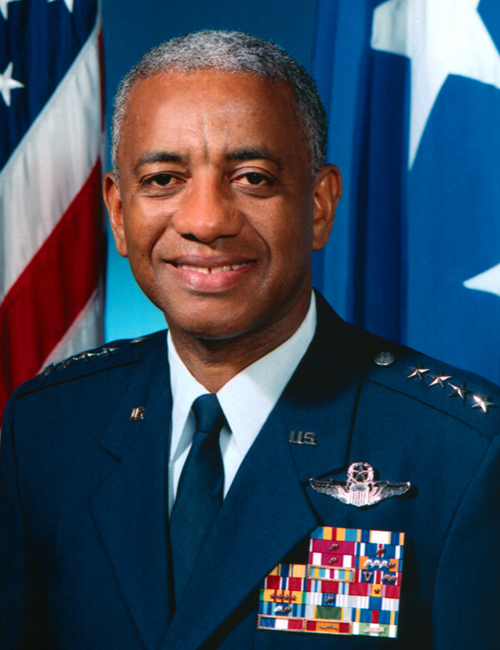 Monumental Achievement: During his more than 30-year service in the United States Air Force, four-star General Lloyd “Fig” Newton flew 269 combat missions in Vietnam, served as a congressional liaison to the U.S. House of Representatives for the Air Force, and led the Air Education and Training Command, which consisted of 13 bases, 43,000 active duty personnel and 14,000 civilians. He was also the first African American pilot in the U.S. Air Force Thunderbirds air demonstration squadron. Newton has received numerous awards and honors including the Wright Brothers Memorial Trophy for his extraordinary achievements as a history-making military aviator and his continuing contributions to the advancement of aviation education and advocacy.

When General Lloyd “Fig” Newton retired in 2000 from the United States Air Force as a four-star general, he had served the nation for more than three decades. Newton was a command pilot with more than 4,000 flying hours in seven different aircraft. He flew 269 combat missions from Da Nang Air Base, South Vietnam, including 79 missions over North Vietnam.

Newton was selected to join the U.S. Air Force Aerial Demonstration Squadron, the Thunderbirds, in 1974—the first African American to be chosen for this elite group. From 1978 to 1982, Newton served as an Air Force congressional liaison officer with the U.S. House of Representatives in Washington, D.C. He has commanded three wings, an air division and held numerous senior staff positions. He served as the director of operations, United States Special Operations Command and as the assistant vice chief of staff headquarters U.S. Air Force. Newton culminated his Air Force career as the commander, air education and training command where he was responsible for recruiting, training and education for all Air Force personnel. His command consisted of 13 bases, 43,000 active duty personnel and 14,000 civilians.

After leaving the Air Force, Newton worked at Pratt & Whitney as executive vice president of international military programs and business development until 2006. In 2018, Newton was honored as the recipient of the Wright Brothers Memorial Trophy for his extraordinary achievements as a history-making military aviator and his continuing contributions to the advancement of aviation education and advocacy. Newton serves on the board of L3 Harris Technologies, Inc. and formerly served as chair of the National Business Aviation Association board of directors.

Newton earned a bachelor of science degree in aviation education and was commissioned a second lieutenant from Tennessee State University in 1966. In 1985, he received a master of arts degree in public administration from the George Washington University. He has been awarded an honorary doctorate in aeronautical science from Embry-Riddle Aeronautical University and an honorary doctor of science degree from Benedict College.