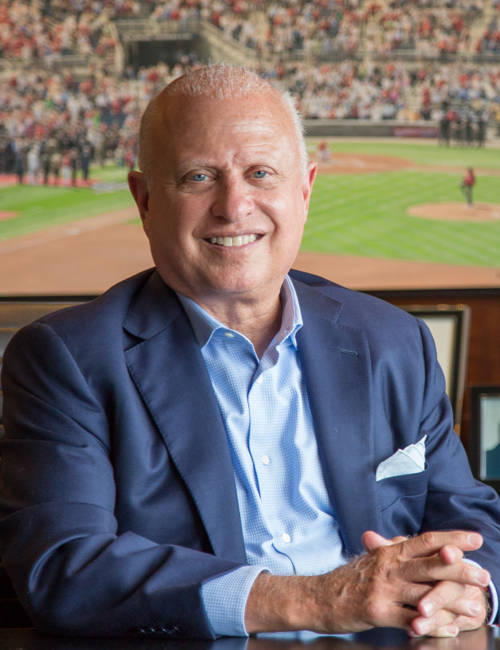 Monumental Achievement: Combining a passion for community and business acumen, Mark Lerner serves as the managing principal owner and vice chairman of Major League Baseball’s Washington Nationals and a principal of family-owned Lerner Enterprises, a real estate development, management and investment company focused on the Washington, D.C., metropolitan area. Under Lerner’s leadership, the Nationals won the 2019 World Series championship. He and his family are leading philanthropists in the region, supporting numerous organizations and causes. He currently serves as a trustee of the Jewish Community Center of Greater Washington and as a member of the board of The George Washington University Hillel.

Mark D. Lerner is a native Washingtonian and managing principal owner and vice chairman of the 2019 World Series champion Washington Nationals. He is also a principal of Lerner Enterprises, one of the largest private real estate developers in the Washington, D.C. area. The company was founded in 1952 by his father, Theodore N. Lerner, and is involved in all phases of real estate including planning, development, construction, leasing, asset and property management. The Lerner organization has developed millions of square feet of office buildings, retail centers, hotels and residential communities in the Washington, D.C., Maryland and Virginia area. The principals of the company include his father Ted, and his brothers-in-law, Edward L. Cohen and Robert K. Tanenbaum. He received his B.B.A. from the George Washington University in 1975.

An enthusiastic sports fan since childhood, Lerner also represents the Lerner, Cohen and Tanenbaum families as a partner in Monumental Sports & Entertainment – the sports investment group that owns the 2018 NHL Stanley Cup champion Washington Capitals, the NBA Washington Wizards, the 2019 WNBA champion Washington Mystics, and the Capital One Arena. Lerner holds numerous volunteer positions within the community. He is currently on the council of advisors of the Jewish Community Center of Greater Washington, a member of the board of directors of the George Washington University Hillel, a member of the advisory board of Israel Bonds, a member of the board of the Washington D.C. Sports Hall of Fame, vice president of The Annette M. and Theodore N. Lerner Family Foundation, and an officer of Washington Nationals Philanthropies. In 2007, he received the prestigious Chadesh Yameinu Award from the Charles E. Smith Jewish Day School in Rockville, Maryland, where he previously served as a member of the board of directors and as chair of the building & grounds committee. He was also co-chair of the 2004 JCC Maccabi Games of Greater Washington. In 2015, he was awarded Trendsetter of the Year in commercial real estate by Transwestern and Delta Associates. In 2018, the Lerner family was awarded the Irene and Abe Pollin Humanitarian Award by the Jewish Community Center of Greater Washington. In December 2020, the Washington Business Hall of Fame and Junior Achievement of Greater Washington named Lerner a laureate inductee. This award celebrated his professional and philanthropic contributions to the quality of life in Greater Washington through the private sector economy. In addition, he sits on Major League Baseball’s competition and audit committees.

Adding to this history of community involvement in the Washington area, the Lerner family has expanded its participation in the region through Nationals Philanthropies. This includes major projects such as the state-of-the-art Washington Nationals Youth Baseball Academy in Ward 7 and the Nationals Diabetes Care Complex at Children’s National Medical Center. In addition, The Lerner Family Foundation and Nationals Philanthropies helped to create the Nationals Miracle Field in Germantown, Maryland, to encourage disabled children to play baseball. The team also hosts player trips to visit active military and veterans at Walter Reed National Military Medical Center, and hosts and honors returning veterans at each of their home games.

Lerner resides in Washington with his wife of 42 years, Judy Lenkin Lerner. They have three married children and two grandchildren.