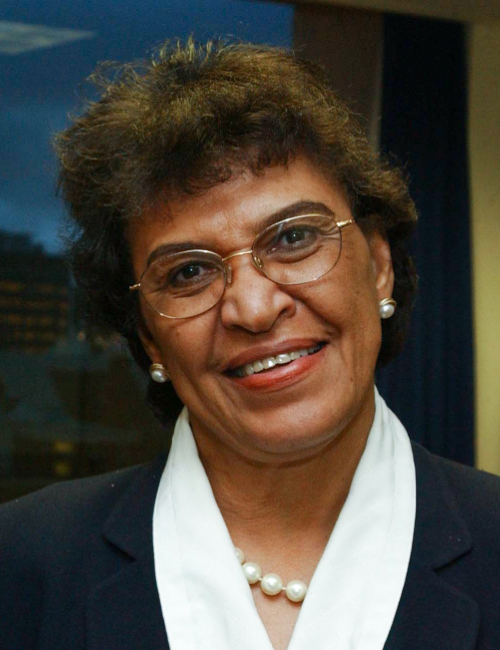 Monumental Achievement: An influential figure in American education, former dean of the George Washington University Graduate School of Education and Human Development and founding president of Education International, Mary Futrell spent her 60-year career working indefatigably on behalf of educators and students. She attended and began her teaching career in segregated schools and worked to help integrate schools as a teacher. The fourth person of color to become president of the National Education Association, she was a fierce advocate for civil and human rights, particularly women’s rights, during her two terms in office. She has received numerous honors and awards for her work in teaching and education policy and reform including more than 20 honorary degrees. In 1983, People magazine called her “one of the most powerful Black women in America.”

"When I earned my master's and doctoral degrees from GW, I really appreciated the high standards and personal faculty support. GW did a great job of preparing me for the future and for many of the challenges I faced in my professional career, not only as it relates to teaching, but also as it relates to my work with professional organizations in the United States and abroad. In addition to working with education nationally, I did a lot of work with UNESCO and United Nations, and with different organizations such as the Kettering Foundation and the Carnegie Foundation for the Advancement of Teaching Leadership. Learning from those experiences helped prepare me to better prepare students for the challenges they would meet in their personal lives as well as their professional lives.

I am honored and humbled to receive this award, and I really appreciate that I was selected to receive it. This is a very significant honor to me."

Growing up in Lynchburg, Mary Alice Franklin Hatwood Futrell attended segregated public schools before earning a degree in business education at Virginia State College (now Virginia State University) in 1962. She soon began teaching at an Alexandria high school and joined a group of teachers working for the successful desegregation of the city’s schools. Active in the Virginia Education Association, Futrell served two terms as its president, from 1976 to 1978. In 1983, she was elected to the first of an unprecedented two terms as president of the National Education Association. During her six-year tenure, she stressed the importance of professional development for teachers to ensure high-quality public education for every child.

Futrell earned a doctorate in education in 1992 and joined the faculty of the George Washington University, where she served as dean of the Graduate School of Education and Human Development from 1995 to 2010. Committed to strengthening public schools and establishing high standards for teachers and students, she is a faculty member of GW’s Education Policy Studies Program and is co-director of the Center for Curriculum, Standards, and Technology. In 1993, she was the founding president of Education International, which promotes quality education and human rights worldwide.

In 2004, Futrell received UNESCO’s Jan Amos Comenius Medal for her continuing efforts to ensure that children around the world have access to education. Since 2005, Education International has granted an annual award named for Futrell that honors educators whose efforts have significantly influenced education and equal opportunities, especially for girls and women.