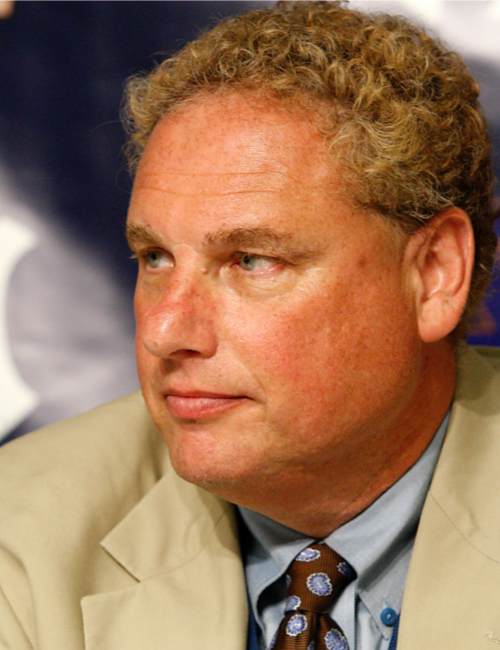 Monumental Achievement: Randy Levine’s heart and soul thrive in New York where he has served as president of Major League Baseball’s New York Yankees since 2000. During his tenure, the team has won two World Series championships, built the new Yankee Stadium, founded the YES Network and created Legends Hospitality LLC.

His earlier career reflects his interests in both government and baseball, having served as: principal associate deputy attorney general and principal deputy associate attorney general at the U.S. Department of Justice during the Reagan administration; New York City's labor commissioner and deputy mayor for economic development, planning and administration during Mayor Rudy Giuliani's administration; and chief labor negotiator for Major League Baseball. He has also been in private practice in the law and serves of counsel with a national labor and employment law firm.

Levine has won eight Emmy Awards and serves as chairperson of YES Network.

"The thing I appreciated the most about GW was the broad range of students from all over the
world. That expanded my mind and taught me to be more patient and understanding."

Randy Levine begins his 22nd season as president of the New York Yankees in 2021. He was named to his position in January 2000, becoming the first person to hold the post with the club since 1986.

Under his supervision and guidance, the Yankees constructed the new state-of-the-art Yankee Stadium, completing the facility on time for the beginning of the 2009 season, which culminated in the franchise’s 27th world championship. The Yankees topped the American League in average home attendance in 16 of the last 17 seasons with fans in attendance from 2003-2019.

Levine was a principal founder of the YES Network, which is the most-watched regional sports network in the United States. He was also the lead negotiator in the sale of 80 percent of the network to 21st Century Fox and in 2019 led the negotiation to buy the YES Network from the Disney Company along with partners Amazon, Sinclair Broadcasting, Blackstone, Mubadala and Red Bird Capital. In 2020, Levine was named as chairman of the YES Network. In 2008, Levine was instrumental in creating Legends Hospitality, LLC, with the Dallas Cowboys, which currently operates at the Yankees’ and Cowboys’ stadiums, as well as many other world famous venues, including One World Observatory. In January 2021, he was a leader in the sale of Legends’ majority stake to the private equity group Sixth Street Partners. In 2004, Levine helped organize Yankees-Steiner, a leading sports memorabilia company.

Levine has also spearheaded the Yankees’ international brand expansion, including a transformational partnership in 2013 with Manchester City Football Club to acquire Major League Soccer’s 20th expansion team. New York City Football Club (NYCFC) began play in 2015 at Yankee Stadium and has drawn more than two million fans in home attendance through its first five seasons. In 2010, he led a Yankees delegation that visited Tokyo, Beijing and Hong Kong with the 2009 World Series Trophy, marking the first time that the Yankees brought one of their World Series trophies to Asia. In addition, Levine helped develop the joint venture agreement in Japan between the Yankees and Yomiuri Shimbun, which is the parent company of the Yomiuri Giants.

In 2007 alone, the Yankees: became the first Major League organization to sign players from the Israel Baseball League; embarked on their first-ever large-scale outreach into Taiwan by holding a clinic for high school players and coaches in Taipei; and established a first-of-its-kind working relationship with the Chinese Baseball Association. Levine is also the Yankees’ principal liaison to Major League Baseball and contributes to player negotiations and contract issues.

He has been at the forefront of bringing a diverse array of entertainment and special events to Yankee Stadium, transforming the venue into a year-round destination for a variety of college football, soccer, hockey, music, boxing and corporate events. Highlights have included the January 2014 Coors Light NHL Stadium Series featuring the New York Rangers, New York Islanders and New Jersey Devils; international soccer matches showcasing the likes of Manchester City, Liverpool, Real Madrid, AC Milan, Paris Saint-Germain and Chelsea; concerts by Paul McCartney, Madonna, Garth Brooks, JAY Z, Justin Timberlake, Eminem and Romeo Santos; and the renewed tradition of college football at the home of the Yankees with over a dozen games featuring iconic institutions such as Notre Dame, Army, Boston College, Syracuse and Penn State.

The Yankees president has also been the driving force behind the creation, organization and implementation of the New Era Pinstripe Bowl. The nationally broadcast contest — which has drawn approximately 40,000 fans per game since its inception in 2010 — provides the schools, their alumni and traveling supporters the unparalleled and thoroughly unique opportunity of enjoying a full week of bowl festivities in New York City during Christmas week. In 2018, Levine organized a Yankees investment in prominent esports company Vision Esports.

From 1995 through 1997, he was chief negotiator for Major League Baseball. In 1996, he negotiated the labor agreement that for the first time included revenue sharing, luxury taxes and Interleague play. Prior to that, Levine served as principal associate deputy attorney general and principal deputy attorney general at the United States Department of Justice. He has also served as a special delegate to the United States Department of Labor and was vice chair and a board member for the Hudson River Park. Levine currently serves on the board of the Taylor Hooton Foundation and Hofstra University, and has served on the boards of the ASPCA, George Washington University and the Yogi Berra Museum.

Levine has served on the board of directors of the New Jersey Nets and New Jersey Devils and is a member of the board of directors of the YES Network, Legends Hospitality, LLC, and NYCFC. He is also an officer of Yankee Global Enterprises, LLC. Additionally, Levine has served or serves on the international, labor policy, diversity and legislative committees of Major League Baseball.

Born on February 22, 1955, in Brooklyn, N.Y., Mr. Levine received a bachelor of arts degree from George Washington University in 1977, and in 2011 was named as chair of the school’s athletic committee. His strategic plan led to the GW basketball team winning its first national championship, the 2016 National Invitation Tournament. He now serves as vice chair of the Hofstra Athletic Committee. In 2018, City & State magazine named him one of its 50 over 50 leaders in New York, and Business Week listed him as one of the top 100 influential persons in sports. Levine has also garnered five Emmy Awards for his work with YES Network programming. He received a J.D. from Hofstra University School of Law in 1980. He and his wife, Mindy, reside in Manhattan.