Almost from the beginning, the George Washington University has been a seat of medical education, research and care in the nation’s capital. GW medical students and doctors have faced the nation’s crises, from the successful and attempted assassinations of two U.S. presidents to pandemics and other public health emergencies.

The medical school of Columbian College was founded in 1824 as the National Medical College—just the 11th medical school in the country. In 1844, the GW Infirmary began operation as the first general hospital in Washington, D.C., essentially giving the medical department a teaching hospital. 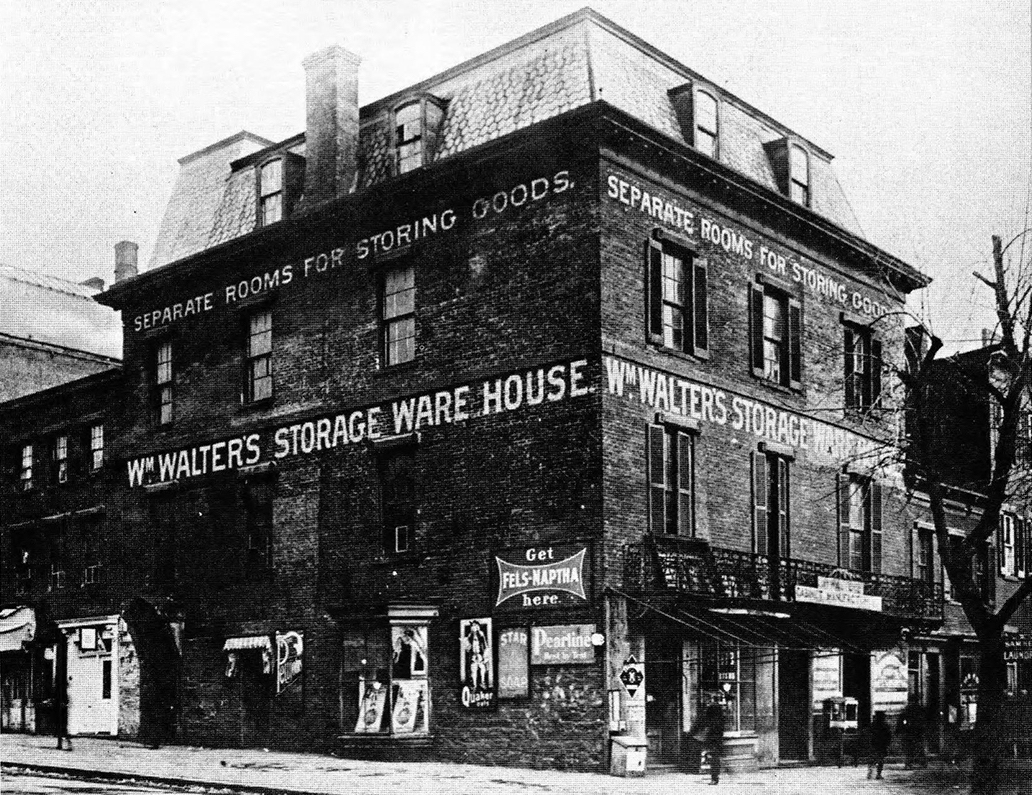 This building, pictured after it was sold for commercial use in the mid-19th century, was the original home of the medical school.

Doctors, students and the institution itself faced a generational crisis during the Civil War. Faculty loyalties, like those of the students, were split: Alexander Y. P. Garnett, a professor of anatomy since 1844, left the school to become personal physician to Confederate President Jefferson Davis, while former dean and faculty member Robert King Stone provided medical care to Abraham Lincoln. 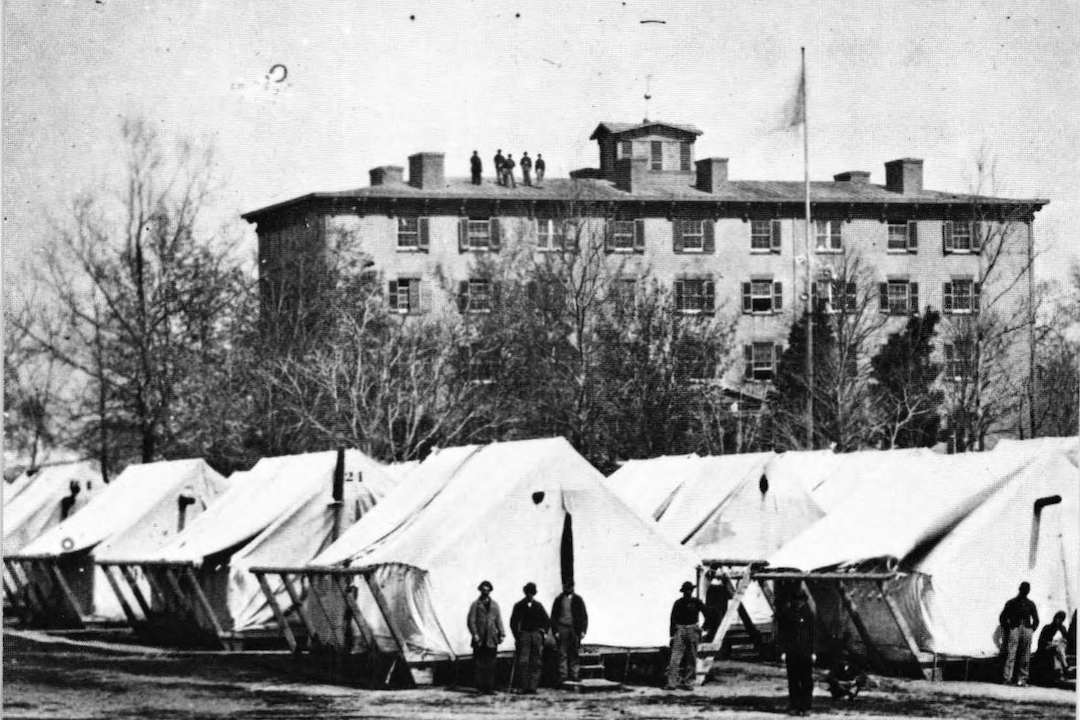 Tent wards in front of the College Hill building.

The U.S. government seized the infirmary and the university’s main building on College Hill, , just north of what is now Florida Avenue between 14th and 15th streets, NW. When the infirmary burned down in 1861, the College Hill building was converted into a major military hospital with 884 beds. Among those who helped nurse wounded soldiers at the Columbian College and Carver General Hospitals on campus was poet Walt Whitman, who in 1864 wrote to his mother, “I [gave] in Carver hospital a great treat of Ice Cream, a couple of days ago, went around myself through about fifteen large wards—I bought some ten gallons, very nice…Many of the men had to be fed; several of them I saw cannot probably live, yet they quite enjoyed it. I gave everybody some—quite a number [of] Western country boys had never tasted ice cream before.” 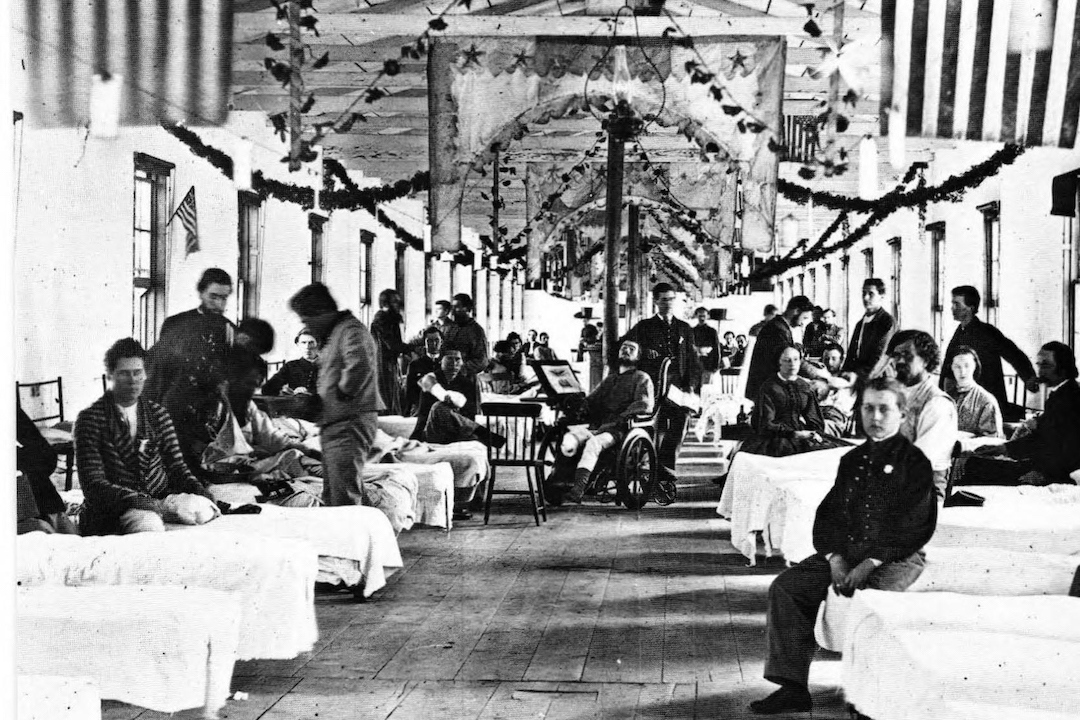 When Abraham Lincoln was shot at Ford’s Theatre in 1865, doctors from Columbian College witnessed the tragedy and were at the heart of the effort to save him. GW alumnus Albert Freeman Africanus King, M.D. 1861, climbed from his seat just below the president’s box to join in the effort to revive Mr. Lincoln. Dr. King would go on to become professor and chair of obstetrics and serve as dean of the GW’s National Medical College from 1879 to 1894.

Professor of surgery and anatomy John F. May, another former GW dean, attended Mr. Lincoln’s deathbed, as did Robert King Stone. Dr. May was later called to identify the body of John Wilkes Booth after the assassin was shot by a pursuing Union soldier.

More than a century later, an attempted assassination would have a better outcome—and GW doctors would be in the spotlight as they successfully treated the wounded president. When Ronald Reagan was shot in 1981, he was rushed to GW Hospital, where head of trauma Joseph Giordano, RESD ’73, former chair of the Department of Surgery, and Lewis B. Saltz, professor of surgery, were among the first doctors to treat him.

Changes at the Turn of the Century 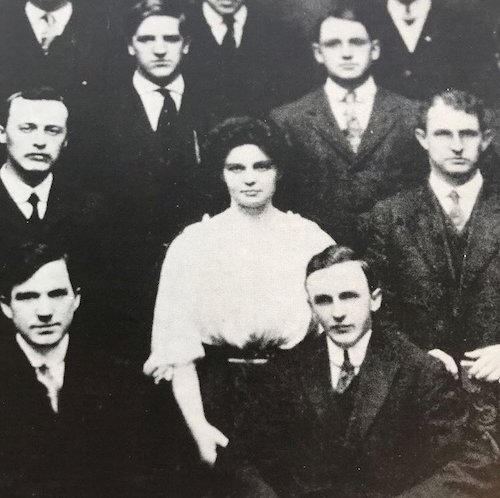 Unfortunately, the school quickly decided that permitting men and women to work together was “a strain on modesty.” They would not admit women again until 1911, and then only through the nursing program.

In 2021, all three of GW’s medical schools are headed by women: The Milken Institute School of Public Health by Dean Lynn Goldman, the School of Nursing by Dean Pamela Jeffries and the School of Medicine and Health Sciences, as well as the strategic direction of the medical enterprise itself, by Vice President for Health Affairs and SMHS Dean Barbara Lee Bass. 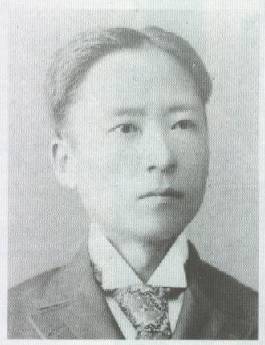 In 1892, Seo “Phillip” Jaisohn became the first Korean-American graduate of the National Medical College. He would go on to become a champion of Korean independence.

The physical footprint of the medical enterprise underwent a series of evolutions in the late 1890s and early 1900s. In 1898, Columbian College remodeled its Preparatory School building on H Street to become the new hospital, and in 1903 the National Medical College became the Columbian Medical School.

Just a year later, the Columbian University Medical School and Hospital were rededicated the George Washington University Medical School and Hospital. At that time, the faculty included immunologist Walter Reed, who confirmed the theory that yellow fever was transmitted by mosquito bites, and groundbreaking epidemiologist Theobald Smith, who discovered the causes and transmissions of several infectious and parasitic diseases.

A New Age of Medicine at GW 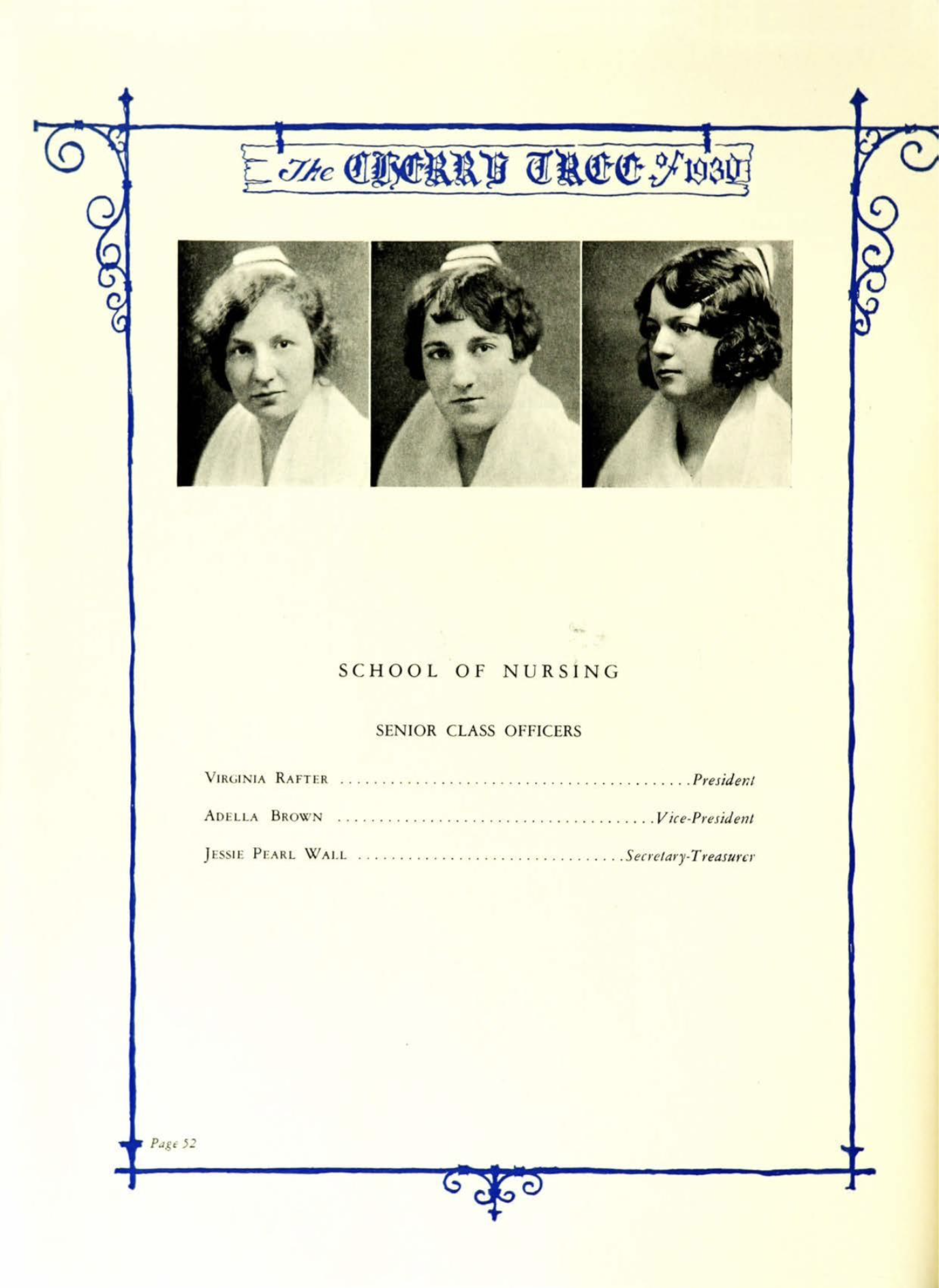 On March 1, 1948, the George Washington University Hospital opened at the corner of Pennsylvania Ave and 23rd Street. 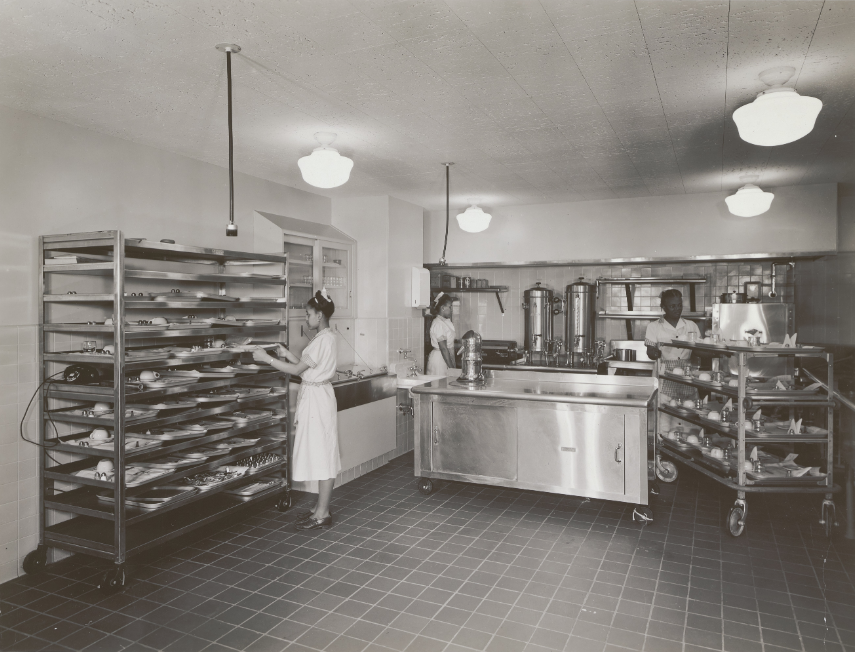 Hospital workers prepare trays for patients in the third-floor pantry of the GW Hospital, 1948. 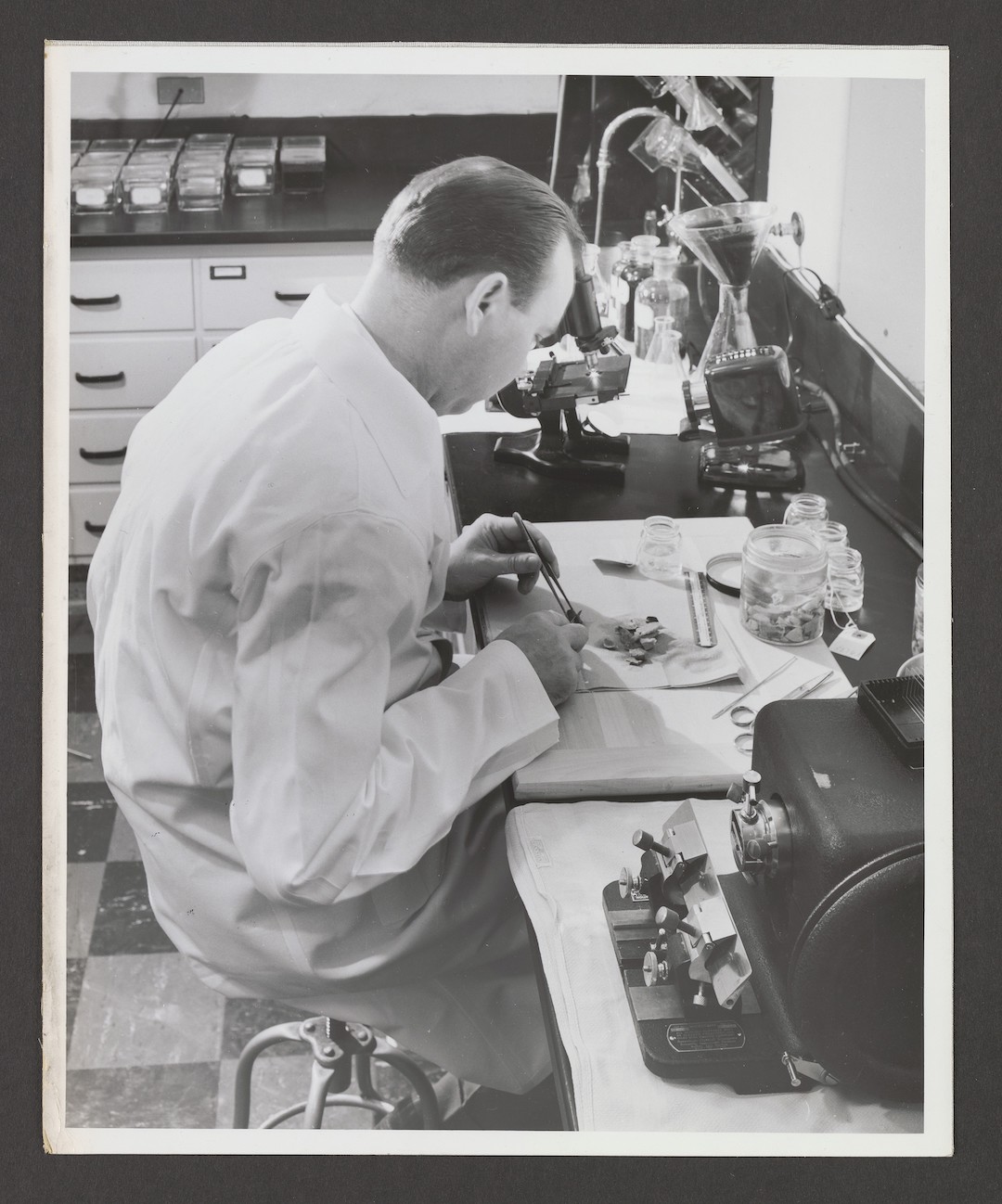 Among the students earning a GW degree as the hospital’s new home was established was Julius “Julie” Axelrod, a son of Polish immigrants who received his Ph.D. in pharmacology in 1955. In 1970, Dr. Axelrod earned the Nobel Prize in in Medicine for his discoveries concerning nerve impulse transition. In 1971 he received an honorary J.D. from GW, and in 1974 he became a professorial lecturer in pharmacology at GW’s School of Medicine and Health Sciences. 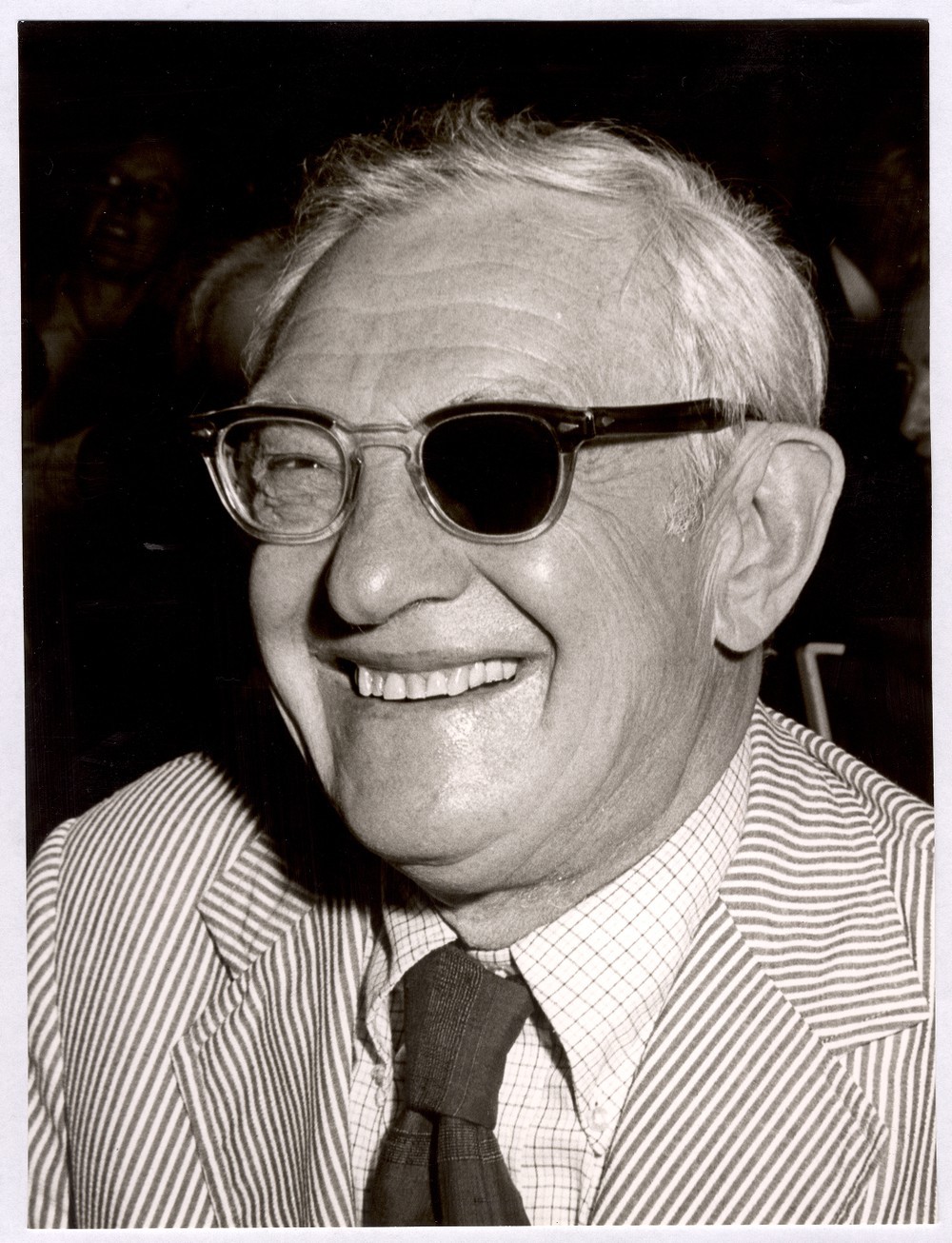 In 1968, SMHS and Children’s National Hospital established a clinical partnership basing the school’s Department of Pediatrics at Children’s National and providing joint appointments to faculty members in pediatrics. It was one of many partnerships GW’s health enterprise established in the region and nationwide. In 2010, the partnership received a five-year, $20 million Clinical and Translational Science Award from the National Institutes of Health—one of only 60 such awards within the U.S.—to accelerate basic laboratory research discoveries into clinical practice. 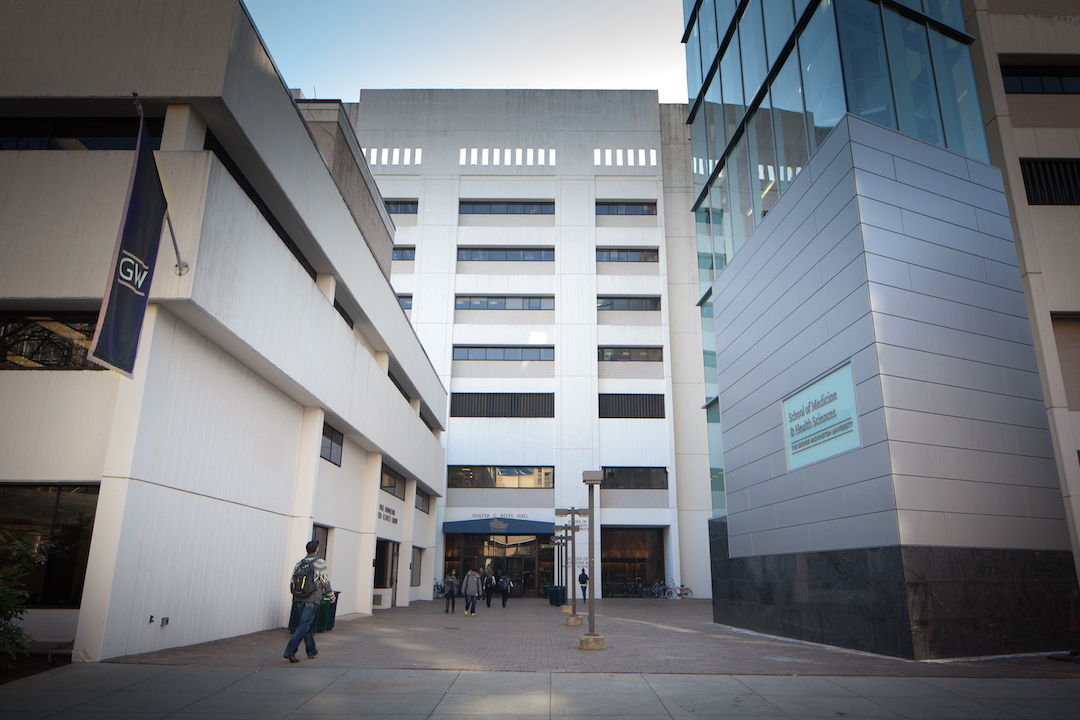 The Walter G. Ross Hall, where most medical classrooms at GW are still located, opened on 23rd and Eye streets, NW, in 1972.

In 1970, Thomas E. Piemme became a professor of medicine and director of GW’s Division of General Medicine, which managed outpatient clinical services and the emergency room. Dr. Piemme wanted to use the services of physician assistants, then a relatively new type of care provider, but found that few training programs existed. He advocated for the establishment of a Physician Assistant Program, which launched in at GW 1972.

GW pulled together programs from across schools and departments to establish its School of Public Health and Health Services in 1997. It remains the only school of public health in the nation’s capital. In 2014 the Milken Institute, the Milken Family Foundation and Sumner Redstone Charitable Foundation donated a combined $80 million to the school, establishing the Sumner M. Redstone Global Center for Prevention and Wellness at the renamed Milken Institute School of Public Health. The school has been at the forefront of major public health research in the past decade, including a landmark report on the devastating death toll of Hurricane Maria in Puerto Rico that drew international attention. 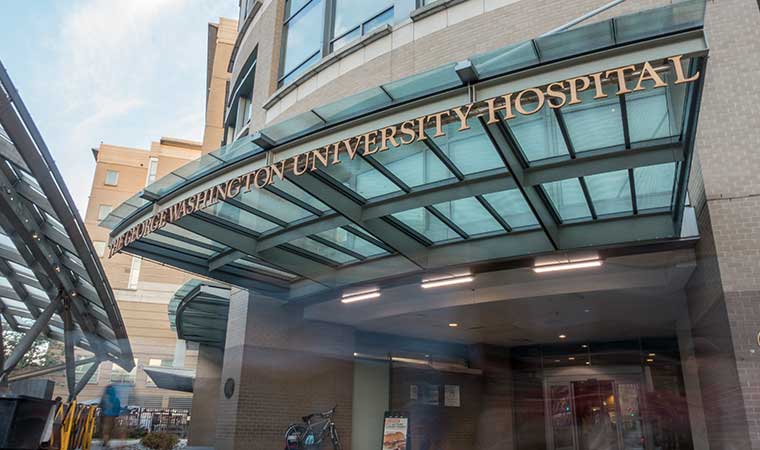 In August 2002 GW opened the new GW Hospital, the first new hospital in Washington, D.C., in more than 30 years, across 23rd Street from the previous facility. 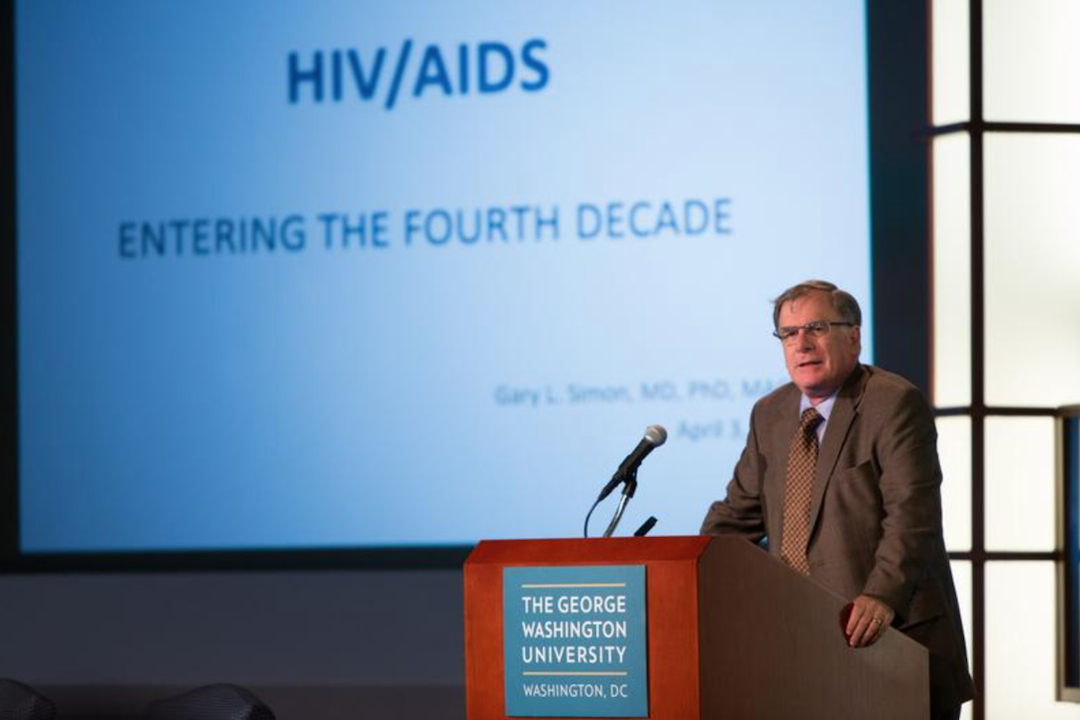 Gary Simon, now Walter G. Ross Professor of Medicine and director of the Division of Infectious Diseases at GW School of Medicine and Health Sciences, identified the first case of AIDS in the District of Columbia in 1981. In 2010, Dr. Simon and Alan Greenberg, M.D. ’82, professor and chair of the Department of Epidemiology and Biostatistics at Milken Institute School of Public Health, received a five-year starter grant from the NIH to become a developmental Center for AIDS Research. In 2015, the center achieved full CFAR status with another $7.5 million grant.

As it did during the Civil War, GW’s medical enterprise has taken center stage during another generational public health event: the spread of the novel coronavirus. When the World Health Organization declared COVID-19 a global pandemic on March 11, 2020, GW’s medical deans—Dr. Bass, Dr. Goldman and Dr. Jeffries—were holding the first in a series of comprehensive town halls on the impact and clinical aspects of the virus. And the infrastructure established by the Center for Aids Research, including GW’s existing clinical relationship with the D.C. community, was part of the reason GW was chosen as a Phase III Clinical Trial site to test the Moderna mRNA-1273 COVID-19 vaccine later that year. The vaccine was successfully approved for emergency use in December. 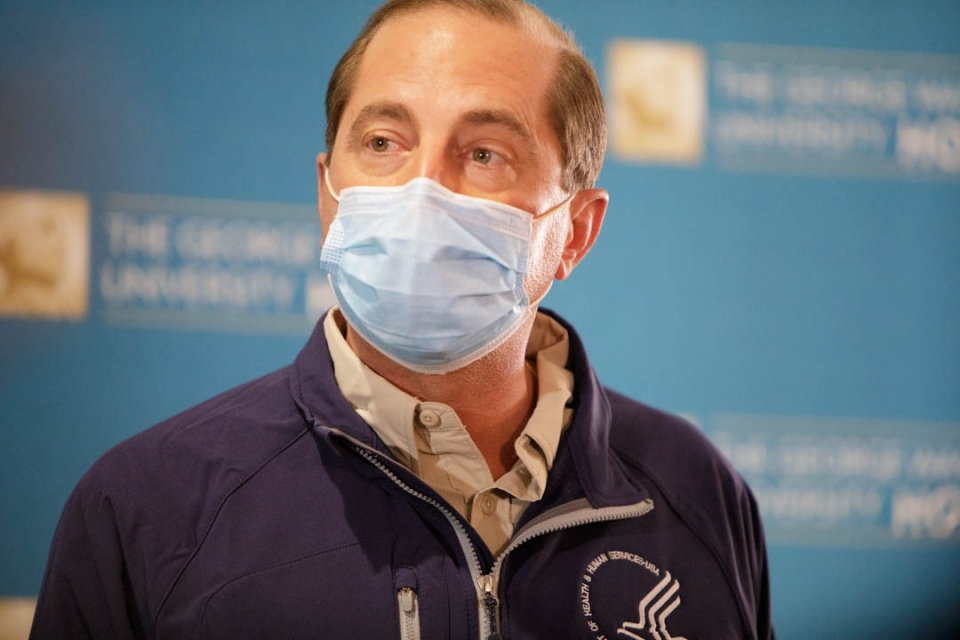