At the George Washington University, athletic traditions stretch way back. Below is a selection of highlights of GW sports through the school’s 200 years.

Hail to the Buff and Blue

When it was founded in 1821, the colors of Columbian College were blue and orange. In 1904, when the college was renamed the George Washington University, its colors were changed to buff and blue in commemoration of the uniform George Washington wore when he resigned as commander in chief of the Continental Army in 1783. 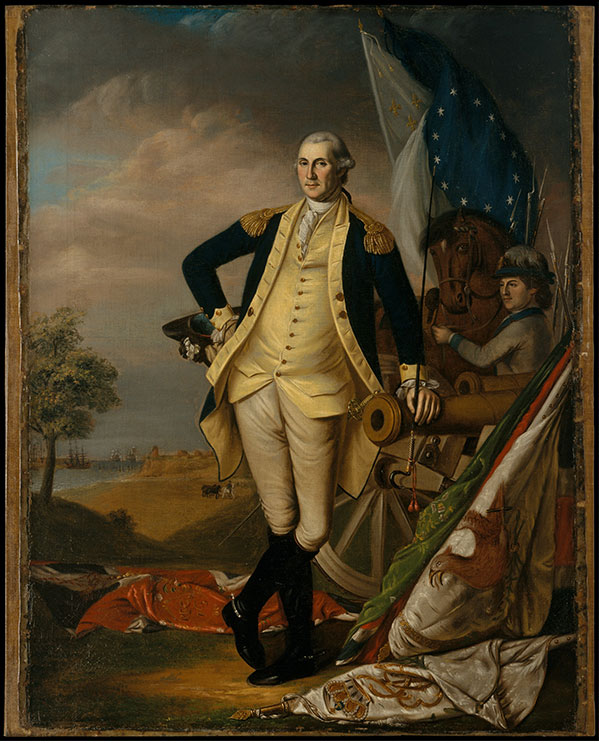 The first president in the buff and blue.

Then-student Eugene Sweeney wrote “Buff and Blue” in 1924 as part of a contest to compose a new fight song for GW’s football team. In the 1990s, Patrick M. Jones rewrote the song so that it could be used for any GW athletic contest and entitled it “The GW Fight Song.” 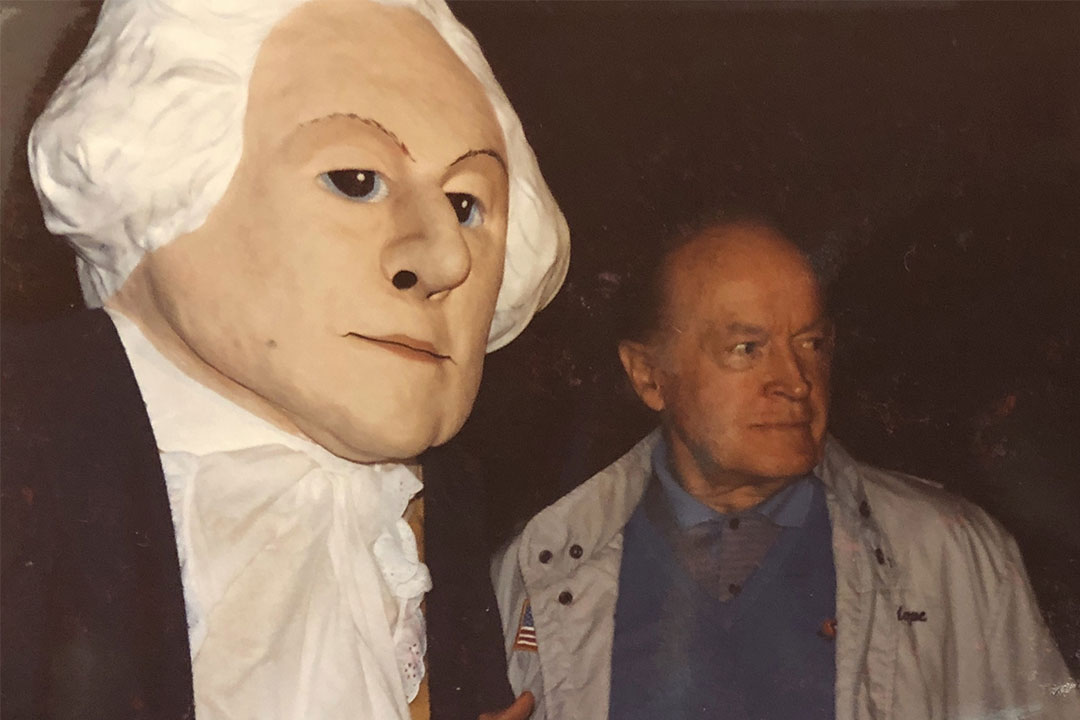 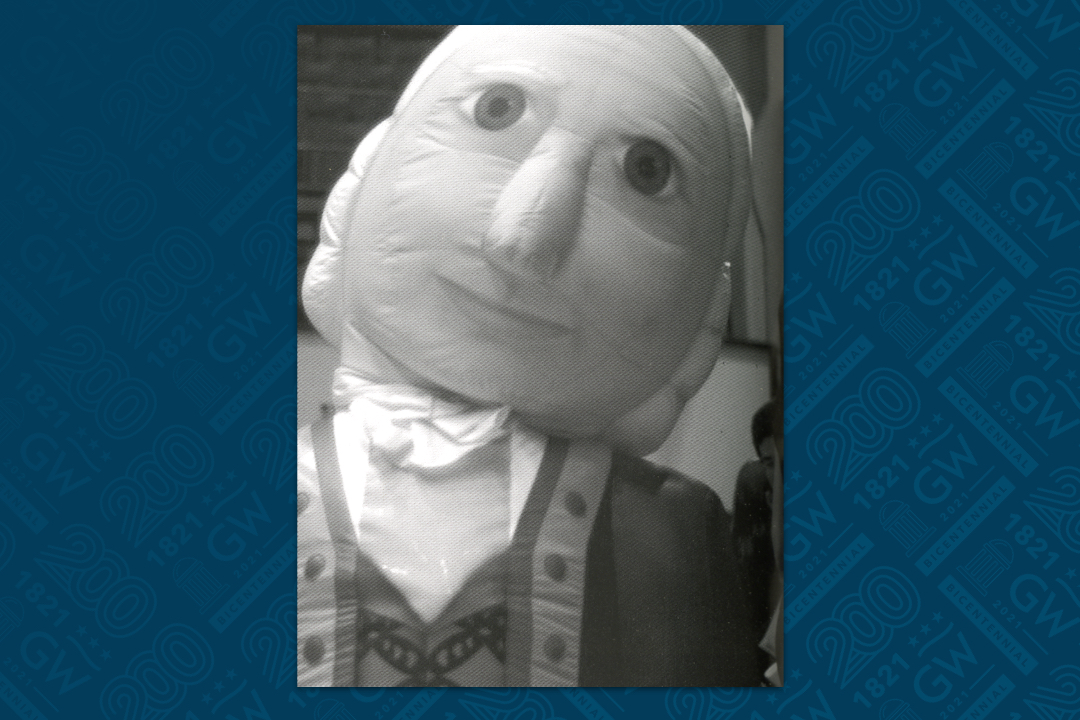 GW’s official mascot, “George,” has taken numerous forms over the years, but has always involved a version of the Continental Army uniform and, usually, cartoonish headgear. And though D.C. pro sports teams haven’t always had much to celebrate, when they have—as at the Washington Capitals’ Stanley Cup victory parade in 2018—George has been at the party.

A Tour of the Facilities 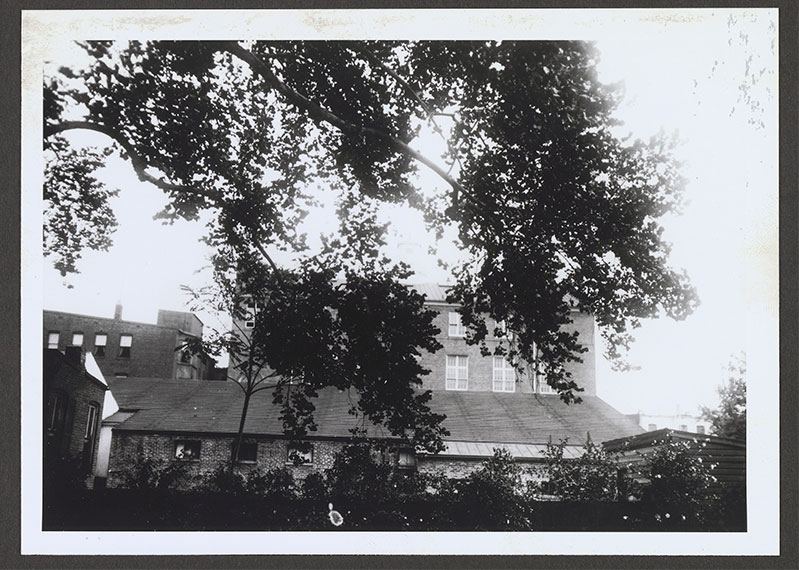 GW’s first official gym, known as the “Tin Tabernacle,” was completed in 1924 and stood in what is now University Yard. It was demolished in 1976.

Hall of Fame NBA coach Red Auerbach, M.A. ’41, HON ’93, who came to GW on a basketball scholarship, credited playing on the less-than-optimal design of the Tabernacle as a student athlete with influencing his coaching technique. Since there was little room out of bounds, players had to be able to stop quickly lest their momentum carry them right into a wall. When Mr. Auerbach became a coach—on professional courts where the consequences of going out of bounds were less painful—he still emphasized spatial awareness and mobility in his players. 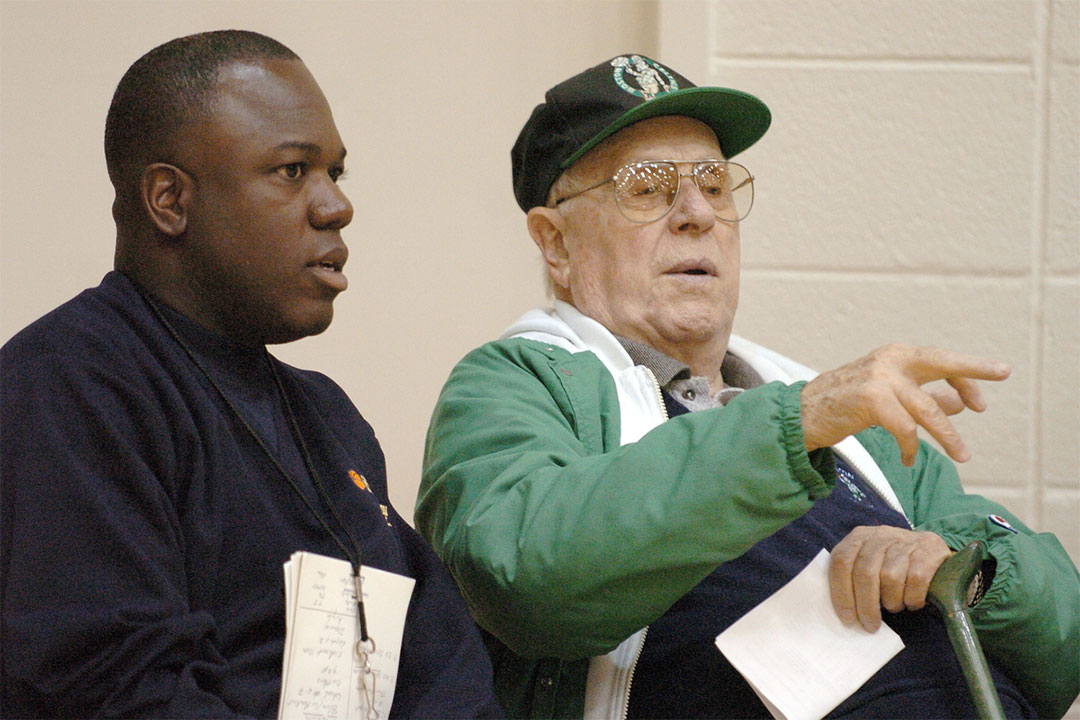 The Charles E. Smith Center—named for the father of the late trustee emeritus Robert H. Smith, a tremendous supporter of the university—now houses the majority of GW’s intercollegiate varsity sports, was built in 1975 and renovated from 2008 - 2010. 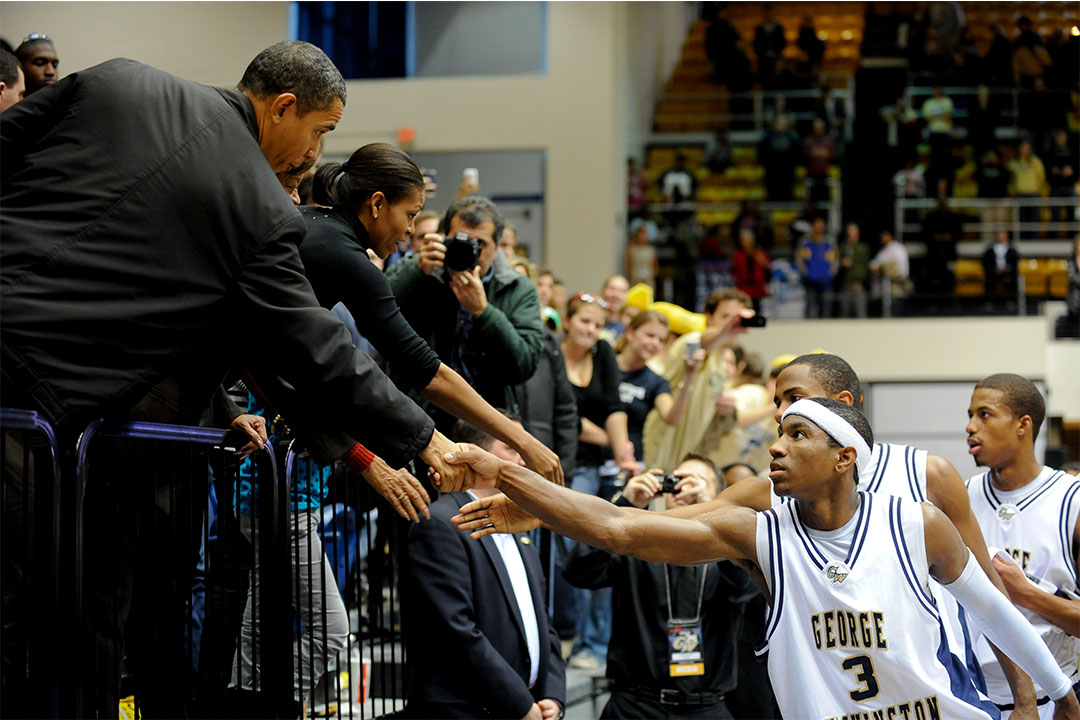 President Barack Obama and his family were courtside at the Smith Center in 2009 for a men’s basketball game against Oregon State, which was coached by the brother of First Lady Michelle Obama, HON ’10. In 1995, President Bill Clinton caught a game against top-ranked University of Massachusetts—a nail-biter that ended, 78-75, in GW’s first-ever victory over a team ranked No. 1 in the country. 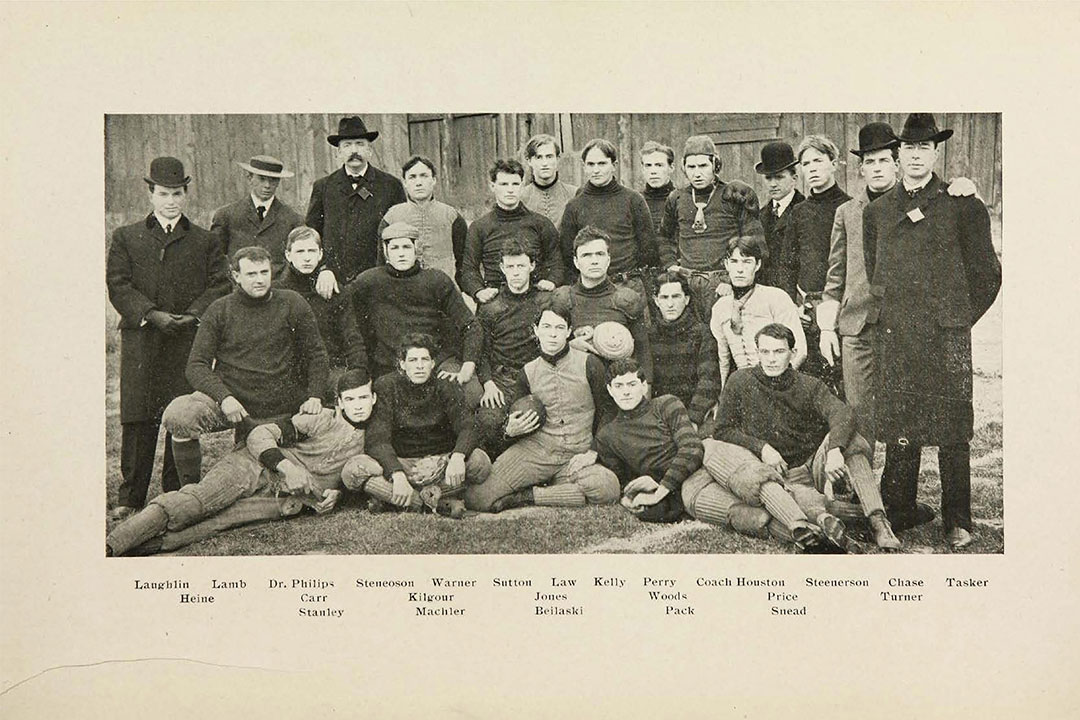 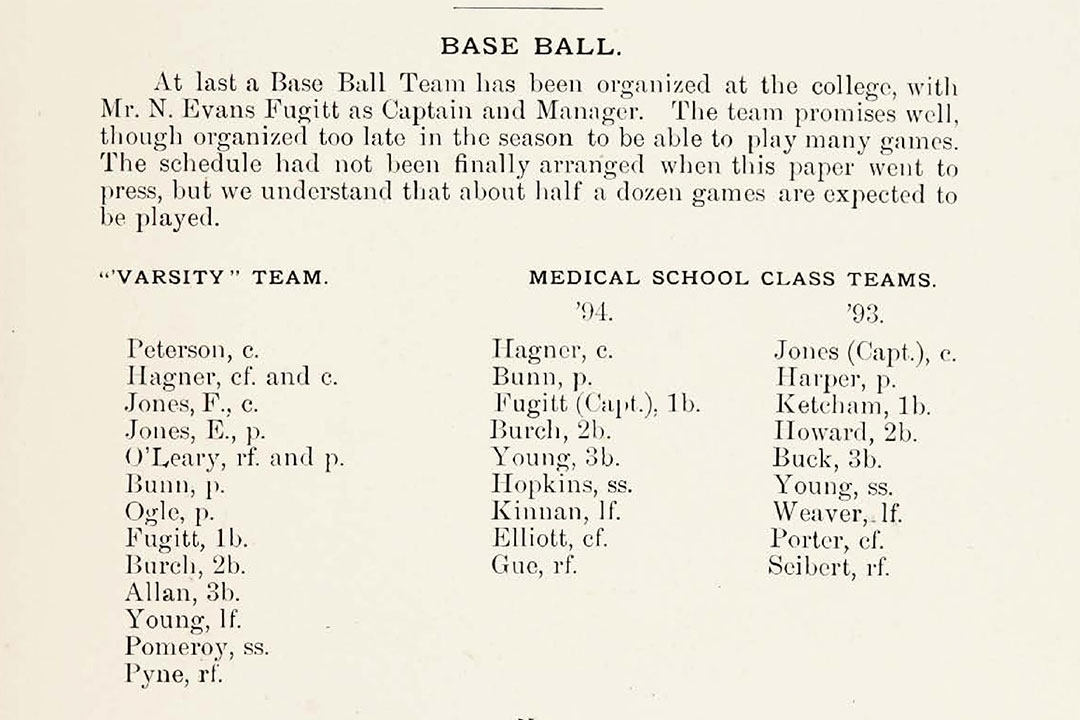 Varsity baseball came to GW at the end of the 19th century, but for some students, that was too long to wait: The 1892 Columbiad yearbook declared that baseball teams had been fielded “at last.” 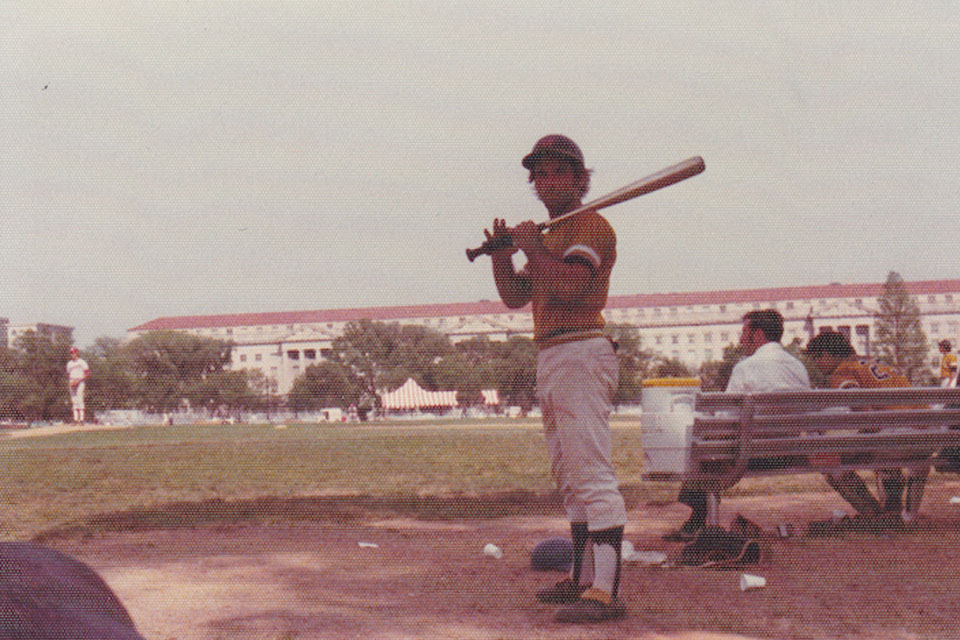 Over its century-plus history, the GW baseball team has practiced in some picturesque and even historic locations—including the Ellipse on the National Mall between the Washington Monument and the White House, its official home until 1993. 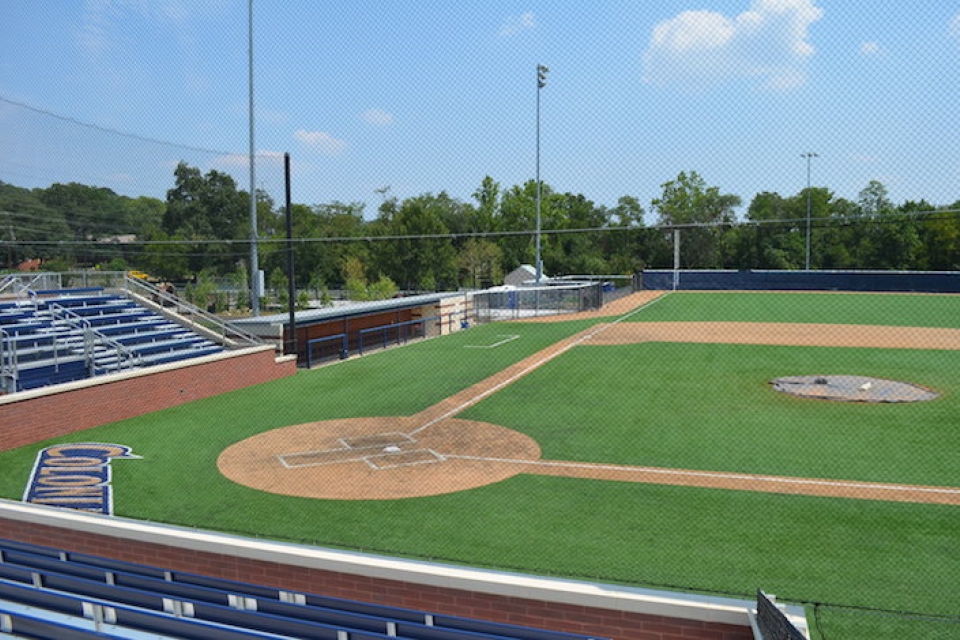 The team got a field to call home in 2014 and an onsite clubhouse and training facility four years later, with two donor gifts each of them of at least $2 million. The first came from trustee, alumnus and one-time GW outfielder Avram “Ave” Tucker, B.B.A. ’77, whose gift included targeted funds to support student athletes and enhance the team’s facilities in Arlington, Va. In his honor, the facility was renamed Tucker Field at Barcroft Park. In 2018 at Tucker Field, the team dedicated Fassnacht Clubhouse and training facility, the first permanent on-site clubhouse in the history of GW baseball, thanks to numerous gifts from donors, including Dave and Tam Fassnacht. Nate Fassnacht, B.A. ’21, the couple’s son, was on the team and was named 2019 Atlantic 10 Player of the Year before being drafted by the Philadelphia Phillies of MLB.

Taking it to the Mat

GW’s gymnastics program has been a force for decades, capturing its first A-10 championship in 1998 and making five consecutive appearances at NCAA regional meets between 2015 and 2019. 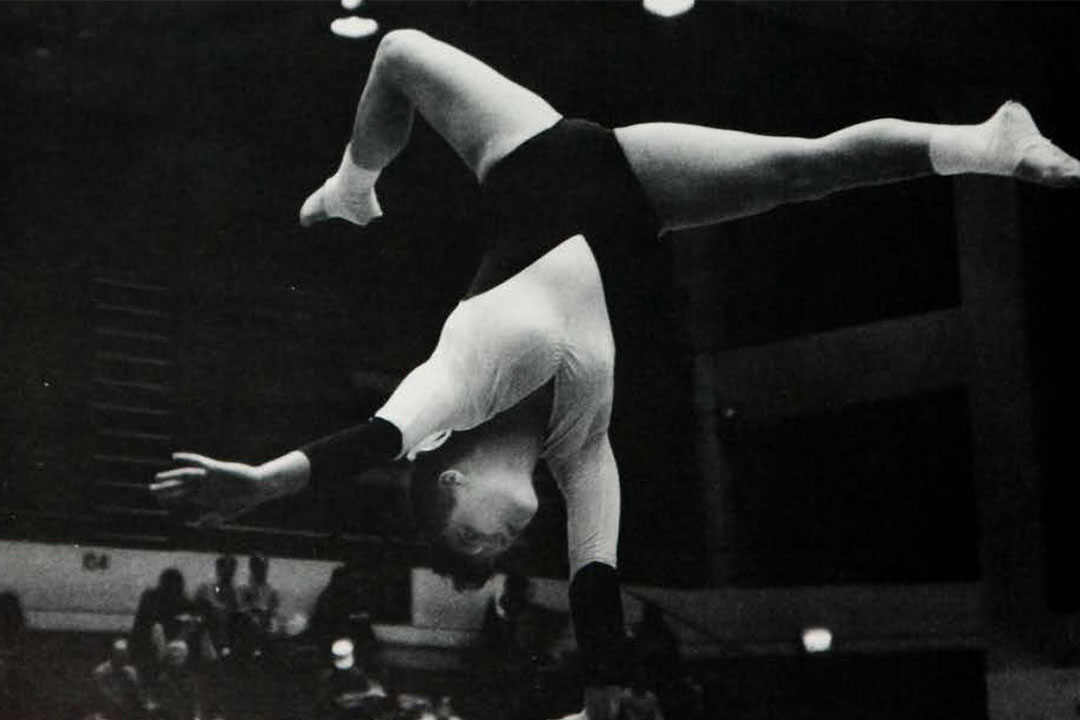 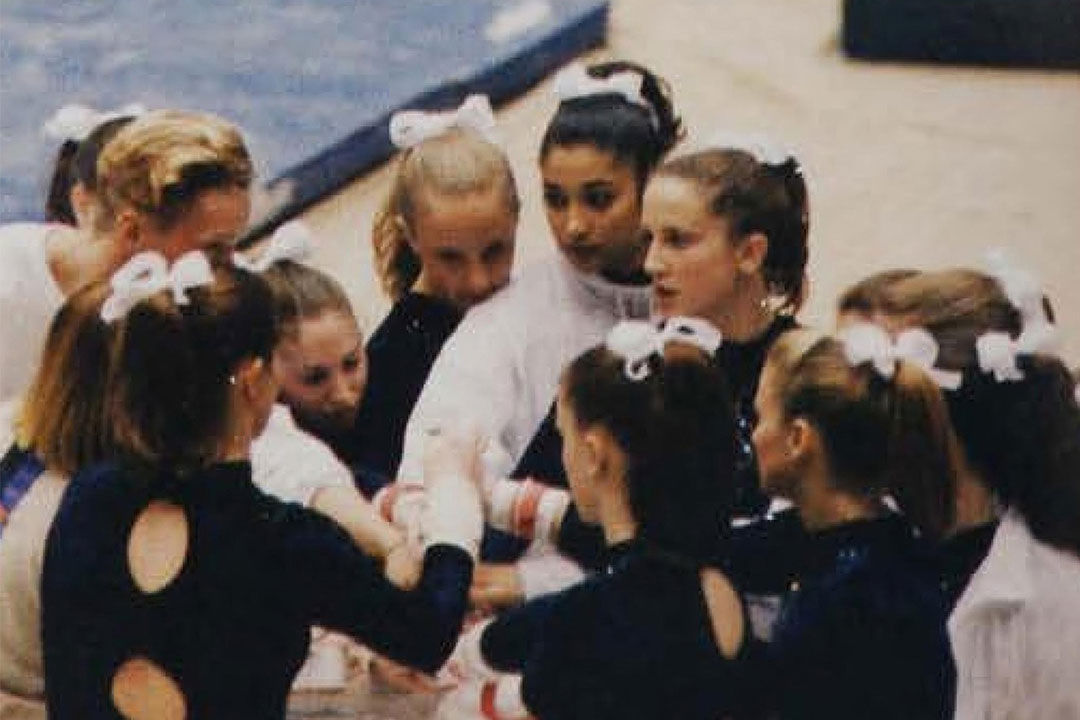 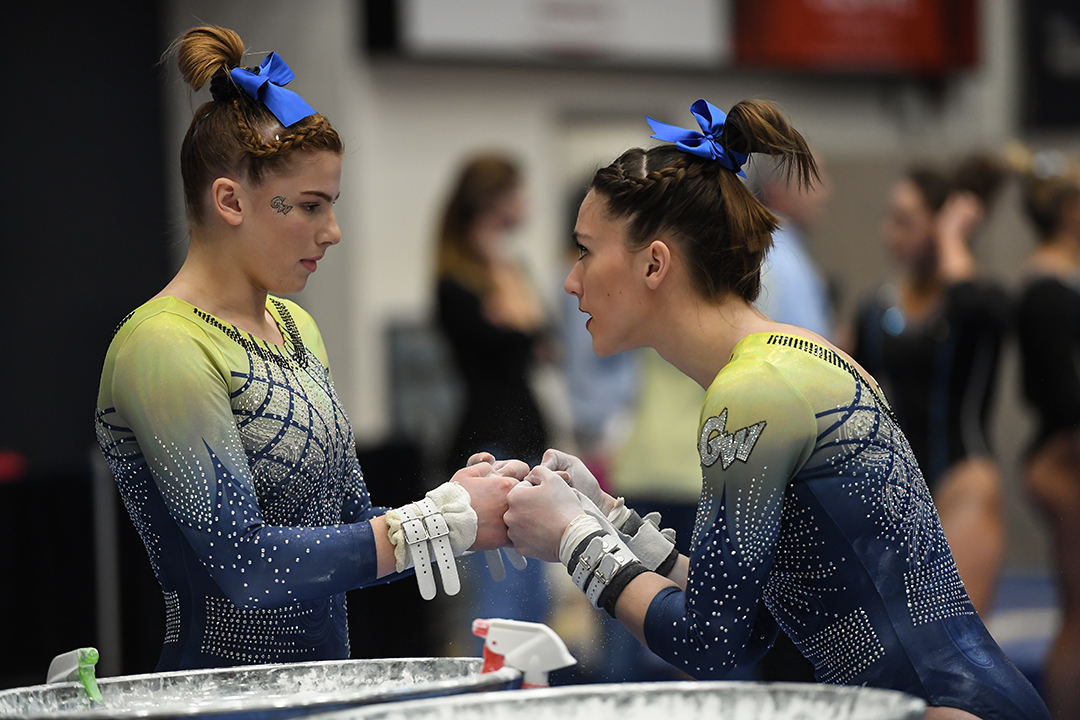 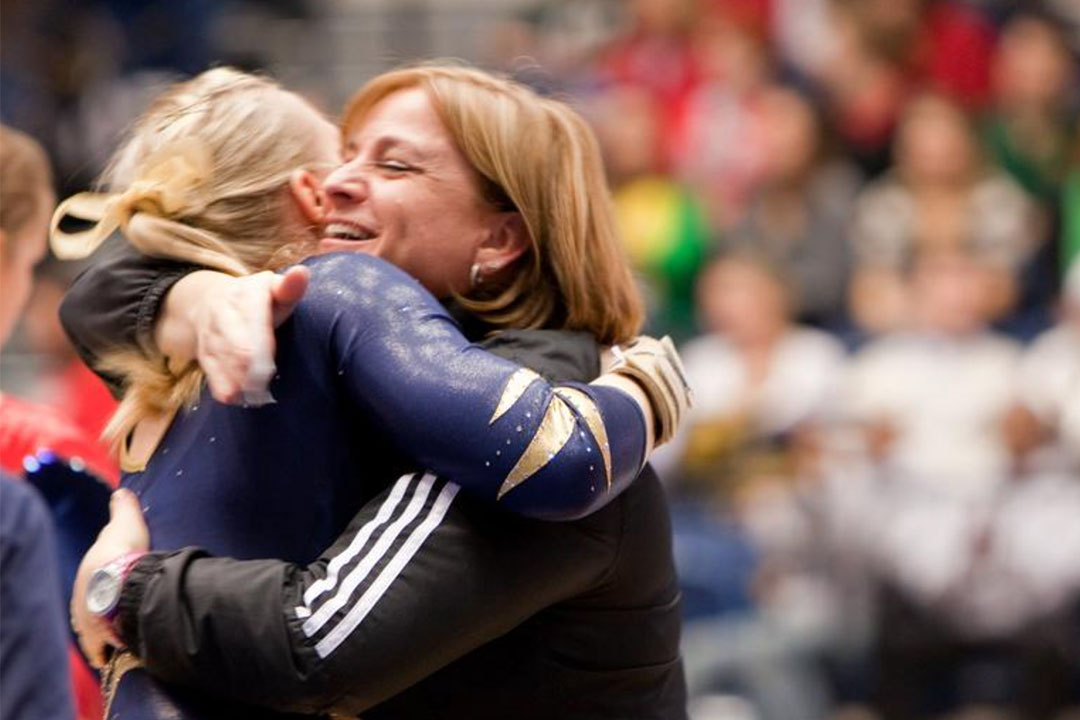 One figure has shaped gymnastics at GW: Margie Foster-Cunningham, now in her 36th year as the head of the program. Ms. Foster-Cunningham, herself a five-time All-American, has coached every gymnast in GW’s program for each event—vault, bars, beam and floor.

Though football is no longer a varsity sport at GW, it thrived in the first half of the 20th century. The 1908 football team was GW’s most successful, winning the conference championship, then called the South Atlantic Intercollegiate Athletic Association, with an 8-1-1 record—despite having no home field. The team had to rent one from the American League for $300. 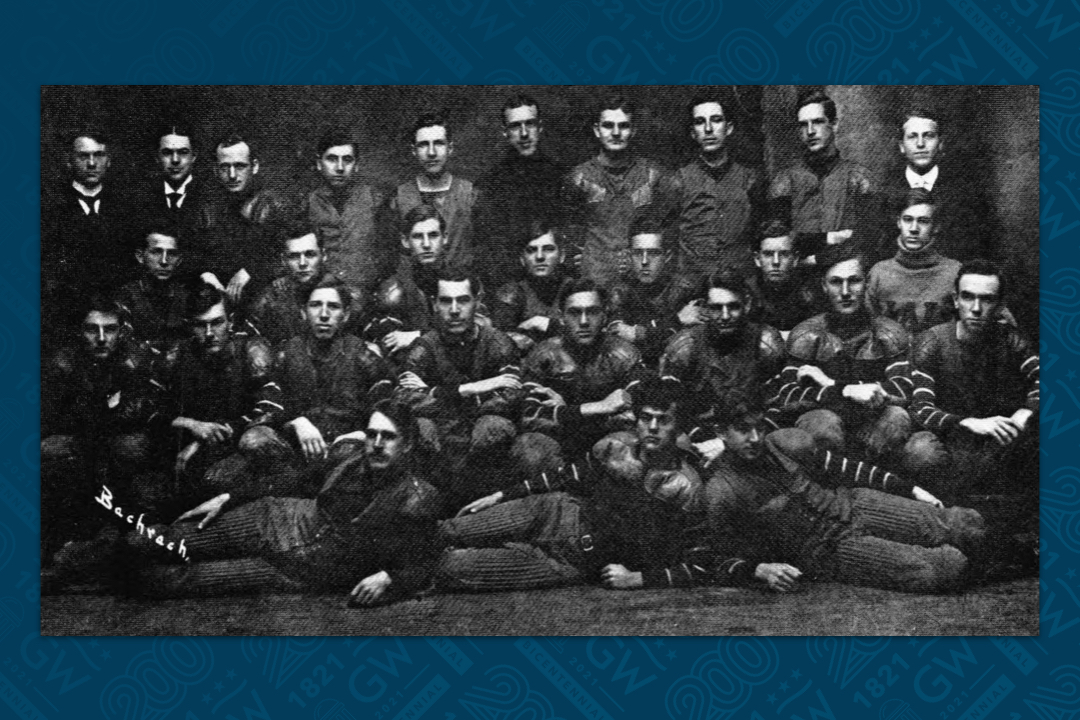 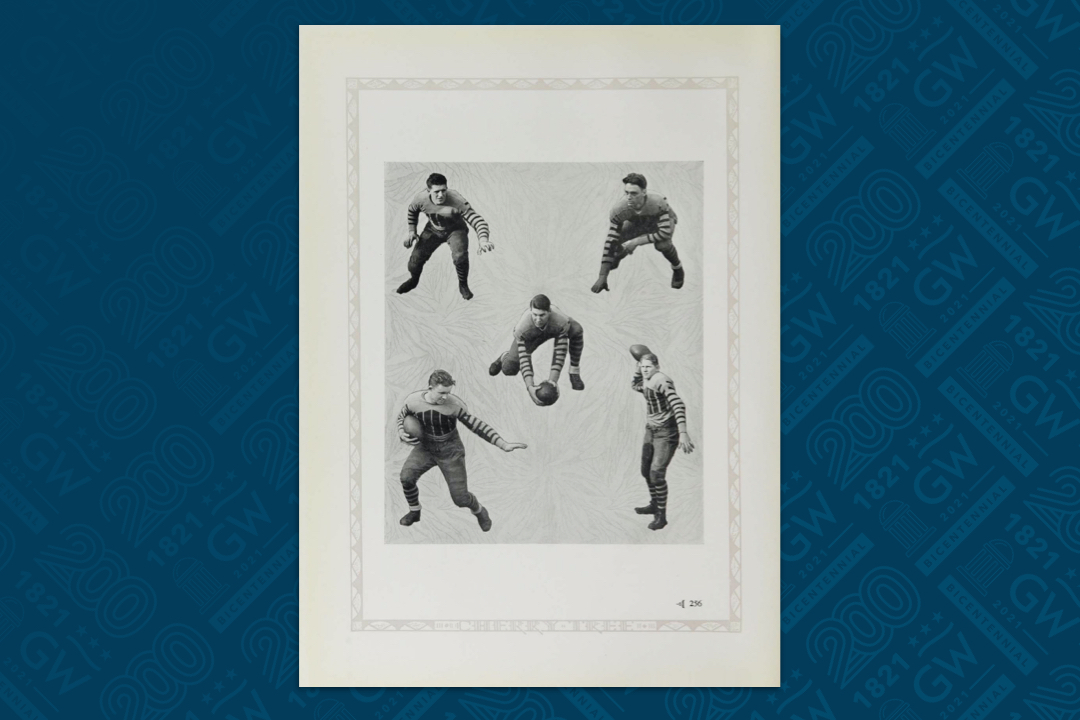 Not all the techniques GW practiced on the gridiron would pass muster today. In this page from the 1931 Cherry Tree yearbook, football student athletes demonstrate the accepted form of the time. 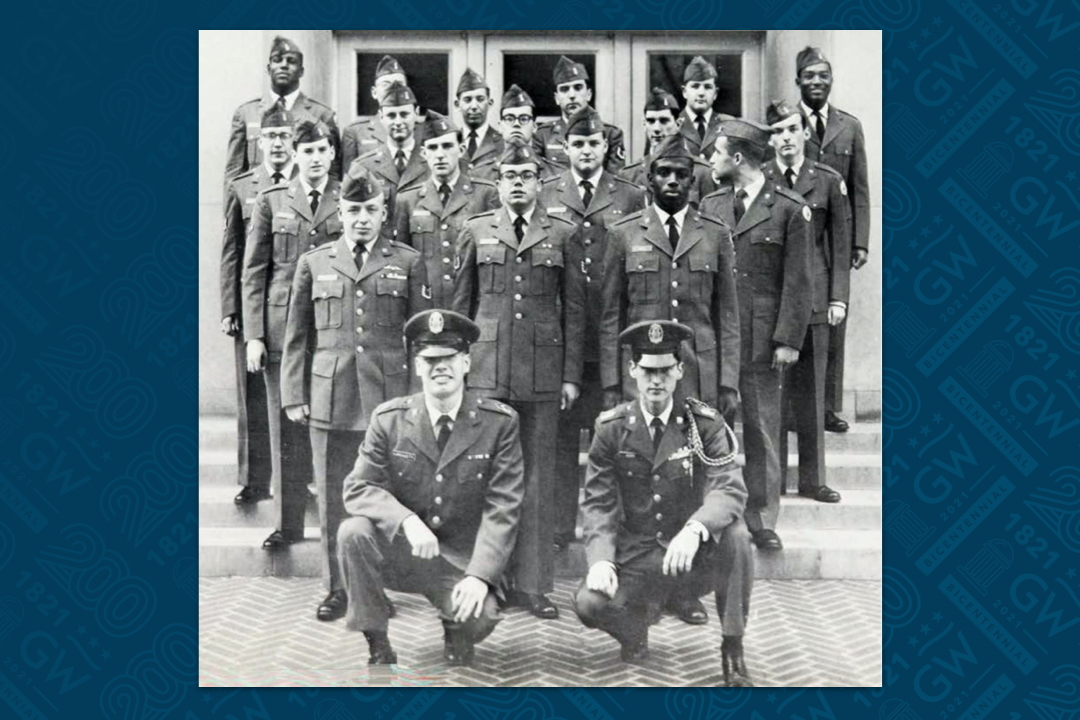 Norm Neverson (second row, far right), B.A. ’67, pictured with fellow cadets from GW’s Air Force ROTC, became the first Black student to receive an athletic scholarship from the university when he was recruited for the football team in 1963. 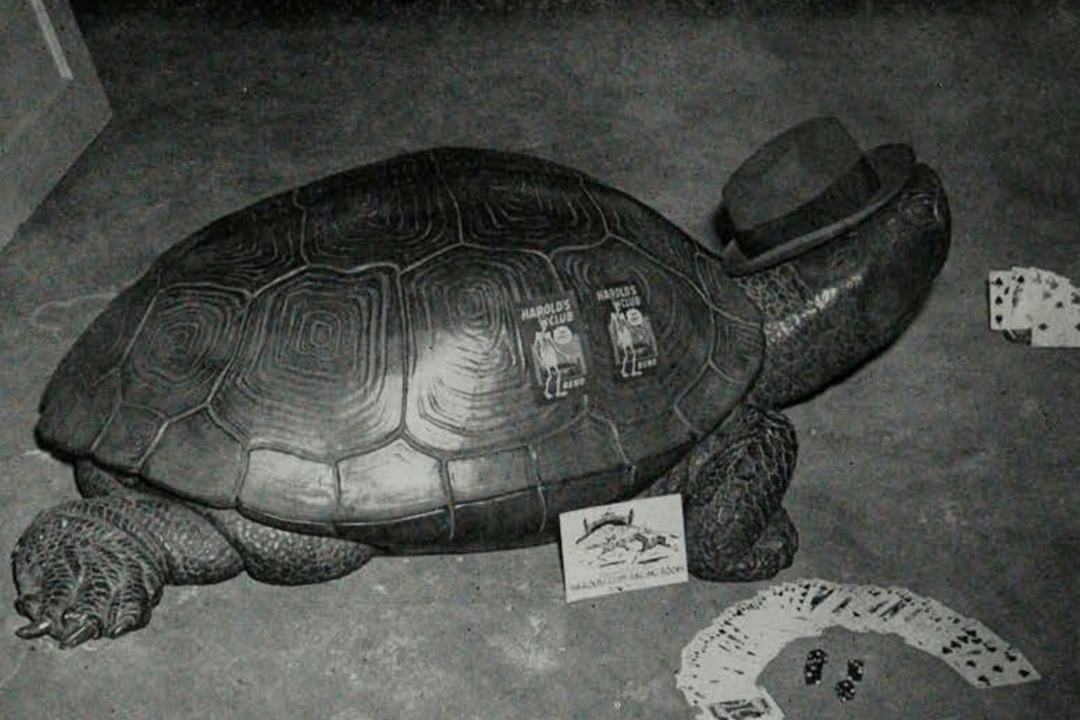 GW fans kidnapped Testudo, the 400-pound bronze turtle statue that served as the University of Maryland mascot, from his pedestal before the homecoming matchup in 1948. Photos of shenanigans starring Testudo appeared in the 1949 edition of the Cherry Tree. 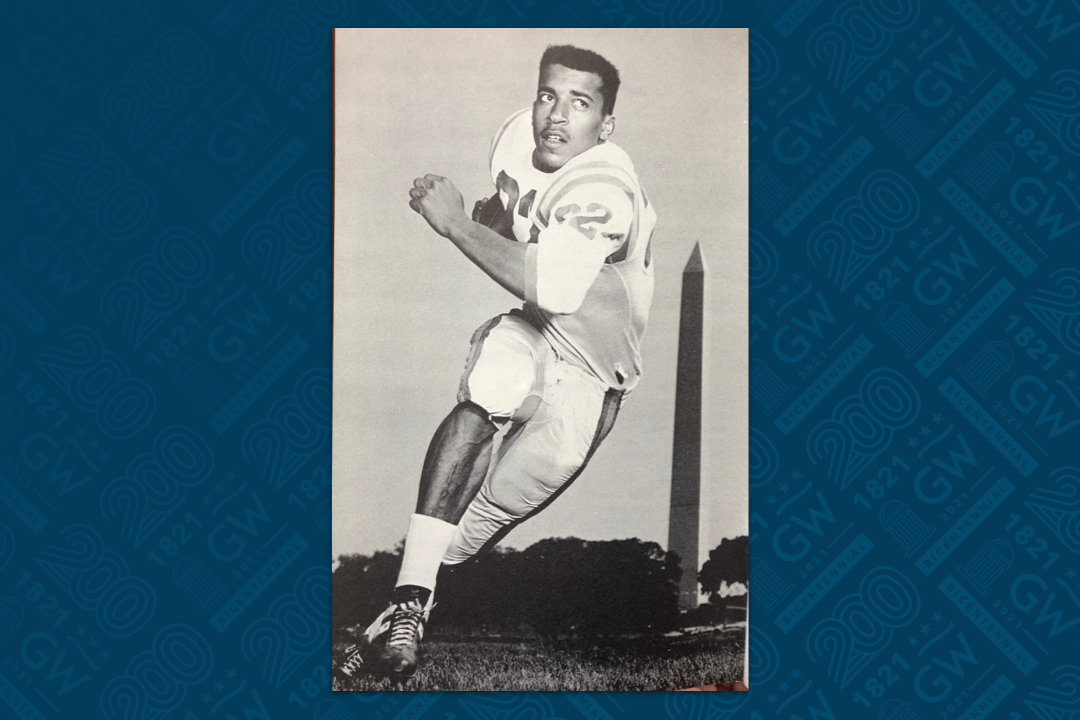 Garry Lyle was the last GW athlete to be drafted by the NFL, going to the Chicago Bears in 1967. Other leagues, however, continue to snap up GW athletes: as well as the basketball stars noted above, the MLB drafted two players as recently as 2019.

A Legacy on the Court

In the GW sports pantheon, basketball might reign supreme. The sport has produced some of the university’s most prestigious athletic achievements: the women’s team has won the Atlantic 10 conference seven times and the men’s team five, including a sweep in 2007. 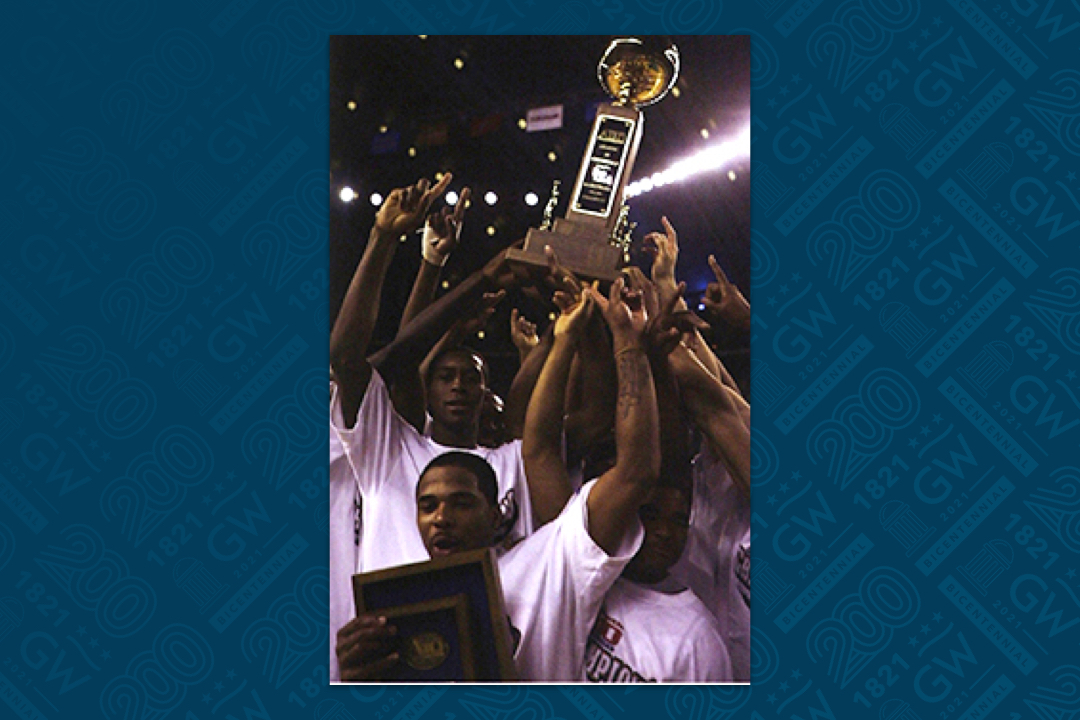 The 2007 men’s basketball team after winning the conference tournament finals. 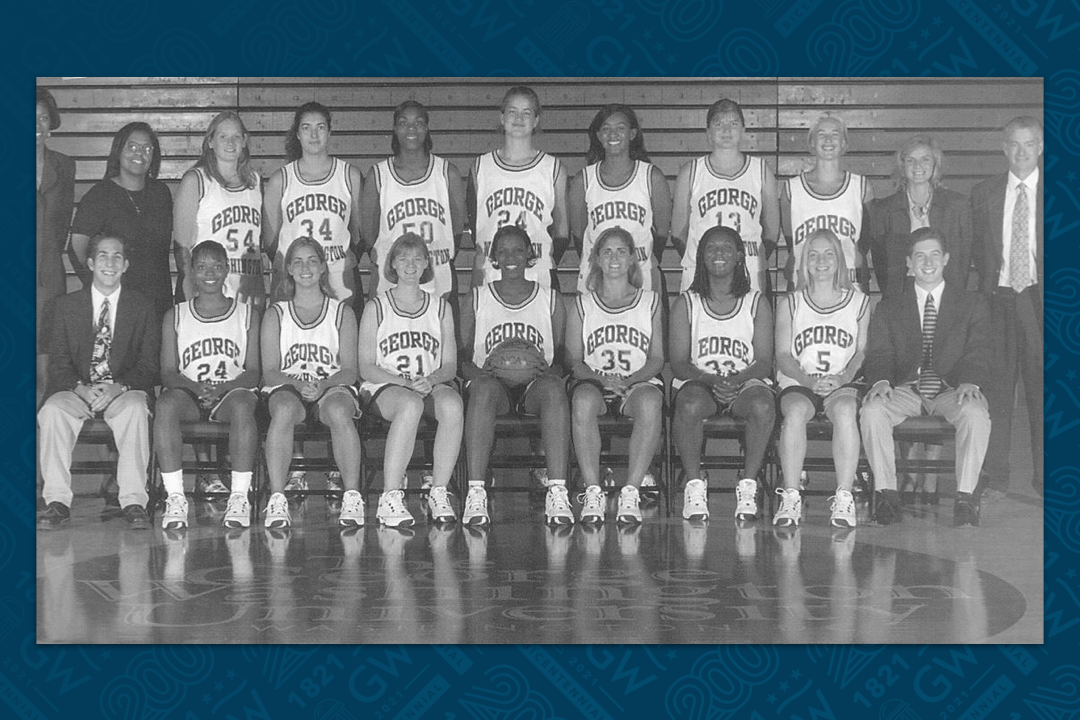 Yinka Dare wasn’t the only pro ballplayer to come out of GW. Just a few of the others include standout Jonquel Jones, who was selected sixth overall in the 2016 WNBA draft; Pops Mensah-Bonsu, B.A. ’06, who played professionally for a decade in a career that spanned the NBA, Europe and the 2012 Olympics; and double alumna Cathy (Joens) Engelbrecht, B.S. ’04, M.P.H. ’09. 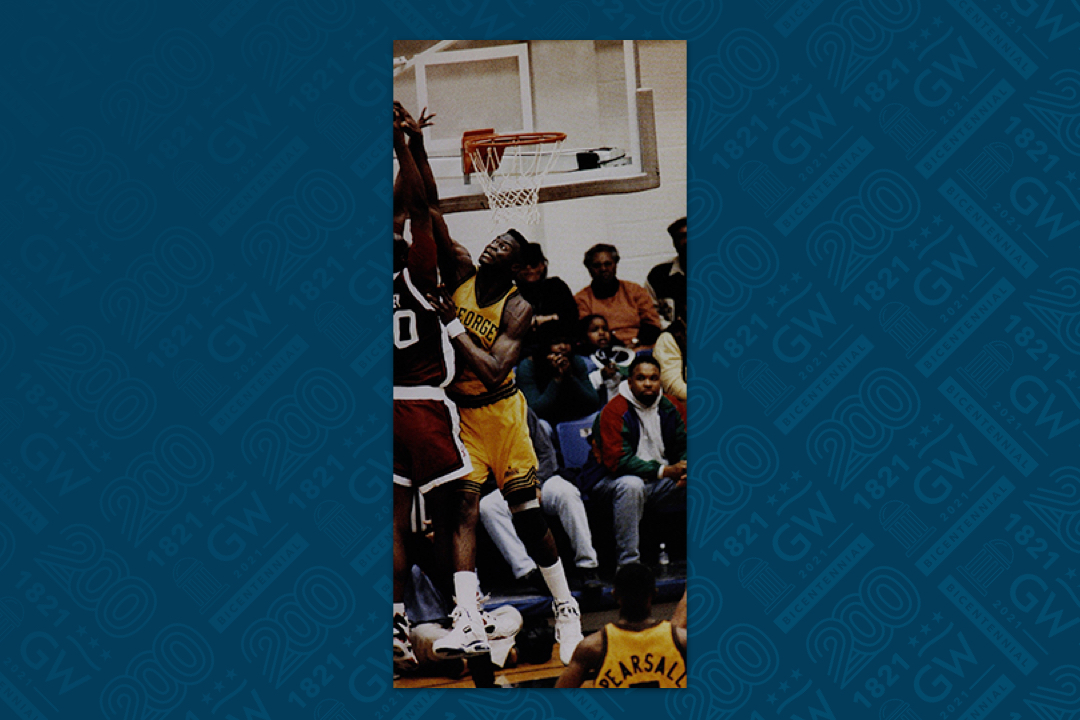 That ’93 men’s team was led by 7-foot-1 Nigerian-born first-year center Yinka Dare, who would be drafted 14th overall by the NBA’s New Jersey Nets the following year. 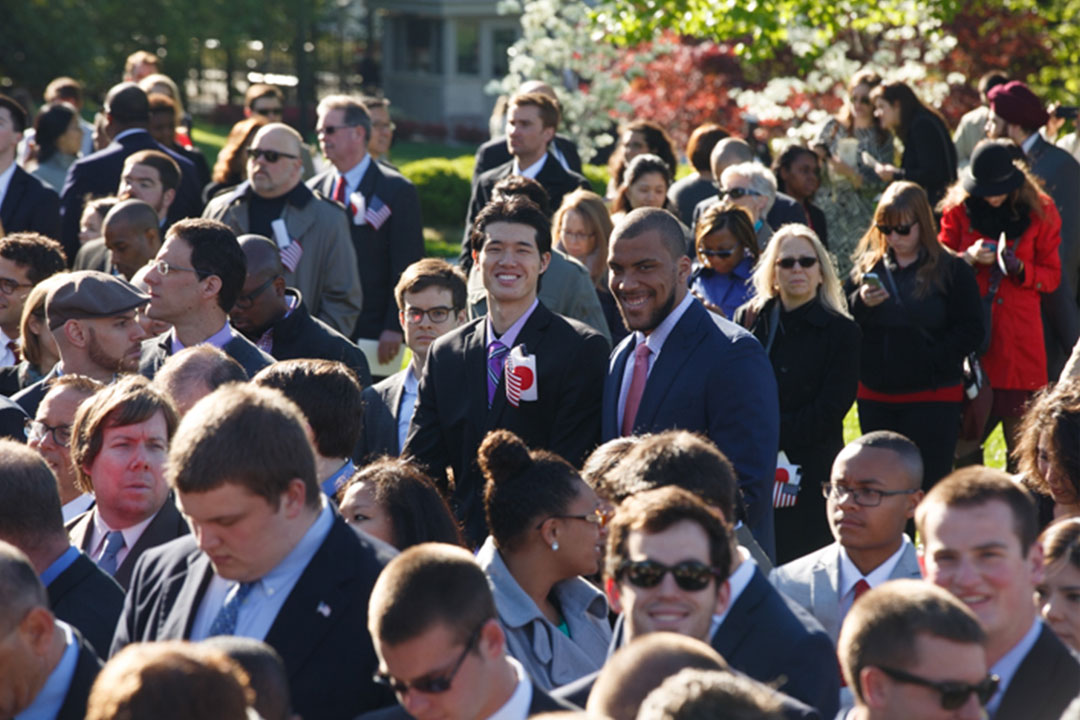 Yuta Watanabe, B.A. ’18, now with the Toronto Raptors, was just the second player of Japanese descent to play in the NBA. Here, he and fellow basketball teammate Kevin Larsen , B.A. ’16, loom large above a crowd honoring Japanese Prime Minister Shinzo Abe at the White House in 2015. 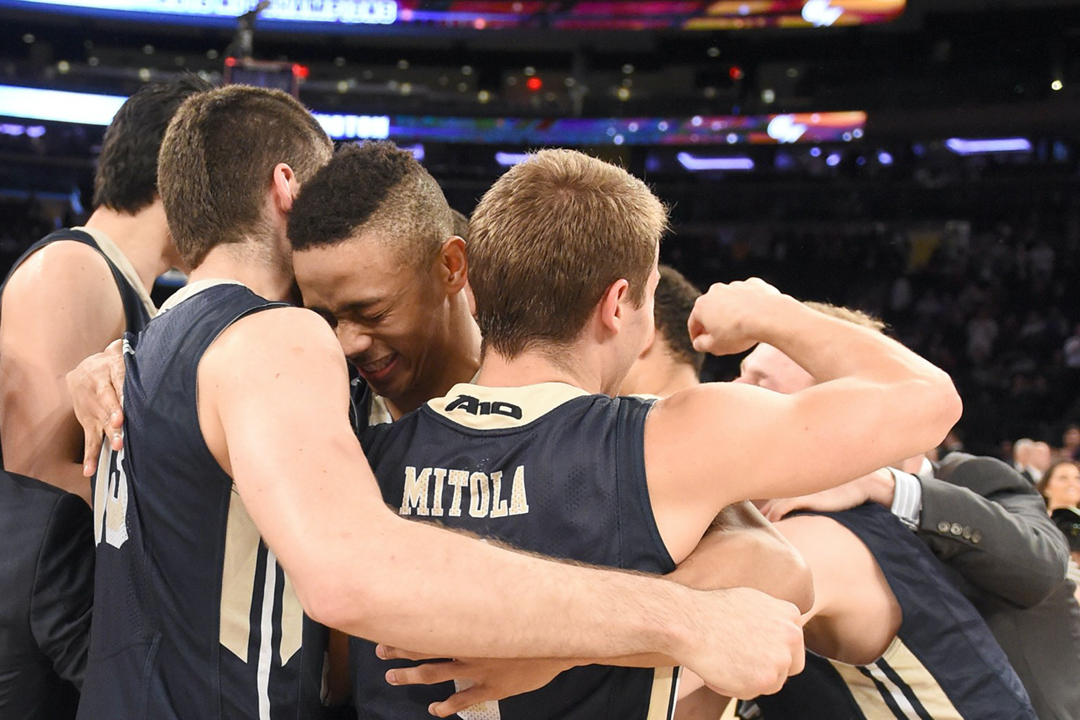 On the National Stage 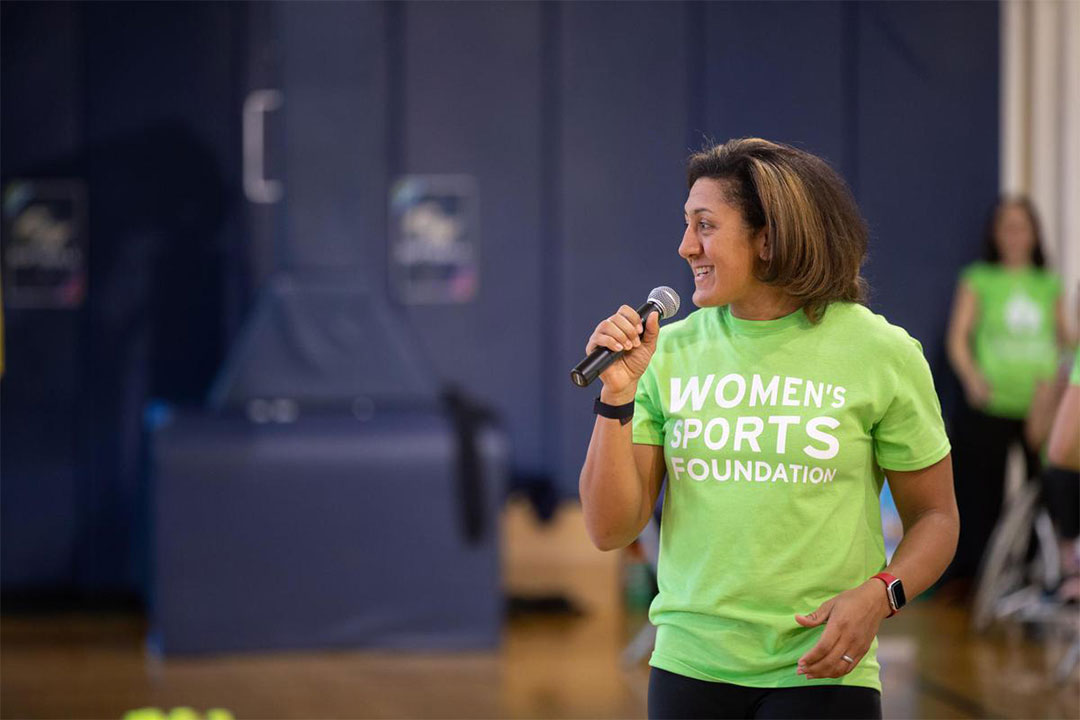 GW students don’t just visit and study the Olympics; they compete in them. The university has produced some notable Olympians, most recently Elana Meyers Taylor, B.S. ’06, M.T.A. ’11, HON ’18, who has two silver medals and one bronze in women’s bobsledding.

Several GW alumni have broken racial barriers in their Olympic sports, notably at the 2004 Summer Olympics in Athens. Katura Horton-Perinchief, M.P.H. ’06, M.B.A ’13, who would transfer to GW the following year, represented her native Bermuda as the first Black woman to compete in Olympic diving. Aquil Abdullah, B.A. ’96—who in 1996 became the first African-American man to win a rowing championship—at Athens was the first African-American Olympian to compete in that sport.