On Sunday, May 16, the George Washington University will graduate its class of 2021 under unprecedented circumstances necessitated by the COVID-19 pandemic. But this certainly isn’t the first change Commencement has undergone since Columbian College, which would eventually become GW, held its first one in 1824.

For one thing, the crowd was much smaller. While almost 10,000 students will receive diplomas this year, the class of 1824 comprised just three members. And they were all featured speakers—as were several sophomore and junior students. Topics included “Responsibilities of American Youth,” “The Influence of Mathematics on the Mind” and “The Superiority of Grecian over Roman Literature.”

They gave these addresses before a distinguished audience that included soon-to-be President John Quincy Adams, a longtime college patron, and the guest of honor, visiting Revolutionary War hero the Marquis de Lafayette.

Members of the College wore these ribbons to commemorate Lafayette’s visit. (GW SCRC.) 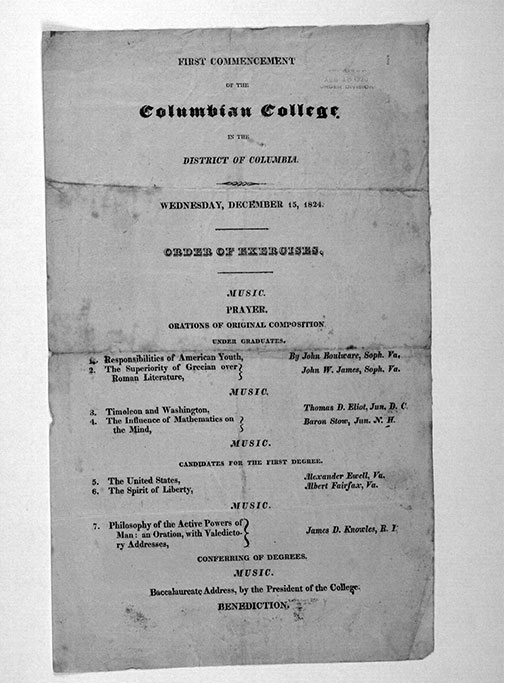 A program from the first Commencement. (Library of Congress.) 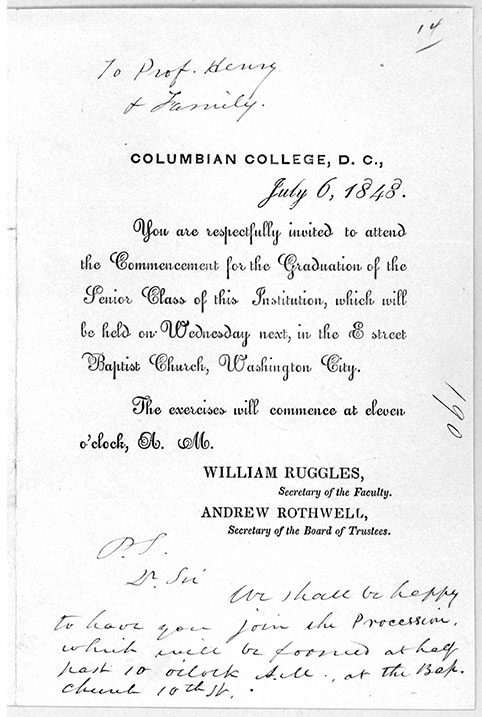 This invitation to the Commencement of 1848 was sent to a Professor Henry. (LOC)

The first Commencement received rave reviews. The Daily National Journal said it was “one which, in the opinion of competent judges, would have done honor to any of our older universities. Indeed it exceeded all expectations. Every part of the performance evinced talents and mental cultivation of a high order.” 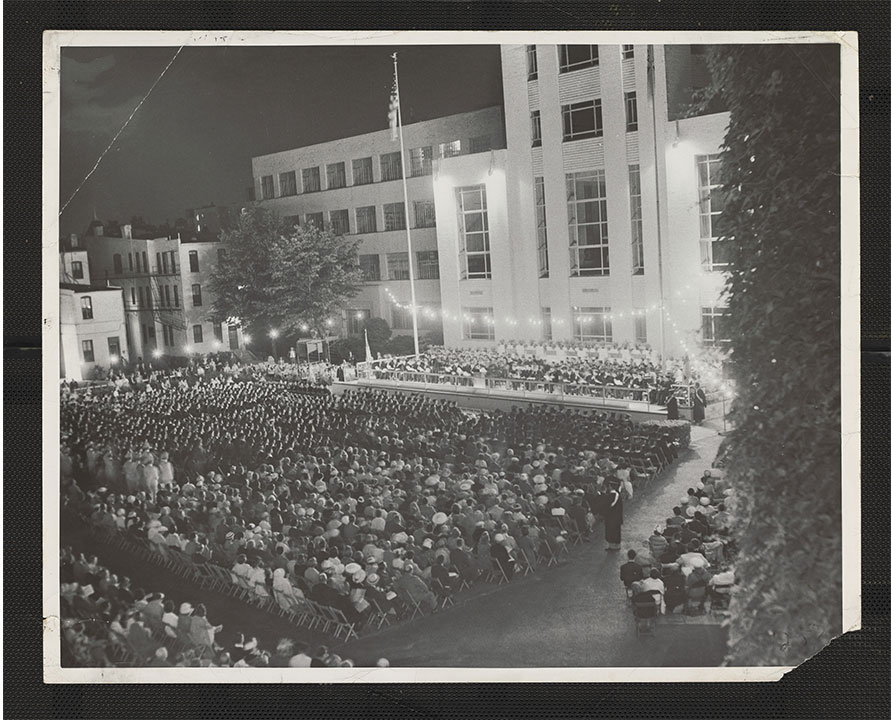 As Columbian College grew, so did its Commencement ceremonies and those of the individual schools it contained. The first modern Commencements—outdoor ceremonies at which the whole university community gathered—took place in the 1890s. These all-university gatherings would be held sporadically from then in a variety of outdoor and indoor locations, including D.A.R. Constitution Hall and the National Theatre. Then, as now, individual schools held their own on-campus celebrations.

Final lines of an address by Herbert Putnam, Librarian of Congress, at Columbian’s Department of Arts and Sciences Commencement in 1903. (GW SCRC)

During the university’s first century, Commencement speakers were often educators or educational administrators but were sometimes guests from the worlds of politics or diplomacy. The Librarian of Congress spoke in 1903, British Ambassador Auckland Campbell Geddes spoke in 1920 and French Ambassador J. J. Jusserand spoke at the Centennial of the first Commencement in 1924. 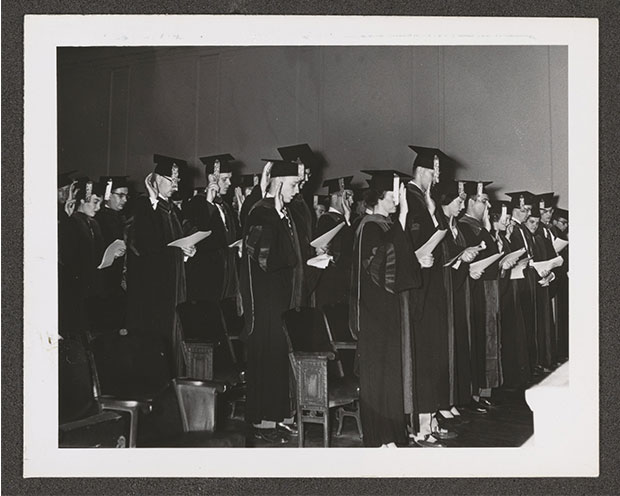 Not all speakers avoided controversy. In 1887, the National Medical College—now GW’s School of Medicine and Health Sciences—graduated its first female doctor, Clara Bliss-Hinds. At the Commencement, philosopher Elliott Coues delivered an impassioned speech on women’s rights, “A Woman in the Case.” The address was controversial enough at the time that the school chose not to publish it, but Coues published it himself. Walt Whitman had a copy, now among his possessions held in the Library of Congress.

Several American presidents have attended Commencements over GW’s 200-year history besides John Quincy Adams in 1824. Franklin Pierce and most of his cabinet were known to be in the audience in 1853, for instance. Some came as proud family members: In 1946, President Harry S. Truman received an honorary degree as his daughter Margaret graduated with her B.A. in history.

The Trumans were not the only First Family to step out of the audience and onto the Commencement stage. Then-First Lady Hillary Rodham Clinton was Commencement speaker in 1994; the late George H. W. Bush and his wife Barbara Bush spoke in 2006; and then-First Lady Michelle Obama delivered the address in 2010.  They all also received honorary degrees. 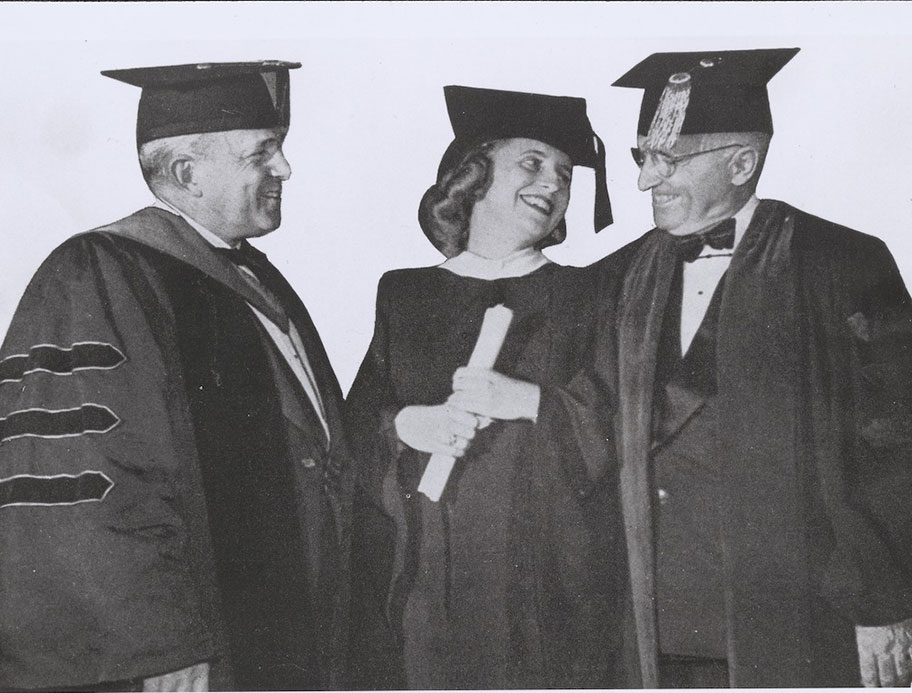 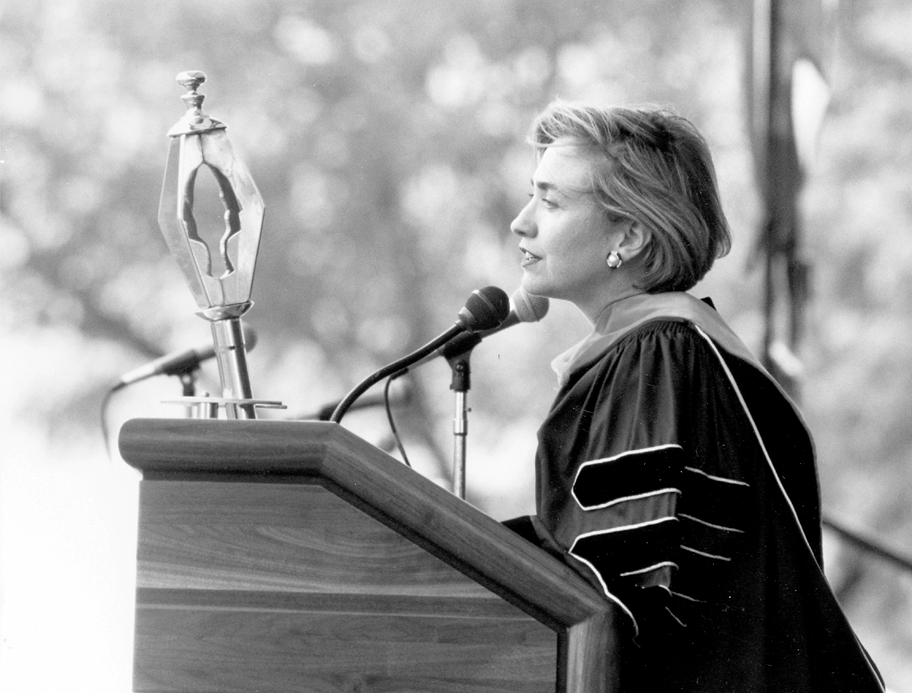 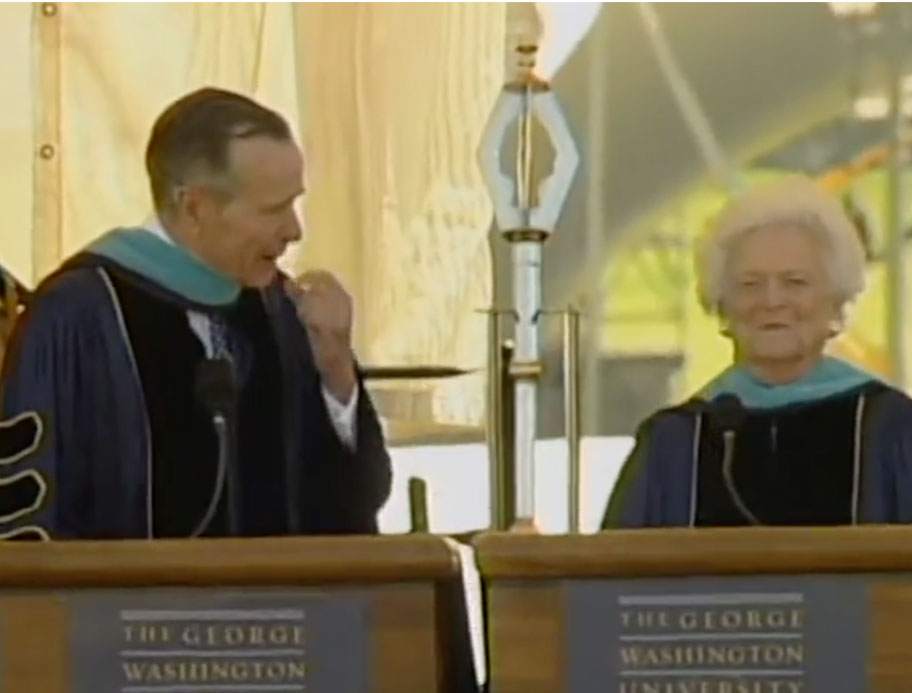 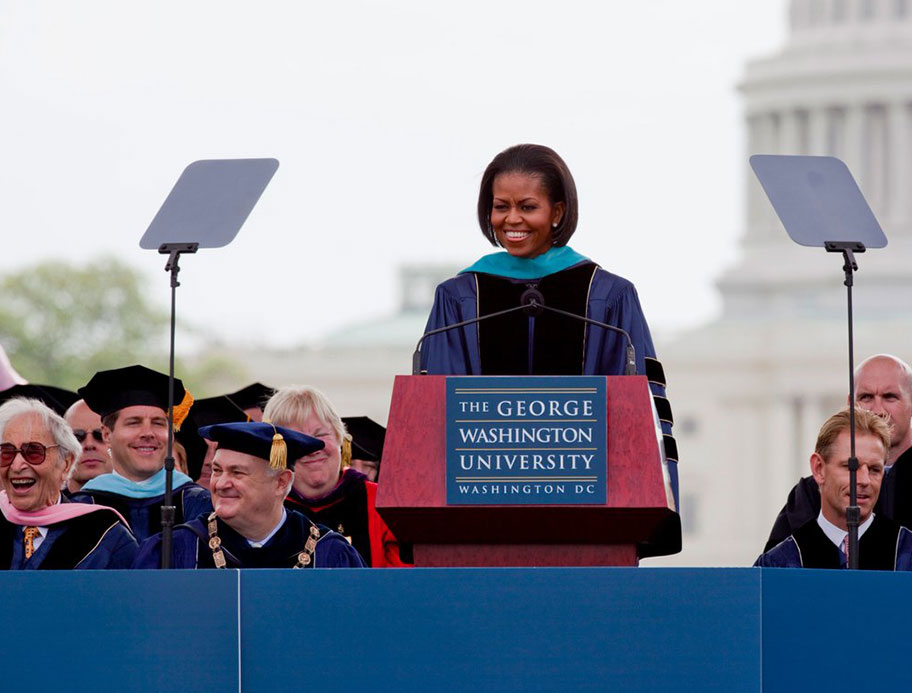 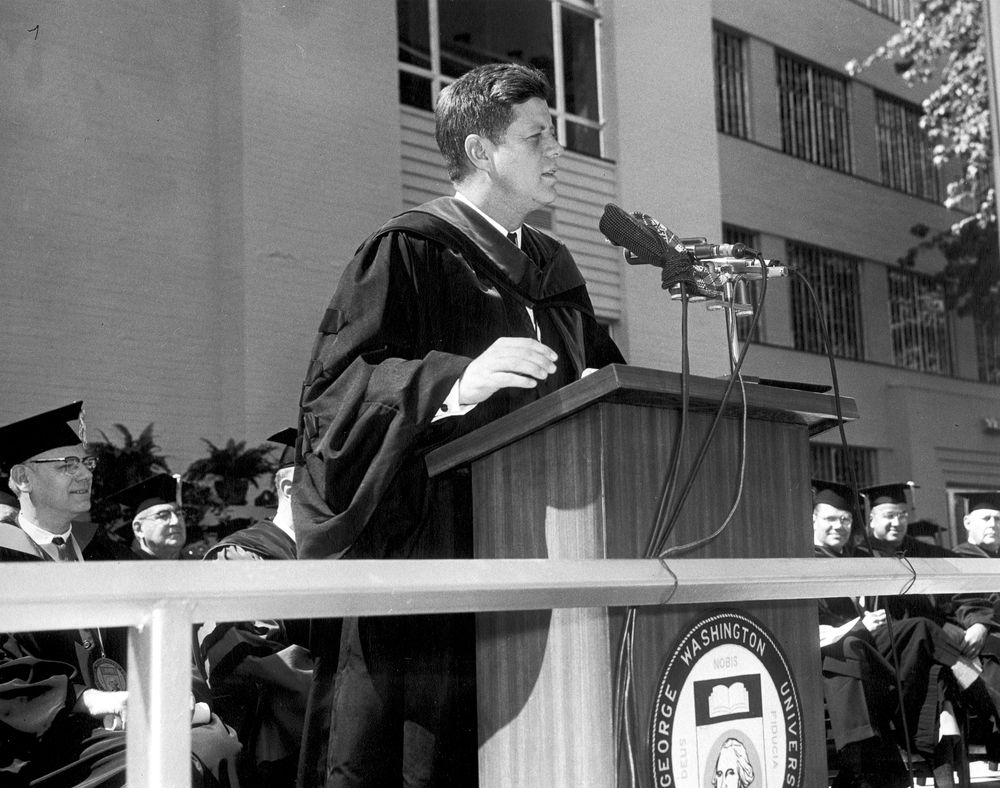 GW began holding outdoor Commencements in 1992. These took place on the Ellipse, the park south of the White House and north of Constitution Avenue and the National Mall, until ceremonies were moved to the National Mall in 2005. 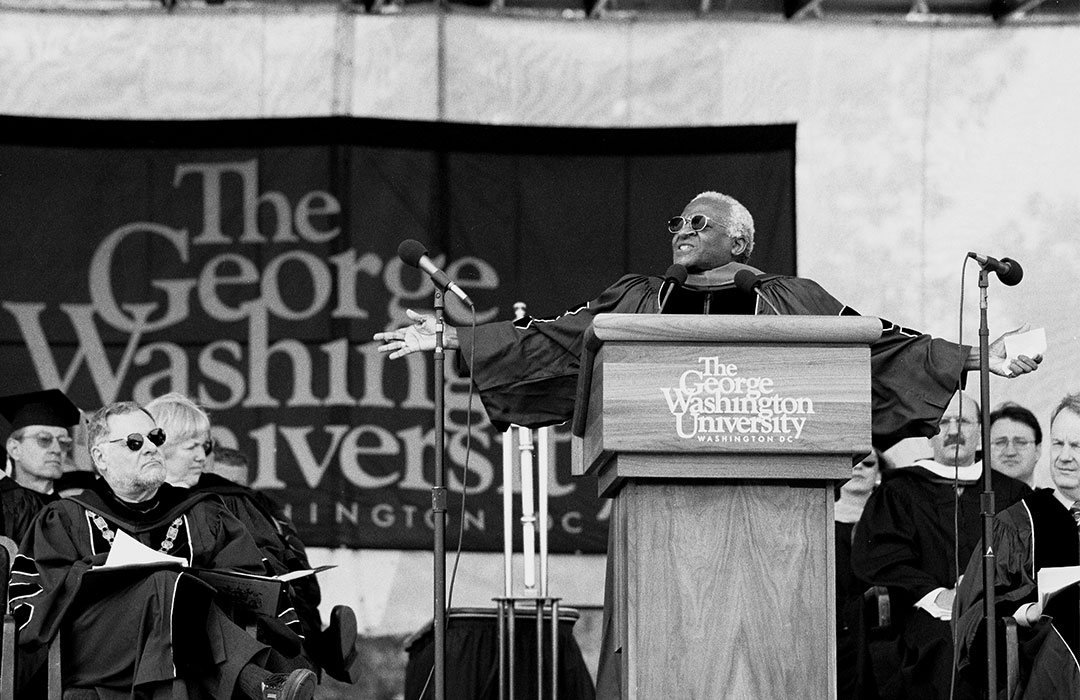 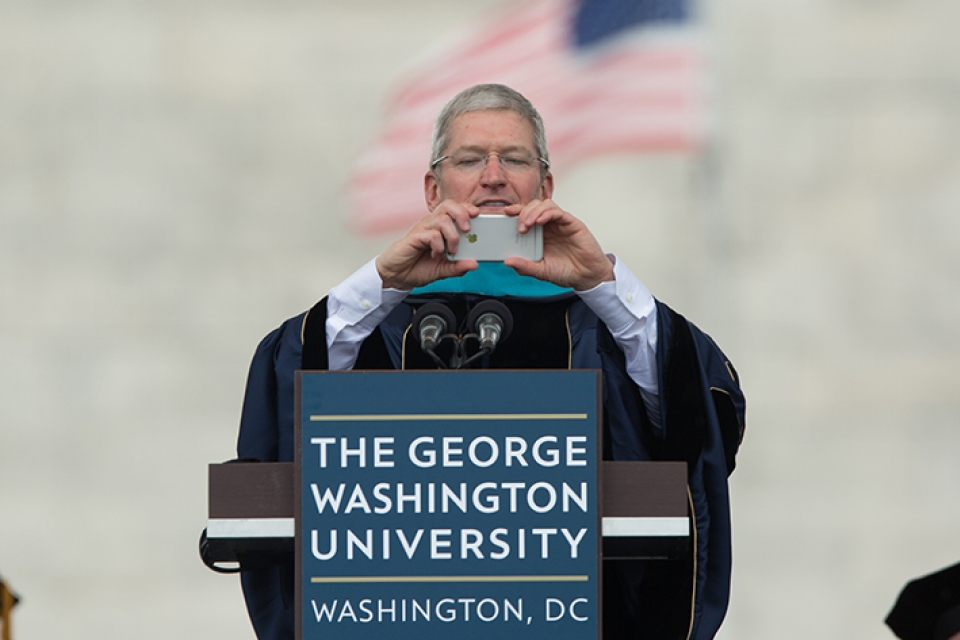 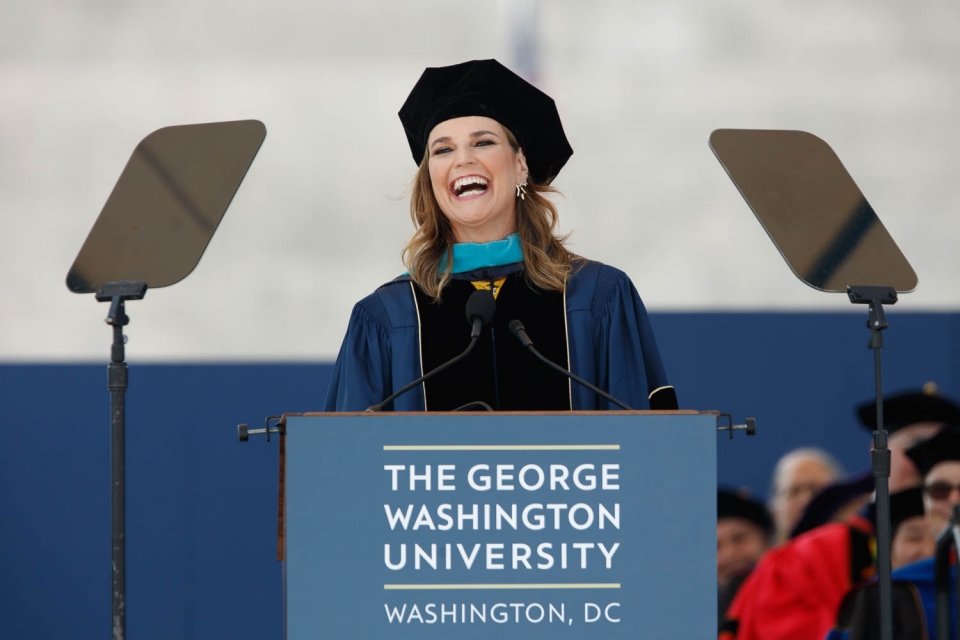 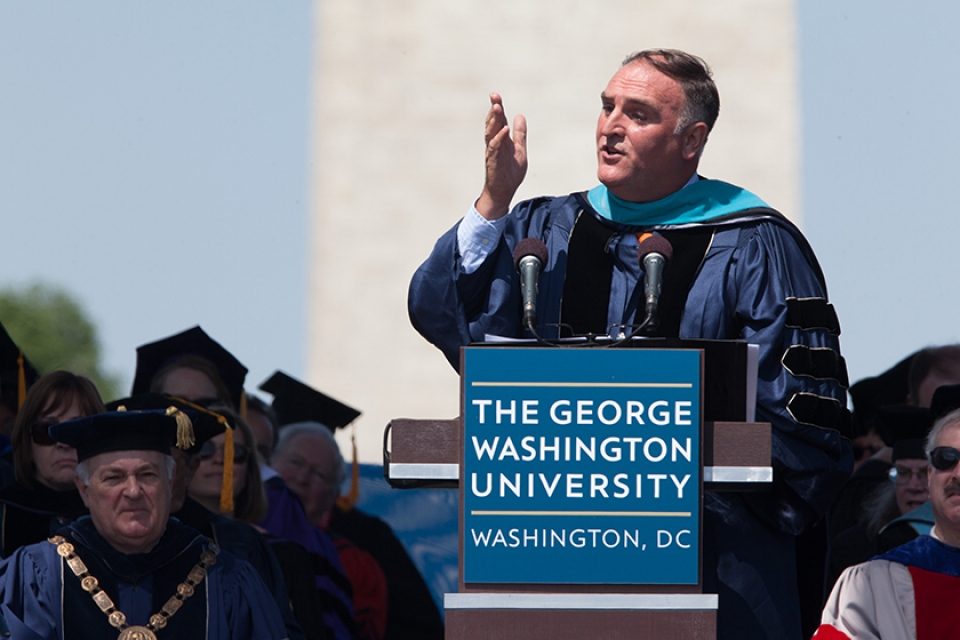 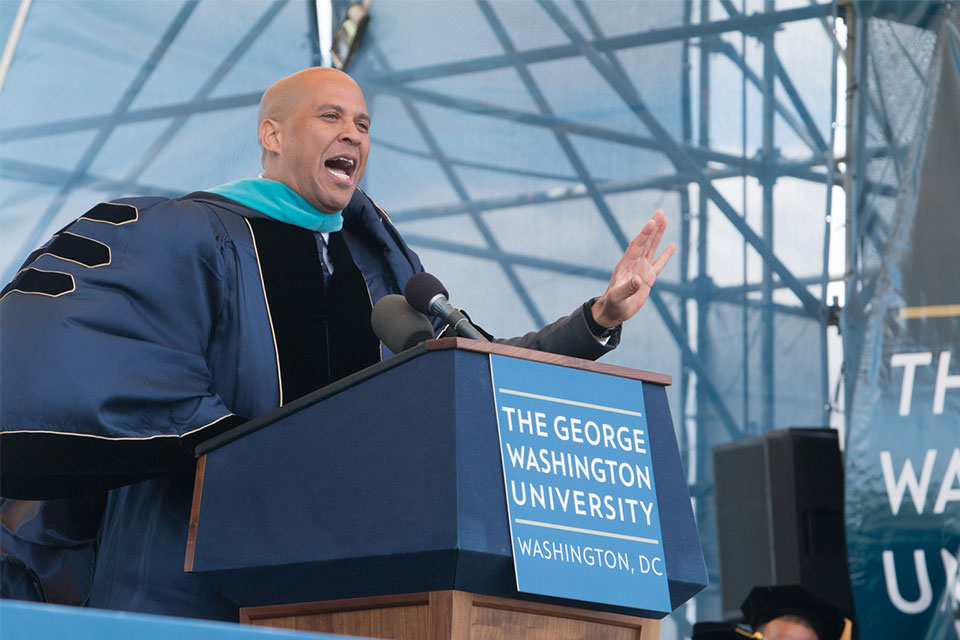