Alumni, faculty and staff who were on campus in 2001 recall a day that changed everything.

On Sept. 11, 2001, attackers flew three hijacked planes into the World Trade Center and the Pentagon. A fourth crashed into a field in Shanksville, Pa.

When American Airlines Flight 77 crashed into the west side of the Pentagon, buildings shook on the George Washington University’s Foggy Bottom campus. The pillar of smoke rising from the crash was visible from residence halls. As communal televisions showed the unthinkable and overloaded phone lines made communication with loved ones difficult or impossible, GW Hospital professionals readied to care for survivors. The Cherry Tree yearbook devoted four pages to that single day, ending with a page that simply reads: Nothing will ever be the same. 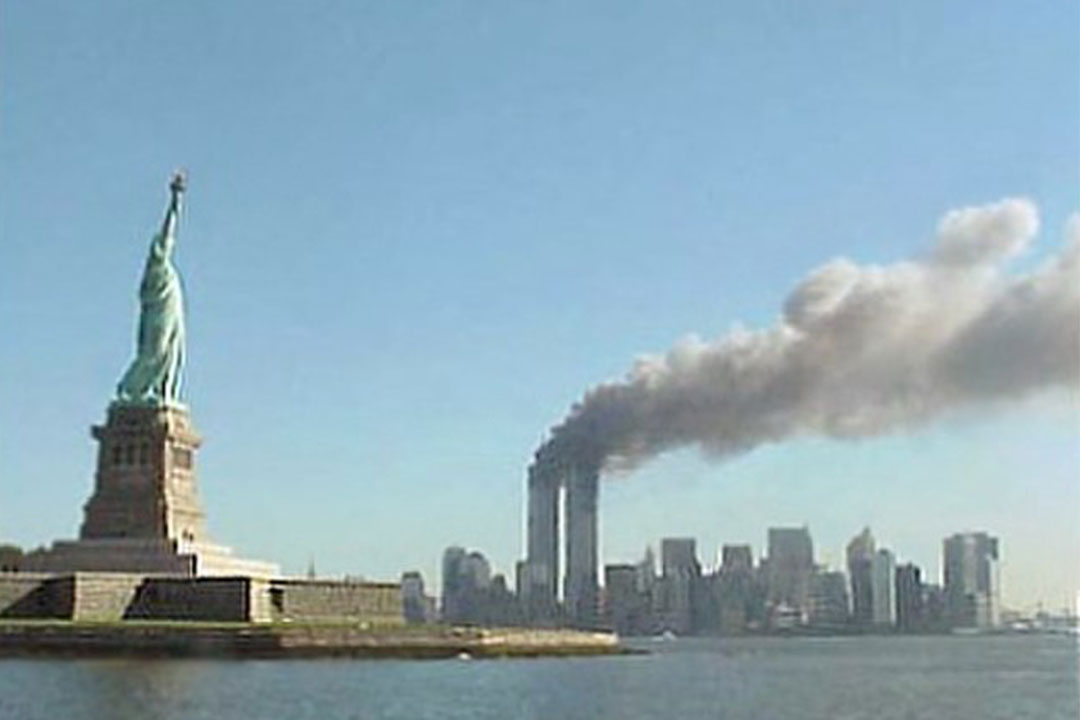 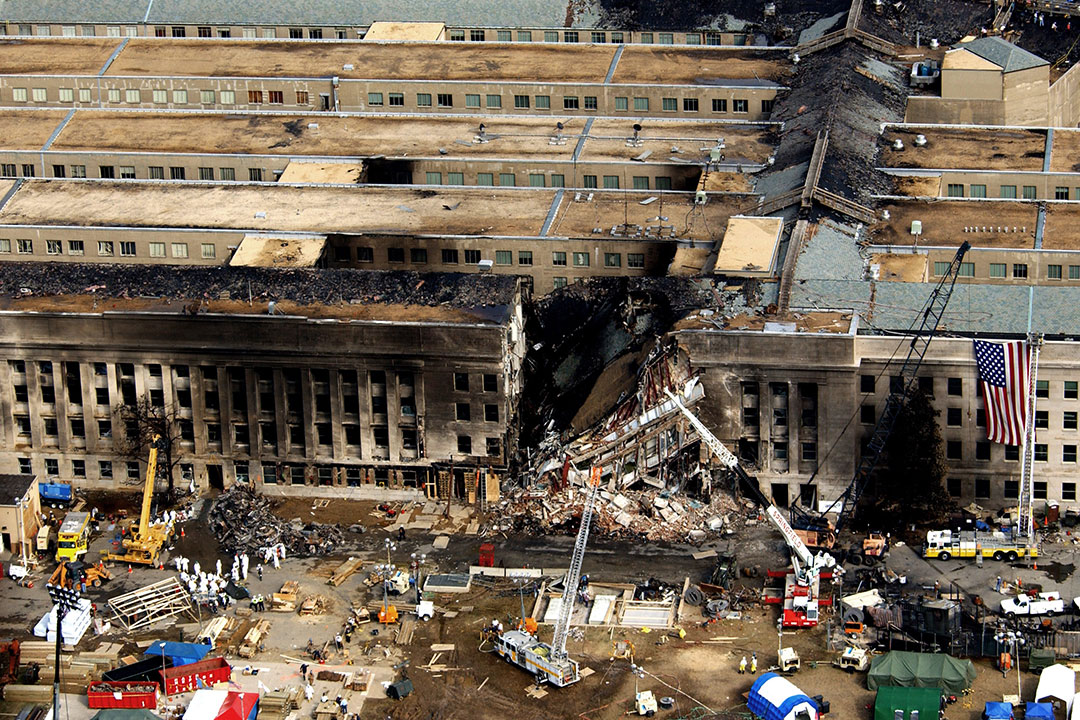 My memory of 9/11 is crystal clear. I walked into the emergency medicine department that morning and a staff member told me that someone flew an airplane into one of the twin towers. My immediate reaction was disbelief—no one would do that. A few minutes later the second plane struck. I ran to the GW Hospital emergency department where they had just heard news of the attack. The anxiety and fear were palpable, but there was also a determination to snap onto action, to do whatever we needed to do to support our country and our community.

When the third plane struck the Pentagon we all took a deep breath and began to prepare to receive victims. I can still see the IV bags and poles hanging in each room, everyone dressed in trauma gowns, caps, gloves and masks. So many calls came in from surrounding emergency departments, as far away as Pennsylvania, offering to help. Hundreds of providers came to the department offering assistance. We stood by, waiting, mostly in silence, trying to understand what happened, to put it in some context. Trying to understand our world.

It was just a couple weeks into my sophomore year at GW and like many students, I was preparing for my first congressional internship. On the morning of 9/11, I arrived on Capitol Hill bright and early to start the first day working for my home state Sen. Richard Durbin (D-Ill.). Less than one hour in, we were running down the hallways and evacuating the complex. Hijacked planes had already hit the Twin Towers in New York City, with another plane hitting the Pentagon, and we were alerted one was headed to the Capitol.

Back on campus, cellphones and landlines were not operational, and I communicated with friends and family via AOL Instant Messenger. The first call that successfully came through later that day carried urgency. “Where are you?” It was a colleague at The GW Hatchet, where I was a junior news editor. It clicked. I needed to be out reporting. I grabbed a pen, a notebook and hit the streets of D.C. to chronicle the story of the century and haven't stopped reporting since. 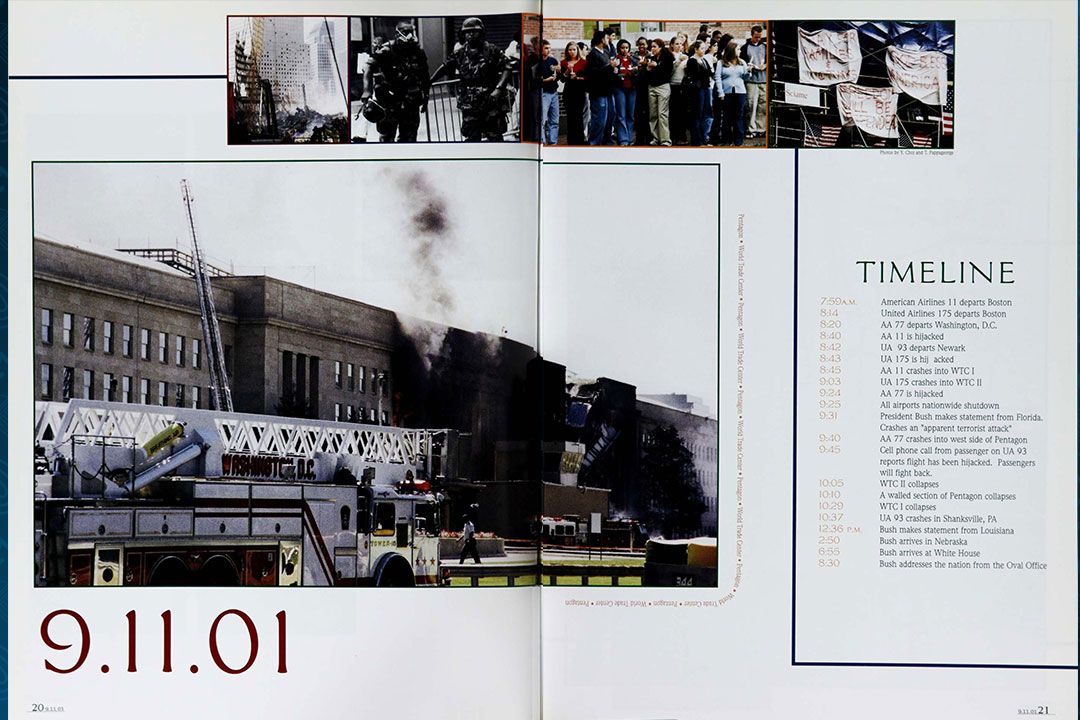 We were all huddled in the TKE fraternity house, making sure everyone was accounted for, glued to the TV in our front room. We were scared, confused, sad and angry all at once.  So much was unknown. When the secondary explosion went off at the Pentagon, the force of the blast literally shook the house. Our concern grew as it was initially reported as a possible car bomb at the State Department. Luckily it wasn't. We went to the roof and were able to see the smoke billowing from the Pentagon. I'll never forget that sight, that day, or bringing coffee to all the soldiers stationed on the street corners in their Hummers during those cold nights in the weeks thereafter.  Our lives were forever changed. 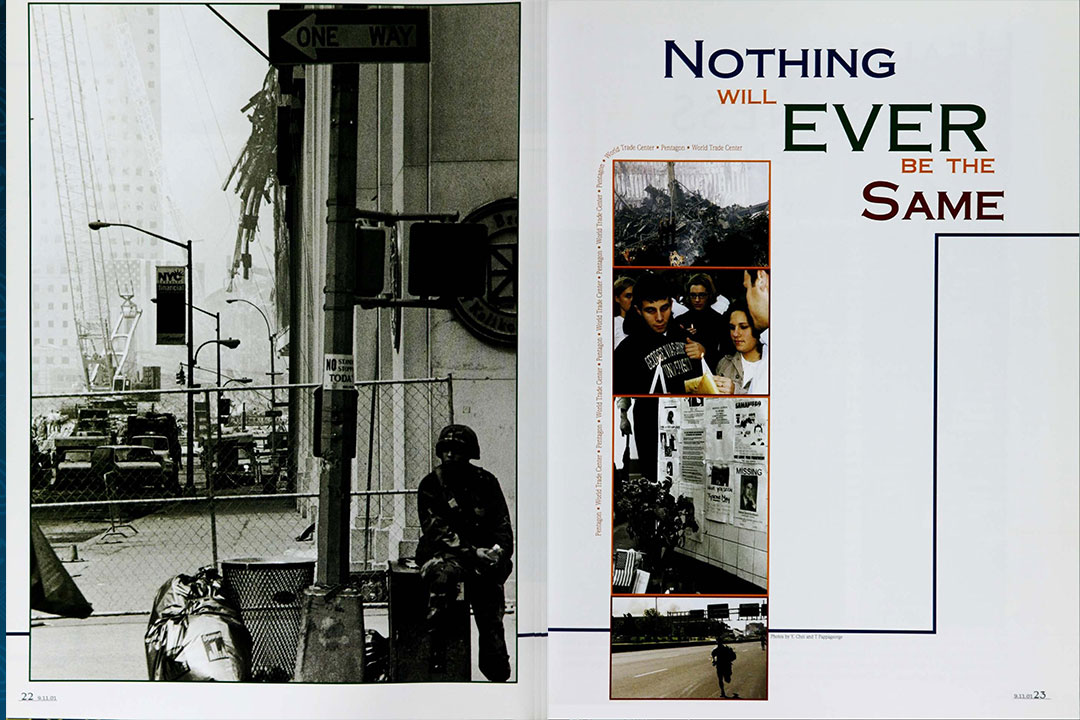 I was teaching a seminar on G Street. The class started at 9:35 in the morning, and American Airlines Flight 77 crashed into the Pentagon two minutes later. The weather was beautiful, warm and sunny, and all the windows were open. A student said she heard an explosion in the distance.

I turned on the television in the seminar room and then quickly canceled class. My daughter was in first grade in Alexandria. We could not reach the school by phone, and the roads from D.C. to Northern Virginia were either jammed or closed. Another parent brought her home. The next day, on campus, everyone looked like deer in the headlights. No one knew what to say.

I woke up like normal to head to Funger Hall for my morning statistics class. I remember sitting in class when we heard that not one plane, but two had hit the World Trade Center. At the time, we had no idea of the size of the planes. I remember someone in the class asking about the probability of two planes crashing at the same location—a fitting question for a stats class. My heart was pounding: My dad was on a plane headed to D.C. that morning from LaGuardia.

I cannot remember if class let out early, but I remember sitting in my room in Dakota Hall watching the coverage and not being able to get anyone on the phone (all phone lines were busy). Thankfully, I was able to get on AOL Instant Messenger to talk to others, including my mom who said she was in touch with my dad and he was OK. It turned out his plane never took off. He just sat on the runway while the news broke. 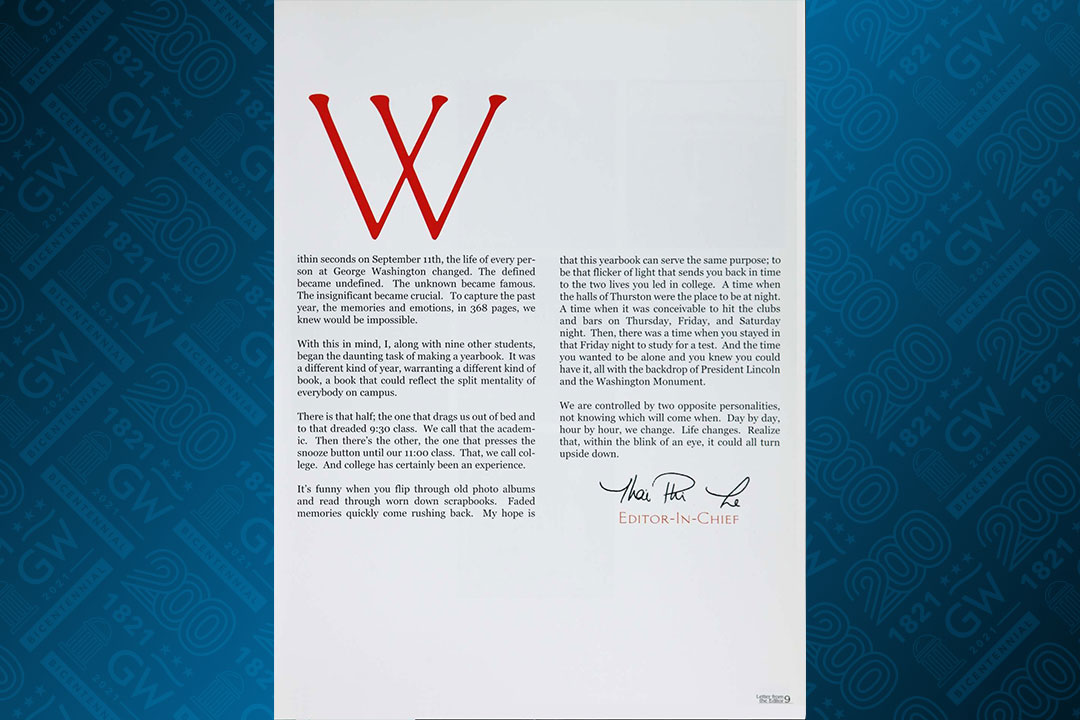 I had back-to-back early morning writing classes on 9/11. That morning, a student from the later class told me about an attack in New York, where his mother worked. Soon after, a colleague said she was canceling class because of an attack at the Pentagon.

I tried to reach my husband who works at Smithsonian's American History Museum. The streets were gridlocked, so a colleague lent me money for the Metro. Heading into Maryland, I saw smoke coming from the Pentagon. My fellow riders were silent and tense. One person was crying.

After all these years, recalling these events brings tears to my eyes. It was a frightening time, both the events of the day and the realization soon after that the U.S. would respond with military force to the attacks.

I was a sophomore recovering from a severe ankle fracture in my residence hall on the Mount Vernon Campus. I will always remember vividly the feeling of helplessness and vulnerability, not just physically (due to my injury), but also emotionally as I could not fathom how this could be happening nor could I actively help friends and family who were unaccounted for in the early hours of the attack. The events of that day shaped many of my personal and professional interests in emergency management and continuity of operations. 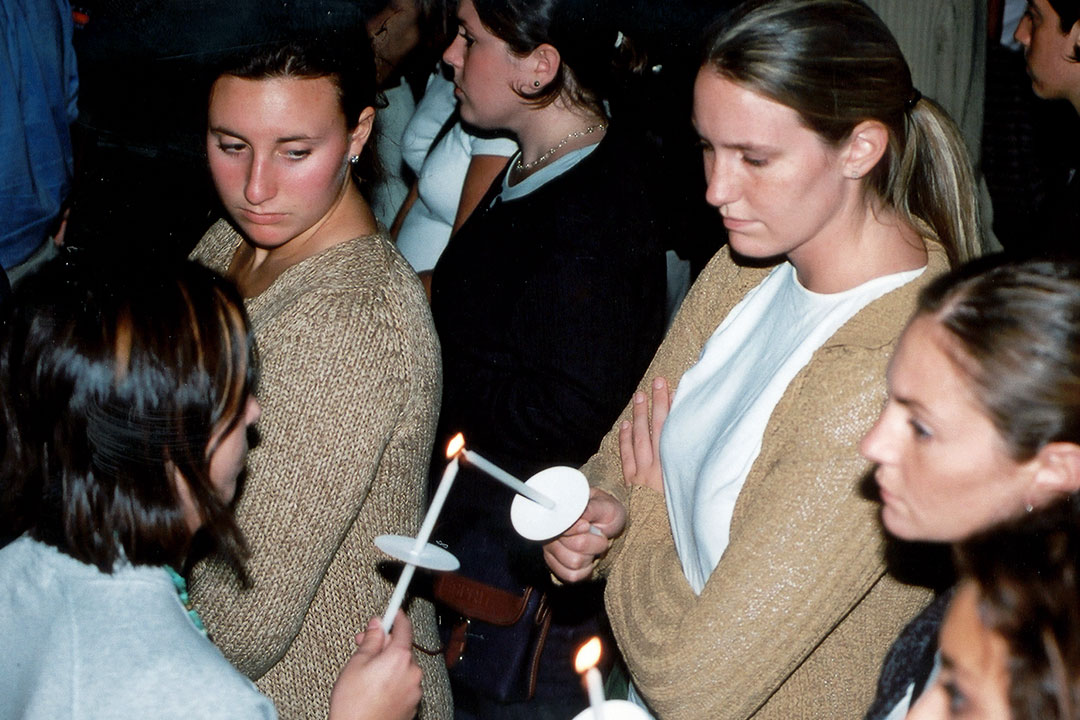 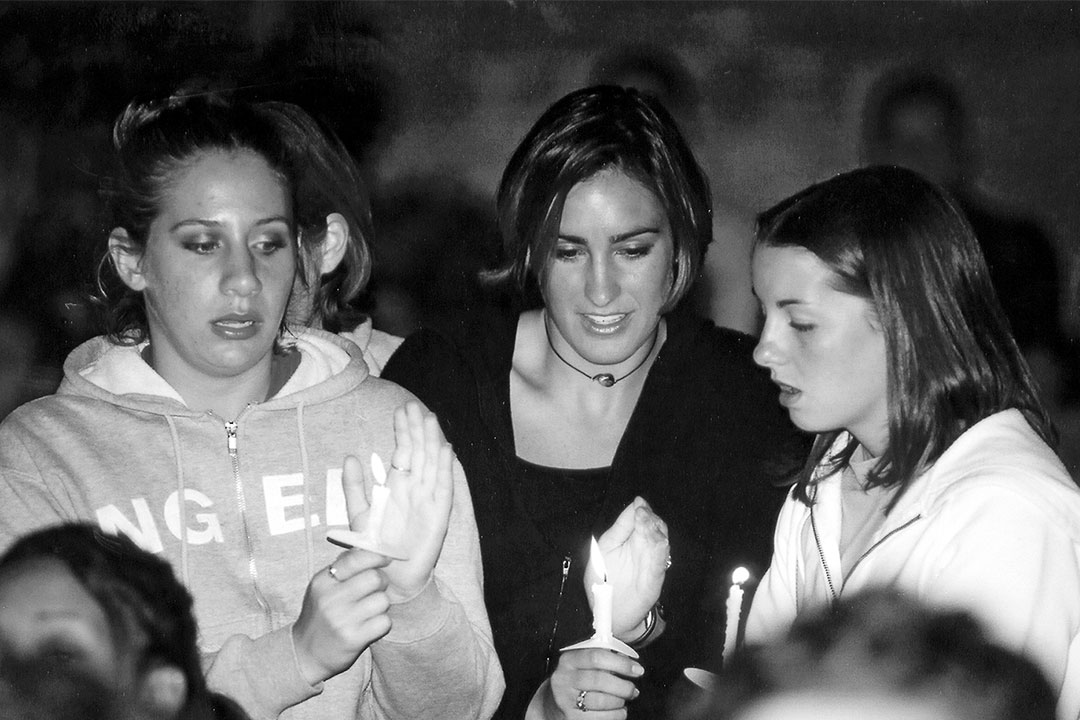 Students attend a candlelight vigil a few days after the attacks. (GW/Thomas Kohout)

Sept. 11, 2001, was the date of my first real class lecture in my first semester at GW. That morning, I was at home preparing the lecture when I heard on the radio that the first plane had crashed into the World Trade Center. At some point later that morning, all classes were cancelled.

When I returned to campus on Sept. 13, the streets in downtown D.C. were eerily quiet. Despite the perfect weather that day, the campus green spaces were conspicuously empty. There were military vehicles on Pennsylvania Avenue near Washington Circle and security personnel in combat gear on and around campus. Students were clearly distracted, and so was I. We didn’t have mobile internet access in those days, so none of us wanted to be away from the TV. It was virtually impossible to focus on anything else for the rest of that year, and nothing was ever the same.

Vanessa Perry
Professor of Marketing, Strategic Management and Public Policy and special adviser to the dean’s office in the School of Business

On Sept. 11, 2001, I was working as the web services coordinator for the Student Academic Support Services (SASS) division and my office was in Rice Hall. I'd arrived to work around 8:30 and was having coffee and getting my day started when my supervisor, Alexa Kim, rushed in to ask if I'd heard what happened. I tried pulling up CNN.com but it wouldn’t load (which was itself rather alarming).

At that time Rice Hall had a TV in the lobby, so we went downstairs to see what was happening. A small crowd had gathered, and we all watched in horror as the plane hit the second building. As soon as that happened, Alexa said something to the effect of, “Go home, get in touch with your family as soon as you can.” I remember thinking it was such a beautiful day as I walked back to my apartment in Dupont Circle.

I remember being in my room in Clark Hall my first year at GW, making oatmeal in the microwave and watching the morning news. All of a sudden video footage flashed up of the World Trade Center with smoke billowing out one of the buildings. As the reporters tried to make sense of what was happening, the second plane hit. I struggled to interpret the gravity of what was unfolding. Was this some kind of awful joke?

I continued getting ready for class, only slowly realizing what was happening. Class was cancelled. Over the next hour, a frantic buzz set in around the halls and across campus. I tried to call my dad who worked in the city but couldn’t get through. With each call I tried to make, the panic within me was building. Finally managed to get through to a friend in Boston who relayed messages via text between me and my family.

The Pentagon was now hit. Students ran through campus to the site to see it firsthand. Others were shaken to the core. I remember welcoming friends to my room to comfort each other and distract myself from my own fears. It felt like the world around me was all of a sudden in slow motion.

My memories are like white noise for the weeks after. Armed military guards on every corner. Classes eventually proceeded with brave classmates who tried to get through statistics without breaking down over the loss of a loved one. It was a heartbreaking time. 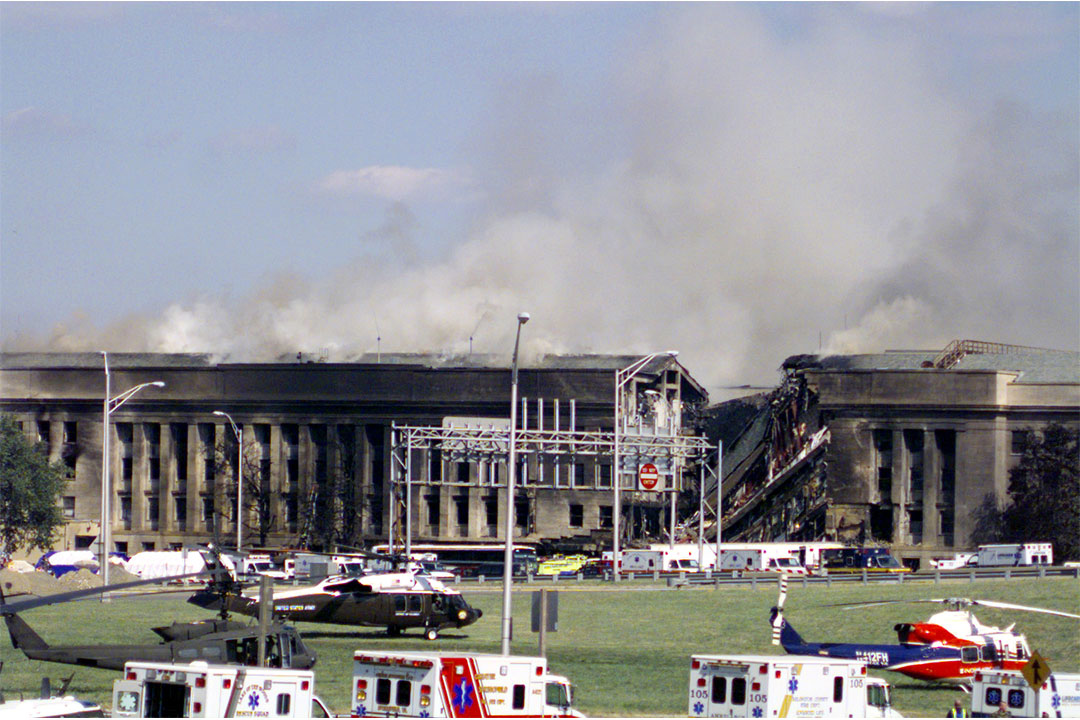 The destroyed southwest corner of the Pentagon. (U.S. Navy)