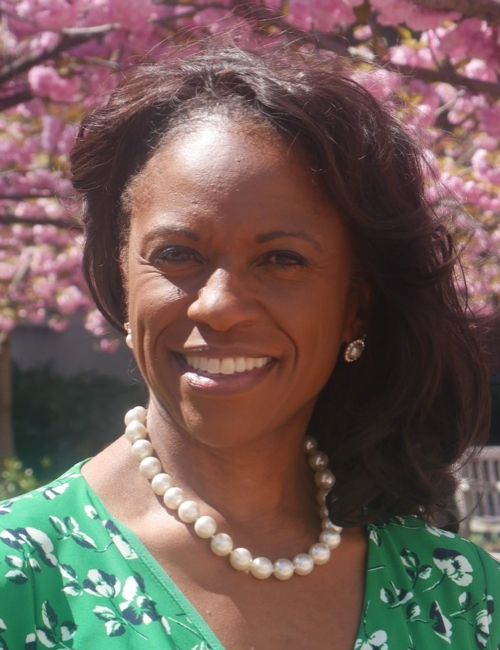 Monumental Achievement: Combining her journalism experience and the military background of her family—her father was an original member of the Tuskegee Airmen—Traci Scott served as senior adviser for strategic communication at the U.S. Department of Veterans Affairs. Earlier in her career, she was regional liaison officer for the U.S. Army's 1st Infantry Division at Fort Riley, Kansas. She has been recognized for her service to the Afghanistan Reconstruction, operations in Baghdad, and the U.S. Department of Defense. A 2015 Presidential Leadership Scholar, Scott founded the Green Dress Project which empowers young girls from underserved communities to transition into and maintain integrity in a professional environment.

"My education at The Graduate School of Political Management at GW empowered me with the tools I needed to navigate the rough and tumble politics of Capitol Hill, the military maze of the Pentagon, and the unpredictability of the war zones of Iraq and Afghanistan. Whether it was how to anticipate the tough question during a mock interview in a strategic communications class or how to employ a tactic from a top campaign manager, the practical skills taught at the GSPM were useful to me and I applied them to help me thrive and succeed in some of the most chaotic of environments."

Traci Scott was only 16 years old when she started her broadcasting career with the Far East Network (FEN) in Japan. Since then, her career path has taken her from CBS News, Capitol Hill and the Pentagon to war zones in Iraq and Afghanistan. Most recently, she has served as a key advisor to more than a dozen Army generals and a cabinet secretary.

Her career highlights include covering: presidential campaigns & inaugurals; a devastating hurricane alongside Dan Rather; the trial of former D.C. Mayor Marion Barry; and multiple stories on the glitz, glamour and intrigue of the Las Vegas strip. She later decided to transition out of broadcasting, moving to Congress where she first launched a communications office for a freshman U.S. Senator and subsequently generated a similar effort for an up-and-coming political candidate.

In 2003, her love of country inspired her to go to Iraq, where she served as a civilian press officer for the Coalition Provisional Authority. Later, she was chosen to stand up the press office for the special inspector general for Afghanistan.

Scott attributes her best education outside of the classroom to the time that she worked as an advisor to 16 Army generals over a period of nine years. She calculates that about every 10 months a new deployment was underway, bringing in another general to take command. Each time she provided sound counsel and successfully gained their trust.

Although Scott has never served in uniform, her family has a notable history, with three generations of military service. Her father, Captain Jesse Scott, was a Tuskegee Airman; her grandfather served as a Merchant Marine; her stepfather is a retired Air Force Master Sergeant; and her nephew currently serves in the Air Force Reserves.

In 2015, Scott was one of 60 leaders chosen from 1000+ applicants to participate in the first Presidential Leadership Scholars class. This prestigious program was founded by Presidents George W. Bush and Bill Clinton. Those lessons in leadership led her to create and develop a non-profit, The Green Dress Project, which mentors and prepares young women from underserved communities, for their future careers.

Scott was among the first to earn a master’s degree from the Graduate School of Political Management when it merged with the George Washington University in 1996. She graduated from Howard University with a degree in broadcast journalism in 1987.