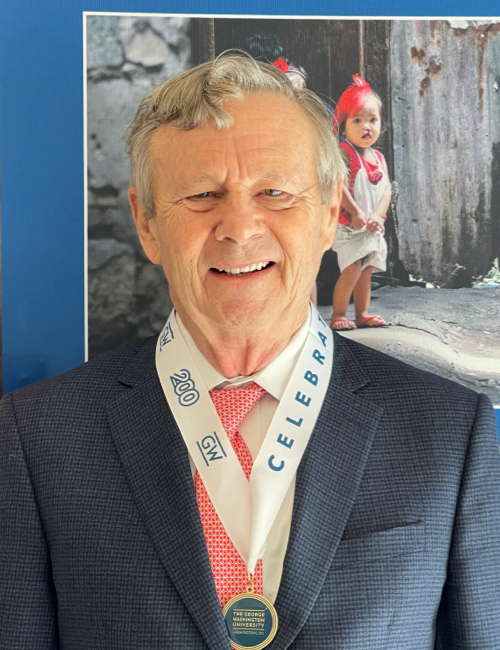 Monumental Achievement: Children throughout the world have happier smiles on their faces thanks to the vision and commitment of plastic and craniofacial surgeon William P. Magee, Jr. Together with his wife Kathleen, a nurse and clinical social worker, Magee is the co-founder of Operation Smile and currently serves as its chief executive officer. Founded in 1982, Operation Smile is a worldwide medical nonprofit delivering safe, effective surgical care to children suffering from cleft lip, cleft palate, or other facial deformities. He has been recognized with the American Society of Plastic Surgeons’ Honorary Citation Award, the American Society of Maxillofacial Surgeons’ Tagliacozzi Award, U.S. News & World Report’s  “America’s Top Leaders,” the National Medal for Peace and Friendship Among Nations in Vietnam, and the Distinguished Service Award from the American Society of Plastic Surgeons.

"Graduating from George Washington University Medical School was one of the highlights of my life. It opened the road to my residencies and for my career in plastic and craniofacial surgery.

Those years also opened our minds to the global needs that existed in our world which ultimately led to founding of Operation Smile, Inc. with my wife, Kathleen, back in 1982. To date, we have addressed the comprehensive needs of over 300,000 children with cleft lip and cleft palate deformities. This has ultimately led to the development of a comprehensive care model involving surgery and several other subspecialties in over 40 underserved countries, allowing Operation Smile to be instrumental in education, research, and medical infrastructure development within those settings.

Dr. Skip Williams, an anesthesiologist and past dean of the Medical School at GW, was instrumental in our global medical development. Dr. Williams travelled with our team to innumerable countries helping to develop infrastructure, and without that medical infrastructure, Operation Smile would never be what it is today.

My pride in my medical education also opened the door for two of my sons and one of my sons-in-law to get their M.D.’s from GW and go on to their extremely successful medical careers.

Our family would not be the same if it had not been for GW."

William (Bill) P. Magee Jr., D.D.S., M.D., is a plastic and craniofacial surgeon who founded Operation Smile in 1982 with his wife, Kathleen S. Magee, and serves as the organization’s CEO.

Magee has trained and mentored thousands of physicians worldwide. A featured guest on many network television programs, Magee is also a sought after keynote speaker for corporate and national meetings. In July 2013, he gave one of the keynote addresses to the National Speakers Association (NSA) in Philadelphia.

Magee has been awarded honorary doctorates including from the Karolinska Institutet in Sweden in 2014. He was awarded the American Society of Plastic Surgeons’ Honorary Citation Award in 2014 and the American Society of Maxillofacial Surgeons’ Tagliacozzi Award in 2013. He was highlighted in U.S. News & World Report’s “America’s Top Leaders” in November 2009 and was given the National Medal for Peace and Friendship Among Nations in Vietnam in 2009. In 2007, UNICEF presented the Magees with a special recognition on behalf of Operation Smile and he received the Distinguished Service Award from the American Society of Plastic Surgeons.

He entered into Plastic Surgery Specialists, Inc. in Norfolk in 1978 and became president of the group, which at the time was the largest private training program in the United States. In 2016, he stepped away from the practice to invest all of his effort and energy into Operation Smile.