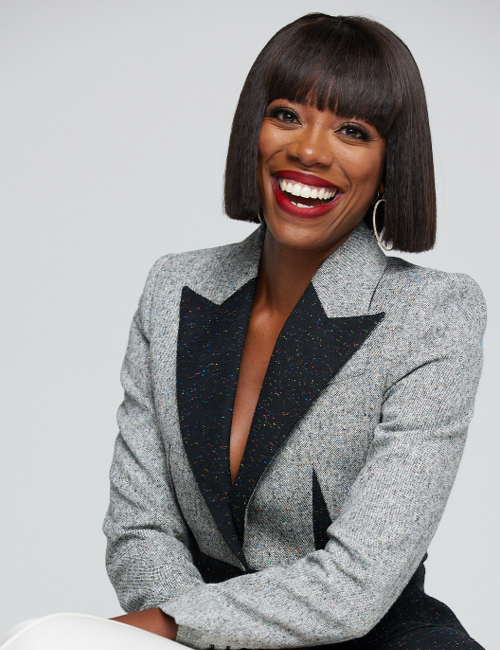 Monumental Achievement: Nigerian-American actress and comedian Yvonne Orji is best known for her role in the television series Insecure for which she has been nominated for a Primetime Emmy Award and three NAACP Image Awards. This year, she began development on First Gen, a series based on her personal life and produced by Oprah Winfrey and David Oyelowo. Dedicated to philanthropy, she has volunteered in Liberia, with Population Services International, an NGO that utilizes social marketing in the adoption of healthy behaviors. In Liberia, she helped develop a mentoring program and a weekly talk show to educate and prevent against teen pregnancy and HIV/AIDS. She also serves as an advocate as a R(ED) Ambassador and a Literacy Champion for Jumpstart and working with JetBlue for Good.

Yvonne Orji is an Emmy-nominated actress and proud GW alum. After earning her B.A. in liberal arts and her master's in public health at GW, she moved to New York City to pursue comedy. She then made her way to Los Angeles where she landed the lead role of Issa Rae's best friend and fan favorite "Molly" on the award winning HBO comedy series, Insecure.

In 2021, Orji produced and starred in her own one-hour stand-up special for HBO entitled Momma, I Made It. It was shot in the two places Yvonne called home while growing up, Washington D.C. and Nigeria. Prior to the taping, she embarked on a domestic tour which included sold-out shows in New York and Los Angeles. She has opened for Chris Rock in a number of venues across the country including Madison Square Garden and the Barclays.

Her new movie, Vacation Friends, will premiere on Hulu this year where she stars opposite John Cena and Lil Rel Howery. Her debut book, Bamboozled by Jesus: How God Tricked Me Into the Life of My Dreams, which will be released in May 2021, and is now available for preorder.